4 days ago 0 6 min read
We use cookies to provide a personalized experience for our users. By continuing to browse this site, you give consent for cookies to be used.
Got it!
Home > News > Ottawa > Agriculture museum staff prepare for crowds returning to popular Experimental Farm attraction 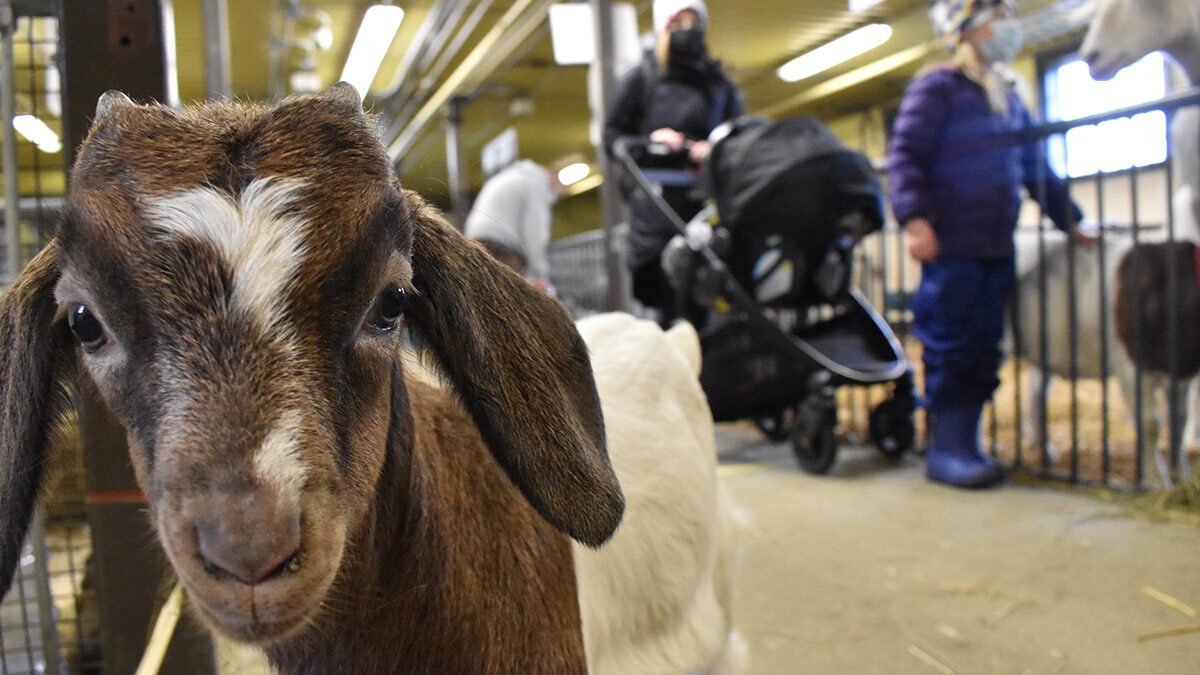 Houdini the baby goat inspects the camera while museum goers check out the farm's other animals. [Photo © Ben Andrews]
Agriculture

By Rebecca dePencier and Ben Andrews, 3 months ago 0 5 min read

Between pens of farm animals springs Houdini, an orphaned baby goat and this year’s ‘farm mascot’ — a casual designation seems to indicate which animal is a favourite of the workers.

“He’s a terrorist,” says Jim Ness, who breaks from bottle feeding nearby lambs to let the escape artist out for all to see.

“He jumps from pen to pen looking for his mom.”

Ness bottle feeds the animals as part of his job at the Canada Agriculture and Food Museum in Ottawa’s Central Experimental Farm. Unique among the national museums, the exhibits are populated by live animals rather than artifacts.

With spring slowly greening the outdoor paddocks, activity at the museum is ramping up to an almost pre-pandemic level.

Public health shutdowns caused attendance to plummet over the last two years, from around 200,000 annual visitors before the pandemic, to less than 35,000 visitors between April 2020 and April 2021.

During that stretch, the museum was closed to the public for months at a time. But staff are optimistic that crowds will return this spring.

“The spring, summer, fall – the museum is busier,” says Fannie Ribeyron, the museum’s director of visitor experience. “Last summer, for example, we were pretty much sold out in July and August.”

During quiet periods staff developed more virtual programming and worked in rotations. Ribeyron says the approach respected public health guidelines while also ensuring enough people were on hand to keep the animals “halter trained and handled” and accustomed to humans.

“So they wouldn’t have three months of just seeing like two or three people and then ‘Oh, visitors are back! I wasn’t haltered for three months and I don’t want to co-operate anymore,’” Ribeyron says.

In the absence of visitors, keeping the animals comfortable around people fell to Ness and his co-workers.

Ness drops Houdini from his lap and lets him strut around, entertaining a young visitor, before shepherding the baby goat back into his pen. He says Houdini may be smarter than the other baby animals in the main barn, but he has nothing on the pigs one short hallway over.

Down that hall, pigs of many types and sizes laze about or pace in their pens. A massive breeding boar, pink and scarred along his spine, pushes his snout against the metal bars. A mottled black and pink sow lays still while piglets roughhouse at her belly. In the corner of her pen, says Ness, piglets can stand under the red glow of a heat lamp installed “just in case” things get too chilly. But the pigs are smart enough, he adds, to take care of themselves just fine.

“You can litter train a pig easier than a cat or a dog,” he says. He points to the divided sections of the adults’ pens. They sleep at one end on a bed of hay. In the middle are some toys and a water trough, and the opposite end is where they do their business.

In the dairy barn, cows and calves turn a lazy eye to visitors. But despite museum numbers being down for the last two years, the daily movement of the dairy cows into the outdoor field has attracted more onlookers than ever before. “There were a lot of people gathering and coming to see the cows,” Ribeyron says.

Outside the museum, activity across the wider Experimental Farm increased during lockdowns. Agriculture Canada has no way to track these visitors, but Ribeyron could see when she was onsite that foot traffic had grown.

“We could see people, who were missing seeing the animals, coming to the fences and looking at the animals that were in the outside paddock,” Ribeyron says.

For the Berry family, visiting the farm has become a tradition. There were three generations of family farm-goers browsing the outdoor pastures one Thursday, the youngest just eight and six months old.

“We came as kids,” Kendra Berry says. “But it’s their first time.” Kendra starts to say she came to the museum every summer as a child, but Susan, the elder Berry, interrupts. Susan says they came multiple times each year, joining the rush of families and students that attend spring and summer programming designed with those age groups in mind.

But capacity restrictions stopped the museum from hosting school groups during the last two years. Instead, the farm has hosted online tours as part of its virtual programming. Though some find the change disappointing, it has improved access. “We were also able to reach out to schools that are outside the Ottawa-Gatineau region and across the country,” Ribeyron says.

“But they don’t get the smell,” Jill Berry says with a laugh when she learns about the new programming. The former teacher says she used to bring her students to the museum for class field trips.

“We used to make butter and stuff like that. It was a real hands on kind of thing,” she says. “Virtually? Not so much cuz you can’t taste the stuff.”

Hands-on programming is about to make a comeback. The museum’s summer camp program has been on hiatus because of the pandemic, but this year it’s back up and running. From June 27, 2022 to Aug. 26, 2022, kids can come to the farm for a full “country” experience, churning butter or even bottle feeding whichever goat, pig or cow staff have picked as the farm’s latest mascot.

IN THE NEWS: Wednesday, April 6