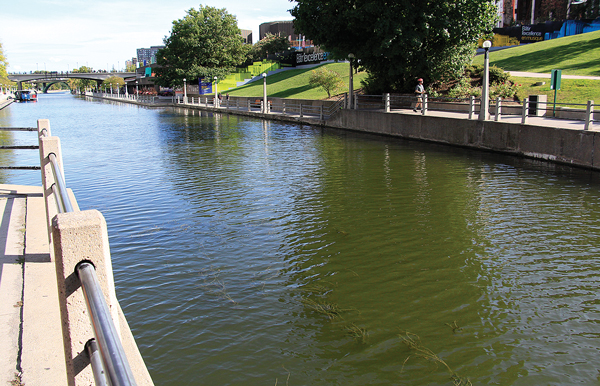 Recent tests have confirmed that blooms of potentially toxic blue-green algae have been found in Ottawa’s famous Rideau Canal.

After the Ontario Ministry of the Environment and Climate Change received reports of green-coloured water in the canal, samples were taken on Sept. 6 from areas near the locks beside the Château Laurier, Dow’s Lake, Carleton University and Mooney’s Bay.

“Sample results confirmed that blue-green algae was present at all locations, however (it) was significant enough at the Château Laurier and Dows’ Lake to be considered a bloom,” stated ministry spokesperson Thandeka Ponalo.

Martha Robinson, an extreme weather specialist at Ottawa Public Health, said she’s not surprised that cyanobacteria was found in the Rideau Canal, as it’s often present on the surface of warm water bodies in Ontario.

“Many of the areas of the canal have been impacted in the past,” she explained.

Although this bacteria has been found in other areas upstream of Ottawa, the algae has never been documented within Ottawa’s city limits.

Robinson said residents could have “hay fever-type symptoms,” similar to an allergic reaction, if they were to come in contact with the water.

“The more intimate you get with the water the more potential for more serious health effects,” she added.

“It could cause rashes, you might get headaches, vision changes, diarrhea, nausea, vomiting and difficulty breathing if you ingest it as a water supply.”

A group of students from Carleton University were in the Rideau Canal on the day the ministry tested for the bacteria.

Fourth-year psychology student Julie Sproulie, 20, was fully submerged in the water as part of her “final year bucket list,” she said, a tradition passed down from classmates who have since graduated.

“I’ve always heard rumours and jokes about the water being dirty but I never thought it to be potentially dangerous to my health,” stated Sproulie.

Over the following few days, Sproulie was alerted by friends to several articles about the algae, and its presence in the canal’s water stream. “If it was so serious, I wonder why they haven’t placed more obvious signage indicating the dangers of jumping in the canal,” said Sproulie.

This outbreak comes in the wake of a high-profile push this spring by Ottawa Centre MP Catherine McKenna for more use of the canal recreationally. She unveiled new canoe docks, and there was an increase in the number of canoeists and paddleboard users on the canal this summer.

There is no way to treat this bacterial outbreak, as herbicides and algaecides commonly break open these algae pods, releasing more toxins into the water stream.

“Prevention is the best way to control algae blooms,” said Ponalo. Robinson and the OPH are warning people to stay alert and be aware of your surroundings.

“Before any contact with the canal, check it out, make sure there is not a bad odour or that it doesn’t look unusual,” said Robinson. “It is a temporary situation that will clear up.”