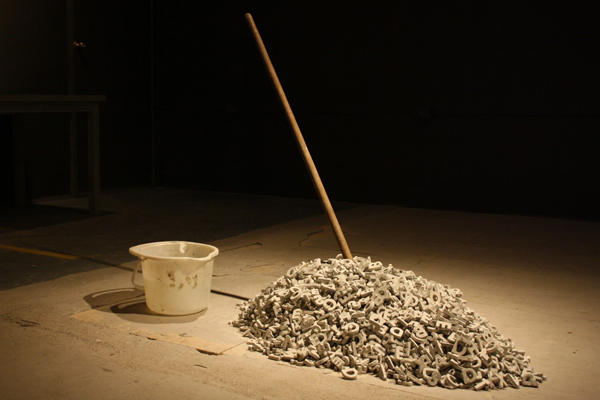 Ottawa artist Christos Pantieras (below) highlights the ups and downs of dating in the digital world with quirky creations in his new exhibit Nice to "Meet" You at Gallery 101 in Little Italy. Jordan Omstead, Centretown News
October 12, 2016

Local artist Christos Pantieras has returned home for his first exhibition in Ottawa since 2012.

Nice to “Meet” You is a deeply personal reflection on romantic relationships in a digital age. Pantieras drew the inspiration for the exhibition from his online dating experiences.

“I’m happy to be showing in Ottawa because it’s my hometown,” Pantieras said as he put together the final pieces of the exhibition, which opened at Gallery 101 in Little Italy on Oct. 1 and runs until Oct. 29. “I’m eager to show people what I’ve done and where my work has gone.”

Pantieras keeps a box of letters at home, a history of exchanges with friends and loved ones before the Internet rose to prominence. This exhibition, he said, is similar to that box, a way to transform fleeting Internet messages into something permanent that can be reflected upon.

The cornerstones of the exhibition are three sculptures, each made of thousands of small concrete letters cast by hand. During the installation, Pantieras arranged them into place piece by piece.

In one sculpture, HEY.HORNY.GRRRR., the concrete letters spill out of three white buckets and stretch across the floor, spelling out various messages in the middle of the gallery. Those words and phrases, which range from mild to obscene, were some of the first greetings Pantieras received on gay dating apps such as Grindr and SCRUFF.

“It’s a record of everyone’s ‘hello’,” he said. “You can be aggressive, very pointed, very direct online. So, I’m putting it out there because no one sees these except for people that are engaged with those apps.”

Laura Margita, Gallery 101’s curator and director, appreciated the subtlety of Pantieras’s work. “The message isn’t hammered right into you,” she said. “You can come at it from different angles.”

“I guess looking at this pile of letters, it’s all a big jumble now,” said Ottawa resident Robert Cross as he inspected the sculpture during the exhibition’s opening night. “When we do make sense of it, it seems almost absurd.”

Hanging on the wall alongside the sculptures are pieces of carbon paper with a cryptic arrangement of letters, which together are entitled I Keep Coming Back To You. Each piece of paper has been fed through a typewriter with a single letter hammered repeatedly onto each line. The text, read vertically rather than hori
zontally, is taken from emails sent from a former lover, who every so often would write to Pantieras hoping to rekindle the relationship.

“I don’t want people to necessarily read everything,” he said of the piece. “I want them to take the time to decode it themselves if they’re willing to do that, and if not then it’s just okay to look at it as binary or as this codification of words.”

While each work touches upon different relationships and experiences, Pantieras said there is a common purpose behind every piece.

“It’s really about taking the time that was never invested in the relationship or the online
connection and then putting it into the making of the work,” he said. “That’s what my work is really about.”

Nice To “Meet” You is the final product of a two-year Master of Fine Arts program at York University in Toronto, which Pantieras completed in 2015.

Before applying to graduate school, he had been pursuing his artistic passions on a part-time basis for nearly 20 years while teaching in the Ottawa public school system.

“I took a leave of absence from work and I did a complete 180,” he said. “I rented out my place, got rid of a whole bunch of stuff, and off I went.”

Longtime friend Dino Georgopoulos was all smiles
while he walked through the exhibition on Oct. 1. “I’m really proud that he took the time to make this his priority,” he said.

The exhibition runs from Oct. 1 to 29th at Gallery 101, 51 Young St. Pantieras will also take part in an artist talk and a mould-making workshop at Lansdowne Park on Oct. 15 and 16 as part of the Maker Faire Ottawa Festival.