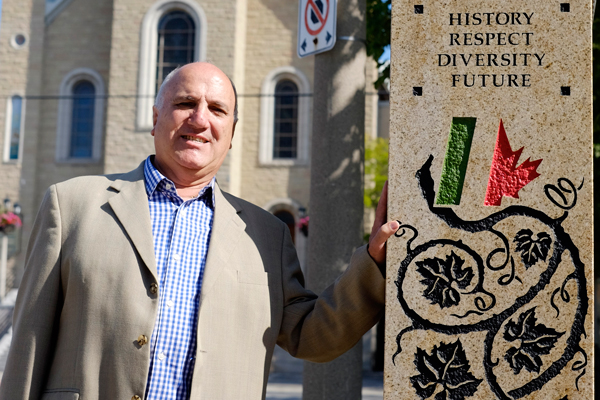 A local food retailer with deep Centretown connections has received a special tribute from Ottawa Mayor Jim Watson for his business leadership and charitable contributions in the city’s Italian-Canadian community.

Nicastro was recognized, in part, for his longstanding support for St. Anthony of Padua Church on Booth Street.

The award is a “civic honour created to recognize an individual, group or organization that has demonstrated an extraordinary commitment to making our city a better place today and for the future,” according to a press release announcing the honour for Nicastro.

The council recognized Nicastro for his strong business leadership and his involvement with volunteerism among various community organizations.

The statement also said Nicastro “has become a pillar in the community, offering Italian culture to all.”

“It was an honour for me, for my family, and for the Italian community,” Nicastro told Centretown News.

An Ottawa resident for more than 50 years, Nicastro came to Canada in 1966 and is the fourth generation in his family to run Nicastro Fine Foods.

The Ottawa branch of the business was opened in 1972 by Nicastro’s father and uncles on Gladstone Avenue in Little Italy before relocating to an expanded site on Merivale Road. The Nicastro clan also has separately owned stores across the city in Wellington West and the Glebe.

Nicastro is a founding board member of Villa Marconi, a retirement home on Baseline Road, and he and his family are long-time parishioners at St. Anthony’s.

“I like to give energy of myself, whatever I can,” he said.

Felix Loganathan, parish priest of St. Anthony’s, said the Nicastro family has always been present and active in every church function or outreach effort, with Nicastro being an integral part of fundraising committees in the church.

Loganathan said the family is always ready to help with the numerous functions of the church and with other community organizations.

“The community likes him so much,” Loganathan said. “Whenever the community associations ask for help, he’s always ready to help them out.”

Pat Nicastro, Giuseppe’s son and owner of La Bottega Nicastro in the Byward Market, said he admires his father’s enduring commitment to the community.

“He still loves going to work every day. He likes giving back. His heritage is very important to him,” added Pat.

Pat said he admires how his father is always so willing to help when people come to him.

He said in particular, his father’s commitment to giving back to the residents in Villa Marconi stems from how many of the residents there were originally frequent customers of Nicastro Fine Foods.

“I think that’s important to him. That’s why he loves to give back to that charity because it’s a lot of people he’s known all these years, customers of his, and now they’re at an age where they need help,” Pat said.

“Ottawa has given me so much over the last 50 years, and it’s been my pleasure to give back,” said Giuseppe Nicastro. “I continue to be committed to this wonderful city.”