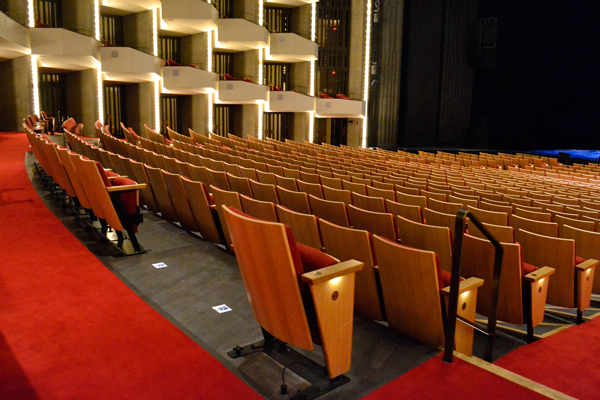 The National Arts Centre held an official opening ceremony on Oct. 2 to celebrate the completed renovations of its biggest theatre: Southam Hall. The project cost $5 million and took about three months to complete.

The event took place in the theatre itself and was attended by about 2,000 people. The unveiling began with a bang when suddenly dozens of cheerleaders with NAC T-shirts and coloured pompoms emerged from every door, dancing down the aisles. The refurbished Southam Hall’s first performance was met with enthusiastic applause.

The speeches and ribbon cutting didn’t take long. Within half an hour, everyone was up and exploring; taking selfies in front of the stage and running their fingers along new wooden chairs.

The renovations added two aisles vertically down the orchestra level seats and one horizontal one near the back in order to improve accessibility for patrons. Because of the aisles, about 250 seats were removed from the original 2,331. However, there are more places to accommodate wheelchairs.

“We’re taking this opportunity to improve accessibility throughout the NAC,” said Carl Martin, a senior communications advisor with the NAC. The addition of new aisles, he said, “It modernizes the hall and improves the flow so you’re able to get to your seat whether your able-bodied or not.”

Before the refurbishment, the only places wheelchairs could view the stage were at either side of the seats at the orchestra level on the lowest section of the floor. Now they can watch from the elevated back row and be more centered. The maximum capacity for wheelchairs is now16 as opposed to eight.

Irene Bond was at the opening ceremony, perusing the revamped theatre and commenting on various attributes. “I like the colour,” she said. “It’s brighter… it’s nice that they’ve got spaces for the people in wheelchairs and their companions.” However, she voiced concern about the lack of railings near the side aisles as well as the addition of steps to get to the seats at the very back.

Steven van Gulik and Freza Zweifel play the trumpet and timpani respectively in the NAC Orchestra, which uses Southam Hall as both its rehearsal and performance space. While the first official performance isn’t until Oct. 6, the orchestra has rehearsed in the hall.

“I definitely noticed a difference,” said van Gulik. The two musicians agreed that the acoustics are better, warmer, and have more resonance, but that the sound is not quite perfect. Changes are still being made and will improve production equipment and lighting, though these changes are still in the planning stages.

The wooden backs and new cushions aren’t the only things changing about the seats. The NAC Foundation, an organization which raises money for the NAC’s work across Canada, is running a fundraiser in which people make donations in exchange for having a name engraved on a plaque that will be placed on the front of a seat.

“The wonderful thing is that because the seats are already paid for, the renovation is done, the funds go to support performance and creation and learning at the NAC,” said Bronwen Dearlove, senior development officer at the foundation.

In order to earn seat-naming rights, donors must contribute a minimum of $5,000 over five years.

The first performance in the renovated Southam Hall was on Oct. 6, when Joshua Bell performed the Brahms violin concerto with the NAC Orchestra.