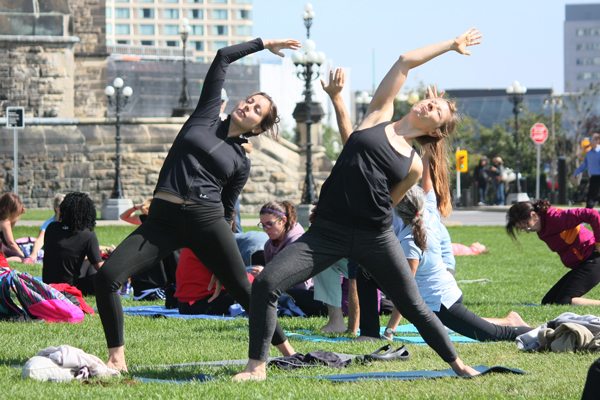 After 23 years of dedicated teaching, Robert Hay, founder of the Rama Lotus Yoga Centre on Gladstone Avenue, has said goodbye with a farewell class as he focuses his attention on his Yoga Garden Retreat near Wakefield, Que., about 30 minutes north of Ottawa.

“I have trained hundreds upon hundreds of yoga teachers and I love the space (at Rama Lotus), love the community,” said Hay. “Now, it feels like it’s time to find a new direction, still involved with teaching yoga and serving people but through the Yoga Garden Retreat.”

Hay says that by opening up Ottawa’s first yoga centre, “It spread yoga throughout Ottawa, shifting the culture a bit.”

He takes pride, too, in the fact that it was one of Rama Lotus’ teachers who started yoga on Parliament Hill about 15 years ago.

It’s been a bittersweet goodbye for his students and co-workers. “All of us are going to miss having him around because he is a really positive presence at the studio,” says Shamit Tushakiran, an employee and teacher-in-training at Rama Lotus.

In 1994, Hay founded Rama Lotus with the intent to have a space dedicated solely to yoga, where he could foster the right atmosphere. In addition, Hay says, “I wanted to change the world through yoga.”

“His personality is really what made Rama Lotus what it is today. But, he established Rama Lotus a long time ago and it has grown into its own entity at this point and that’s going to continue as it is,” says Tushakiran.

Hay estimates that, over the years, more than 100,000 people have walked through the doors of Rama Lotus.

Prior to opening the Centretown studio, Hay, like many other yoga teachers, taught in his own living room or at various community centres in the city, “but it was never the right space,” he said.

After studying the Models of Social Change, a sociological perspective, Hay says he realized the potential of yoga “to help change culture and society in a larger way beyond the individual.”

“I think the difference with him is the idea of balance and self-acceptance — it’s a big theme throughout his work,” said Lauri Cabral, a yoga student who has been studying under Hay for 15 years. .

For Tushakiran, Rama Lotus was “something intangible.” He said: “When I came in, it just felt like a comfortable space, a safe space and I felt welcome here.

“I think,” he added, “that what sets it apart, we have clients of all ages, races and body types, and all ability levels.”

Looking forward to more time spent developing his retreat, Hay said: “I’m trying to achieve something different than the RLC, so people have the opportunity to take a step away from their busy lives.”

Reflecting on the roots of the business, Hay said that, “Rama Lotus has been a major part of my life for about 23 years. Now complete. Wow. There’s a sense of not the end, but some finality to it.”