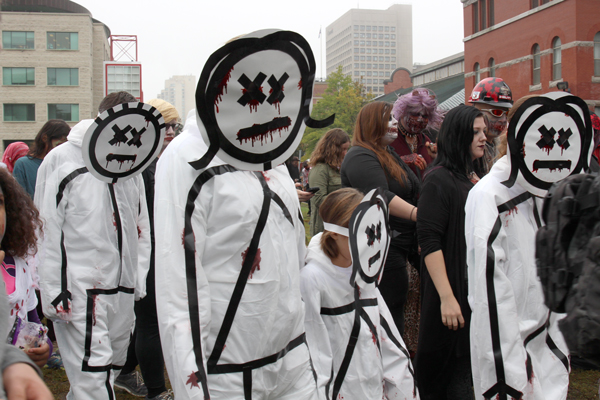 Ottawa had another successful Zombie Walk early this month, but each year the organizers struggle to gather enough funds to hold the morbid parade.

The rains of Sunday, Oct. 2 didn’t stop hundreds of zombies from marching through the streets of Centretown.

The army of living dead, covered in fake blood and ragged clothing, headed from City Hall to Parliament Hill, desperately pleading with passersby for nourishing “Brains!”

But over the past few years, the zombies of Ottawa have not been sure that their favourite event will actually take place.

“There is a bit of a struggle trying to raise money for the event,” said organizer Bradley Craig.

The event began in 2008 when 20 students from the University of Ottawa were walking down the sidewalk.

Now, the event attracts up to 2,000 people each year and involves road closures. In 2013, the event also started to raise money for the Ottawa Food Bank.

As the event grew bigger, the Zombie Walk organizing committee had to pay for police services, insurance, a rental fee for the City Hall gathering space and other incidental costs.

“We have to raise over $5,000 before we can even hold the event and raise money for the food bank,” said Craig.

The Zombie Walk relies on public fundraising through the crowdfunding website gofundme.com, where people can make a donation in support of the event.

A zombie dance and a poker night where also organized this year to help defray costs.
But it’s mainly through sponsors that it’s possible to hold the event every year.

The main one has been Audrey’s Costume Castle & Dancewear, a shop in Gloucester that has been donating make-up for the walk since 2013.

It’s a way for the shop to give back to the community, said employee Christine Houle, referring to both the walk itself and the emergency food supplies it provides.

“No child should go to bed hungry,” she said.

This year, the shop not only sold T-shirts and raffle baskets, but also provided the walk with the $2,500 that the Zombie Walk organizers were lacking to hold the event.

“After speaking with head office in Kingston, nobody at Audrey’s wanted to see this event die off,” said Houle. “It was decided that Audrey’s Costume Castle Ottawa would use part of their advertising budget to cover the balance required to pay police services, City Hall and insurance.”

Other sponsors include the Ottawa-based retailer Giant Tiger, zombieinfo.com, the metal warehouse Loucon Metal, and a new one this year : the horror attraction sKreamers, a volunteer-based fundraiser working for the expansion of the Kiwanis Adventure Park in Orleans.

“They were in need of funding. Because we know them, we decided to help them out,” said Josh Hérbert, one of the managers of the attraction. “They are super good friends of us. They support what we do, so we would like to support what they’re doing.”

sKreamers printed special tickets to help raise funds for the Zombie Walk. Volunteers also made private donations, which reached $500. Hérbert said the support was motivated by the fact that volunteers look forward to the walk every year.

“We are given an opportunity for people in the horror community to come together, socialize with each other, make connections,” he said. “If we didn’t help it happen, it would just deteriorate. It’s super important to us.”

Next year, Craig said, he hopes he will be able to obtain public funds to cover the cost of the event. That way, he said, “the $5,000 we are raising through the year, we can put it directly back in the community.”