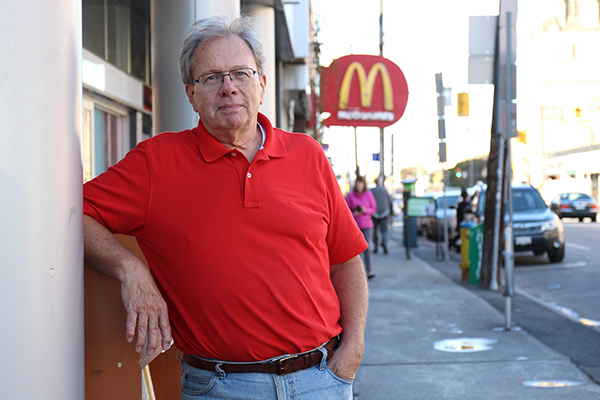 Major reconstruction of Elgin Street has revealed conflicting demands between the public and local business owners.

The project will see Elgin, between Laurier Avenue and Queen Elizabeth Driveway, redesigned from the sewers to the surface. The city will reveal a staff-recommended design in late November, and submit a revised draft for city council approval next March.

Construction is expected to begin in 2019 and last two to three years.

Public consultations held this summer found that many respondents want Elgin to be pedestrian-oriented, with wider sidewalks, more trees and painted bike lanes. But local business owners are concerned about the effects of a redesign, including reduced parking.

“If there’s little or no parking, and little or no delivery zones, we will struggle to survive,” said Jim Sherman, owner of Perfect Books.

“It’s very important to understand the impact of change before one begins a project like this.”

Sherman said his bookstore, located near the corner of Elgin and Somerset, receives truck deliveries three to four times a day.

John Couse, owner of Lieutenant’s Pump, between Frank and Waverley, isn’t as concerned.

“Parking is a contentious issue. More parking is always good for business. However, it doesn’t necessarily have to be on a major street,” said Couse. “As long as there are enough parking garages close by, I’d be OK with less parking on Elgin.”

“This parking design is flexible, as it allows the space to be used for other functions if needed, such as an increased pedestrian area for special events,” explained Chi.

Chi said flex bay parking would allow for a maximum of 70 to 90 spaces on the affected stretch of Elgin, down from 120 spots.

Chi said parking garages are not being planned. And as for loading zones, she said some may be relocated to side streets.

But another concern looms for stakeholders: the closure of Elgin Street to traffic for a portion of the multi-year construction period.

“I am dreading the construction. It is not going to be fun,” said Couse.

“Preston Street saw 12 businesses go under during their reconstruction. It is going to be really difficult.”

“Our business will be severely affected by the mess that ensues,” agreed Sherman. “We’ll probably have to reduce staff and hours, as well as come up with some clever innovations to keep our heads above water.”

Details of closures won’t be set until a full plan is developed, sometime after a functional design is approved by city council.

Somerset Coun. Catherine McKenney said she will work with business owners and hopes that the Elgin redesign will prove beneficial to all stakeholders.

“Some of the benefits that I hope residents would gain from the redesign are safety and comfort, and a wonderful place for people to visit in the heart of the city.”