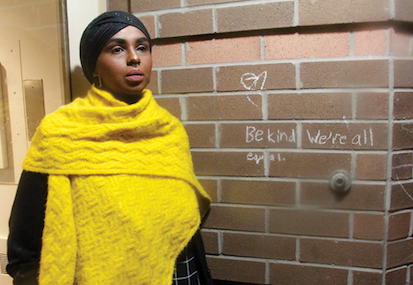 Dahabo Ahmed Omer, co-chair of the Justice for Abdirahman Coalition, stands at a makeshift memorial for Somali-Canadian Abdirahman Abdi, 37, who died in July after an altercation with police. Photo by Lysia Filotas, Centretown News
December 31, 2016

Ottawa’s police department is at odds with the chief commissioner of the provincial human rights body over how to address the fact that black and Middle Eastern people are much more likely to be pulled over for traffic stops than other motorists in the city.

The report drew from data on 81,000 traffic stops over a two-year period, and is one of the first of its kind in Canada.

“As the Research Team has pointed out throughout this project, the report does not conclude racial profiling, but it’s clear that there are variances and anomalies in the analysis that must be researched further,” Ottawa Police Chief Charles Bordeleau said in a statement. “We need to explore these findings further to understand the reasons for those differences.”

In a deputation to the Ottawa Police Services Board, Renu Mandhane, chief of the Ontario Human Rights Commission, said the findings are “entirely consistent” with racial profiling.

“For the required systemic change to happen, it is important that police services don’t focus their efforts on denying racial profiling and managing community expectations,” said Mandhane. “Instead, they must publicly commit to changing their practices, developing a human rights organization change plan, and then doing the hard work required to make that happen.”

Dahabo Ahmed Omer, co-chair of the Justice for Abdirahman Coalition — a group named for Abdirahman Abdi, a Somali-Canadian man who died earlier this year while being arrested by Ottawa Police — believes calling it racial profiling “makes a big difference.”

“By saying it, you’re acknowledging the issue as it is,” she said. “You’re saying here’s the issue and now here is how we’re going to face it.”

Omer also urged the police to do “tangible, concrete things the community can see” to fix the problem and rebuild trust.

“I don’t feel safe as a black Muslim woman; I do not feel safe. And that’s not ok.”

If I see a police car drive by me, I don’t feel safe

According to Chris Rheaume, acting superintendent with the Ottawa Police Service, there is a need for more data.

“You have to look at what time of the day people were stopped, were they stopped multiple times,” said Rheaume. “There’s a lot of questions that need to be answered and I don’t think we got them all just from this project.”

Lorne Foster, who co-authored the study, also sees room for future research, including studies into where potential racial profiling comes from, such as implicit biases in police leadership and tactics.

“I’d like to see this (study) be a baseline for people to create a conversation and create an action plan,” he added.

Amira Elghawaby, communications director for the National Council of Canadian Muslims, said she was pleased to see efforts by Ottawa Police Services to engage the public.

“It’s a very important and necessary signal that police show they are taking this issue seriously, and they are listening to the concerns of the community,” she said. “There has to be trust building, there has to be assurances that racialized communities are treated as any other community.”

Elghawaby also stressed the importance of police taking action to address community concerns, and called for “better training of officers around equity, inclusion, and racial profiling.”