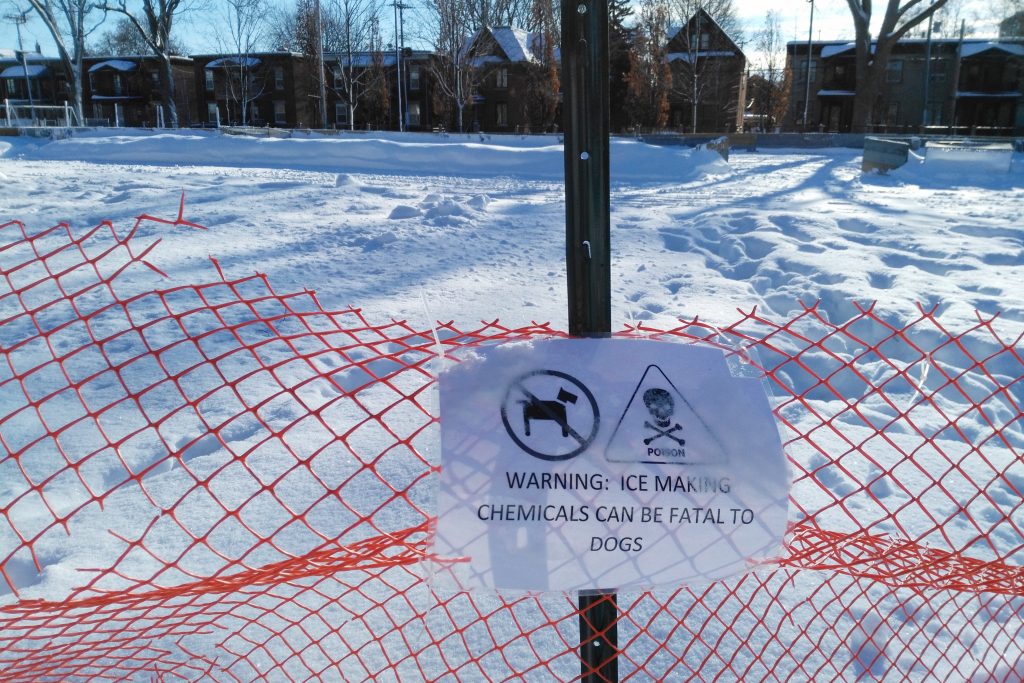 This sign was posted outside the rink at McNabb Park. Randy Boswell, Centretown News
January 26, 2017

Misleading signs around the outdoor rink at McNabb Park that warned about chemicals used in ice making — but were really just intended to deter dog owners from taking their pets near the ice surface — have since been removed, a city official said.

Dan Chenier, the City of Ottawa’s general manager of recreation, cultural and facility services, said the signs were not sanctioned by the city and were ordered promptly to be removed to avoid alarming local residents.

Chenier said in an email the signs were “installed by the contract outdoor rink operator to keep dogs away from the skating area.”

The signs showed a skull-and-crossbones poison symbol and a picture of a dog circled with a line through it. Underneath was the message: “WARNING: ICE MAKING CHEMICALS CAN BE FATAL TO DOGS.”

The city’s recreation department said that only water and snow are used to make the outdoor rinks located in city parks.

“No harmful chemicals to humans or animals are required or used,” Chenier said.

“Likewise, indoor arena ice is made of water and the shavings that are deposited outside arenas do not contain chemicals. The only addition to arena ice is non-toxic paint applied to the base layer of ice and this layer is only removed at the end of the season with any paint residue disposed of appropriately.”

Signs with the false warning were found posted earlier this month in various locations around the outdoor rink at McNabb Park. The signs warned pet owners who walk their dogs near McNabb Community Centre.

The park, located at the corner of Bronson and Gladstone, is a popular spot for community dog owners to get out and about with their pets.

Trevor Sylvain, a Centretown dog owner, walks his dogs Luna and Lily in McNabb Park often. He said that the signs concerned him enough to do some of his own research, but he couldn’t find any information from the city’s website.

“I was concerned that if I bring my husky into this snow from the rink she could potentially hurt herself,” he said.

Sylvain said that if the rinks were using chemicals, there would be a year-round concern that should be addressed.

“Having a Siberian husky, there’s often rink snow pushed up outside the community centre arena in the fall and summer time, and because she’s hot in the summer I’ll bring her there to romp on it.”

Though dog owners can rejoice at the fact that their dogs aren’t in immediate danger from the ice, Sylvain said this revelation isn’t assuring.

“I can understand wanting to keep dogs off of the rink because I like to play hockey, too, and I like to skate and it can be dangerous having dogs on the ice like that. You wouldn’t want an unpredictable animal on the ice,” he said. “But maybe it’s better to just explain that from the correct perspective instead of using something that’s not factually true. I think if people are more likely to discover that this is a lie, they will be less likely to follow the rules.”

Chenier said that his department has since contacted the outdoor rink operator to ask for a sign to be posted prohibiting dogs on the ice.