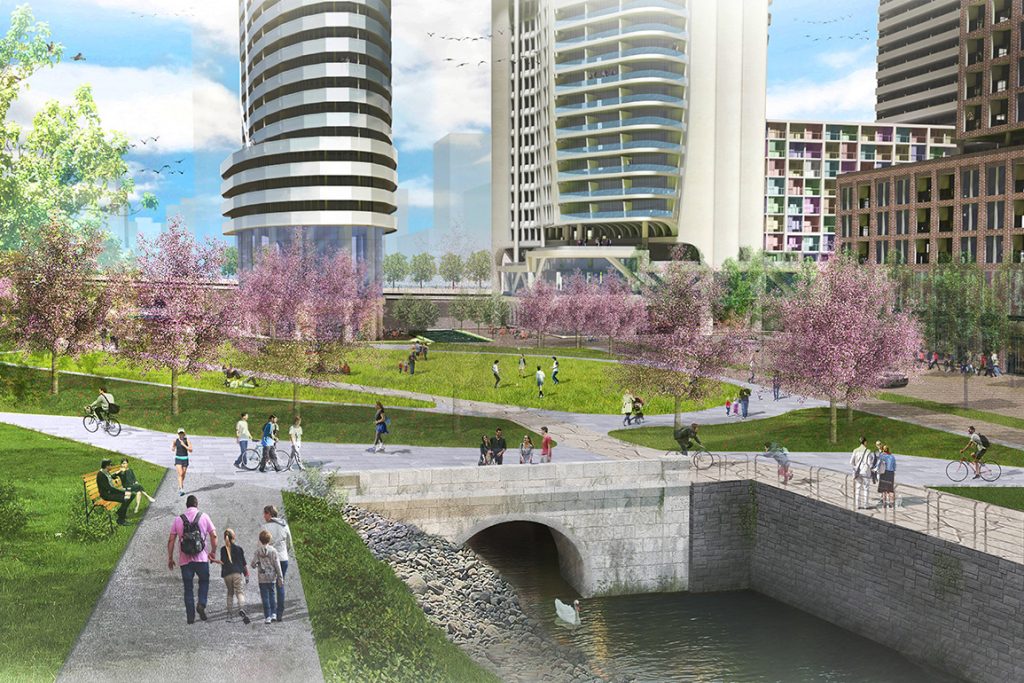 Claridge Homes has unveiled fresh plans for a five-building development at LeBreton Flats — including a 55-storey residential tower, potentially the tallest in the city — but criticisms from the community about the height of the structure may see a few floors shaved off the top.

The plan, which was presented to the public for the first time on Jan. 9, includes one 30-storey and three 25-storey towers in addition to the 55-storey building.

All are described as mixed-use residential, meaning they would include space for retail or commercial use.

Members of the community, including Somerset Coun. Catherine McKenney, said they fear the tallest tower could overshadow the neighbourhood.

McKenney said that although adding population density with added height is not necessarily bad, the effect on public space and community life on the ground must be considered, and 55 storeys is “not what existing residents expected.”

She said the development’s neighbours, who also live in Claridge Homes apartments, were expecting the buildings to be about 15 to 20 storeys high, about half of what’s now being proposed for the tallest tower.

However, more height means more people either living or working in the area, with easier access to the Light Rail Transit station that will soon open nearby, and more effective, environmentally-friendly development.

But “in this case, the sentiment seems to be, or is, that it is too high,” McKenney said.

Danny Brown is a planner at Urban Strategies, the design and consulting firm working with Claridge Homes on the project. He said the partners are still “incorporating feedback” for an official application to the city.

He acknowledged that the height of the tallest tower “might change in the fullness of time.”

McKenney said there are certainly many positive, “exciting” aspects of the refreshed development plan. For example, the project fronts directly onto Booth Street, so that people can easily access this central artery.

McKenney said the key concern among area residents is the main tower’s soaring height and fears it may cast shadows on the existing neighbourhood. She said it “needs to complement what’s already there.”

The ideal, McKenney added, would be a development with plenty of green space, active park space — meaning not just grass, but areas built for congregating — and amenities, so people can live, work and play nearby.

Brown stressed the project is an “ongoing and evolving concept” and that feedback from the community is welcome.

“By no means is the project frozen in place, and by no means have we stopped working on it,” he said.

Despite the contested height, many aspects of Urban Strategies’ plan have been praised, namely the convenient access to Booth Street, something Brown called the “main constraint” of the design process.

“It’s been a tricky thing to address how we bring a building and meet it up against a road that is elevated across the aqueduct,” he said about a water channel that crosses  part of LeBreton Flats.

Eric Darwin, a community activist who blogs on urban planning and transportation issues, said the best thing about the plan is the return to traditional architecture.

A former Transport Canada employee, Darwin is concerned with how details of urban plans affect communities. He said Claridge’s proposed new development exhibits “superior architectural design” compared with other buildings around the city. But he added that there is always a gap between the plan and what actually gets built, and he expects the height of the main tower will be lowered.

Darwin said the construction period is the most “vulnerable point.” Most developments start by building towers, while amenities and green space aren’t completed until residents are moved in, which could take years.

Darwin argued that the reverse should be the norm, so that the people-friendly amenities draw in residents.

“They draw a circle around the station and say, ‘Anything within that is walkable,’” he said. But that forces residents to walk around construction. “The city doesn’t consider things like that,” he noted.

“You can walk for three miles, or do a two-hour commute, but if the last 30 feet is muddy, you’re not going to do it,” he said.

The next step is for Urban Strategies and Claridge Homes to submit an official application to the city. From there, the planning department makes recommendations before it goes to city council.