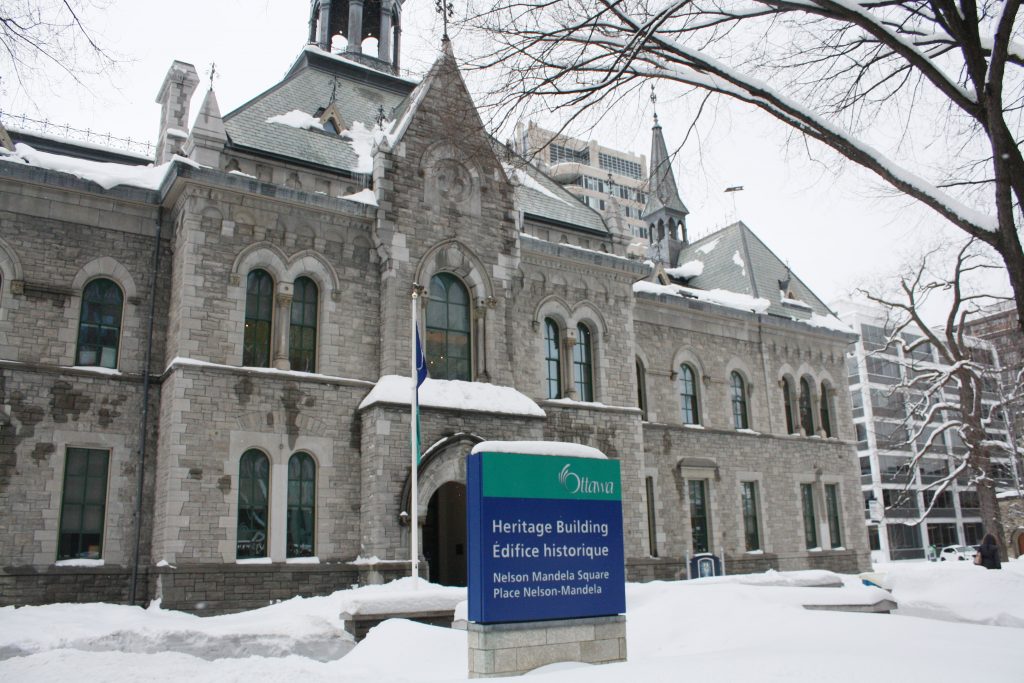 The former Ottawa Teachers’ College on Elgin Street will someday be home to a new Centretown branch library if Somerset Coun. Catherine McKenney gets her way.

If the first floor of the heritage building — built in 1874 and now part of city hall — were to become a library branch, McKenney said in a recent blog post, it would be preferable to a “mini-library” elsewhere at city hall, as suggested by Ottawa Mayor Jim Watson.

Construction is expected to finish in 2020 on the city’s new $168-million Central Library on the eastern edge of LeBreton Flats, a planned joint facility with Library and Archives Canada.

The controversial decision on that location was finalized earlier this month in near-unanimous votes by both Ottawa Public Library Board and city council.

The planned site at 557 Wellington St. was contested by McKenney, many downtown residents, the Centretown Citizens Community Association and advocacy group Bookmark the Core for reasons ranging from lack of easy accessibility to the Flats area and its distance from the site of the current Main branch of the library.

The chosen site had been favoured by Watson, board chair Tim Tierney and others because it’s city-owned land close to the soon-to-be Pimisi LRT station.

When the new facility is built, the current central library, at Metcalfe Street and Laurier Avenue, will shutter, leaving core-area residents without a library within easy walking distance.

“In a vote at my recent public open house on the new library location, some 93 per cent of attendees said that if the new library were to go to 557 Wellington Street (the Flats location) they felt strongly that the Centretown community should have a branch library to fill the gap and serve one of Ottawa’s most densely populated neighourhoods,” McKenney wrote on Feb. 9.

Watson had suggested that the Ottawa Art Gallery Annex room at city hall could be used for a mini-library — “some kind of a mini drop-off, drop-in centre,” he told the Ottawa Citizen in January — but McKenney said that an entire floor of the old Teachers’ College would be more appropriate.

“As of right now, the City is simply proposing a potential depot at City Hall, which would not come close to meeting the needs of Centretown residents,” downtown library advocate Emilie Taman told Centretown News. Taman is the co-chair and spokesperson for Bookmark the Core, an advocacy group that fought to have the city’s planned new Central Library built closer to the site of the current Main branch. “And while there may, indeed, be a ‘push’ for a downtown branch, I don’t see the city committing resources to that any time soon.”

The city’s portion of the $168 million for the new Central Library would be $99 million, according to estimates, and the establishment of a new Centretown branch library would involve additional costs.

During the site selection process for the new central library, McKenney was the only Ottawa Public Library Board member and city councillor to vote against the LeBreton Flats location.

A major concern has been the steep slope separating the city’s core from the Flats, making it inaccessible to people with mobility issues.

“My first choice was to see a new Central Library in a location that is convenient, accessible and welcoming for the largest number of users,” McKenney wrote. “However, now that City Council has determined by a majority vote that it will be at 557 Wellington, I intend to look for options to best serve Centretown.”

McKenney said that adding a community and cultural space to the Teacher’s College would also enhance the national historic site.

The former Teacher’s College was built in 1874, and designated a national historic site 100 years later when the school merged with the University of Ottawa’s Faculty of Education and the building was vacated. It was later purchased by the city from the federal government and became part of city hall. The building, which today houses the mayor’s office, is formally known as the Heritage Building.

Linda Hoad, vice-president of programs at Heritage Ottawa, said that because the building has already been adapted to serve as part of city hall, an additonal use, such as a branch library, “has no heritage implications.”

CCCA president Tom Whillans said there has been no official vote on his board about a preferred location for a branch library, but that “the idea of having a branch library is something we can unilaterally agree is a positive for our community.”

He called McKenney’s idea an “interesting choice,” with “unique circumstances” because it’s a heritage building.

McKenney wrote that the branch should fill three main requirements: “A place to drop off and pick up books, access to free Internet and technical services, and a community meeting and gathering space.”

Eighty-one per cent of current central library users arrive on foot to the Main branch, according to McKenney’s post, which added that 70 per cent of users are residents of the immediate area, and almost a quarter work downtown.

“Since it has been decided that the new Central Library will be built at the eastern edge of the Flats, this large percentage of users will be without a convenient and accessible library location,” she wrote.

Whillans said that after the long site-selection process for the Central Library, members of the CCCA are taking some time before they gear up for the next phase of debate.

“Energies are spent, but once we regroup, we will really be able to focus on what the potential benefits are for a site like this, and we’ll be able to get on board with the proposal of our councillor,” he said.

McKenney added that funding could come from the campaign for the new building, and encouraged residents to give feedback on her Teachers’ College suggestion.