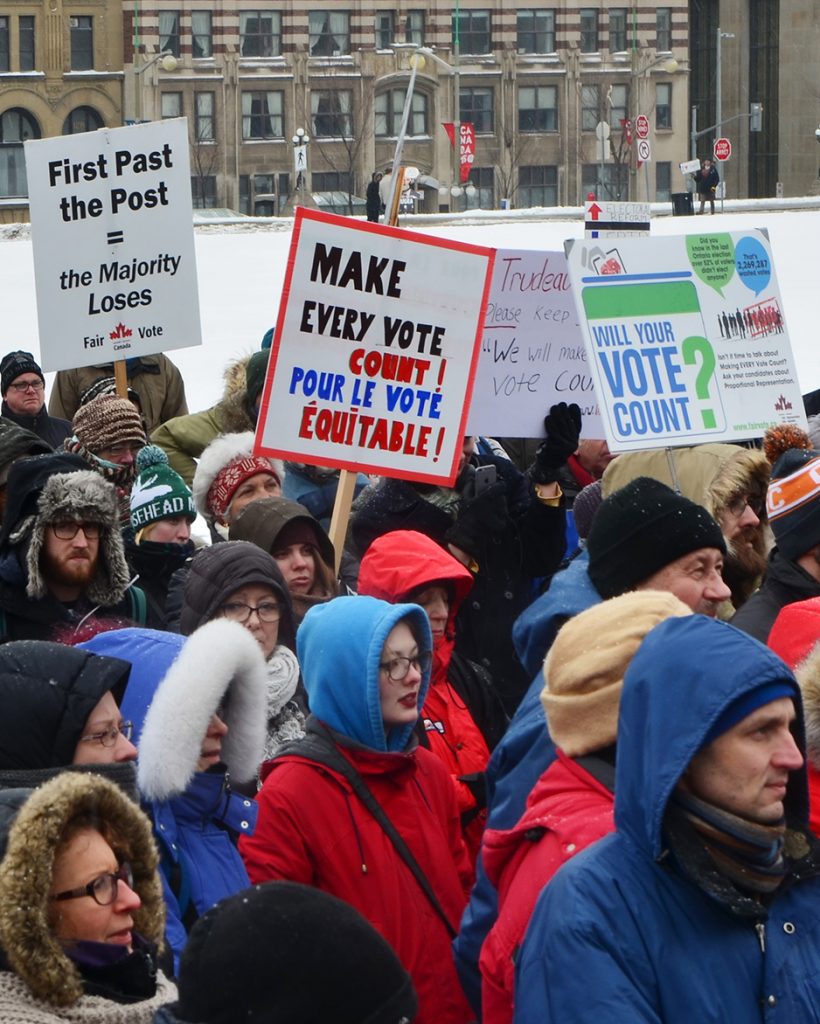 Protesters called Prime Minister Justin Trudeau out on broken campaign promises during a week of action aimed at pushing for electoral reform in Canada.

On Feb. 11, demonstrators gathered on Parliament Hill for the second time in a week to express their desire for a change from the first-past-the-post voting system.

Protesters braved the cold, voicing chants such as “make every vote count” and “keep your promise” in unison while holding signs emblazoned with “our democracy is broken” and other phrases.

On Feb. 1, it was announced that the Trudeau government would no longer be pursuing consultations on electoral reform — a platform point that the Liberal party had showcased throughout the 2015 federal election.

A special committee examining the subject has recommended that the government hold a referendum on the idea of replacing the current electoral regime with proportional representation.

The current first-past-the-post system elects the Member of Parliament with the most votes in a riding. But with Canada’s multi-party system, elected MPs often, in fact, receive less than the majority 50 per cent of the vote.The system may also push voters to vote strategically in order to support a second-favourite candidate to prevent the least-favoured party from winning the seat.

The NDP and Green parties were seen to have suffered from strategic voting in the 2015 election because many voters who might have supported those parties — but were determined to oust the Conservative government — backed the Liberals as the party with the best chance to win.

Proportional representation would help smaller parties that gain large numbers of votes but don’t tend to finish first in the current system. Under a PR system, their representation in the House of Commons would better reflect the number of popular votes they receive. Depending on the type of PR system, more than one member could represent a riding.

In a mandate letter to Liberal MP Karina Gould, who was named Democratic Institutions Minister in a Jan. 10 cabinet shuffle, Trudeau stated that the subject of electoral reform would be closed due to a lack of consensus on the solution and what he has called a lukewarm interest among the general public in the issue.

The Trudeau government chose not to begin planning for a referendum, said Lavergne, because a PR system isn’t what they wanted.

Trudeau has expressed his own support for a so-called “preferential ballot” system, which would see voters identify both their first and second choice amongst election candidates. It’s widely believed such as system at the federal level would favour the centrist Liberal party, the backup option for most Canadians who back the NDP or Conservatives.

“This (widespread support for PR) was clearly what Prime Minister Justin Trudeau did not want to hear,” Lavergne  said. “He had the nerve to say, ‘there is no consensus.’”

“This is a struggle for our democracy,” said Ashton. “We will not stop until we have democratic reform.”

Nira Dookeran, Green Party candidate for Ottawa-Vanier, told the crowd that the Liberal flip-flop will make voters lose confidence in the government and in politics.

“It’s hard to believe in anything anymore — we grew in confidence that you were the one that would just be different,” she said, referring to Trudeau.

“Was it all just a façade from the start? We are losing faith fast,” she said.

Following the last day of the National Week on Electoral Reform, which ran from Feb. 5 to Feb. 11, organizers encouraged voters to continue pushing for change in the Canadian voting system.

They are calling on voters to call and write to local MPs to encourage them to move forward with electoral reform.

An online petition to the House of Commons has also been created to support the cause. Sponsored by NDP MP Nathan Cullen, the petition calls on the government to continue consultations on electoral reform and as of mid-February had attracted more than 116,000 signatures.