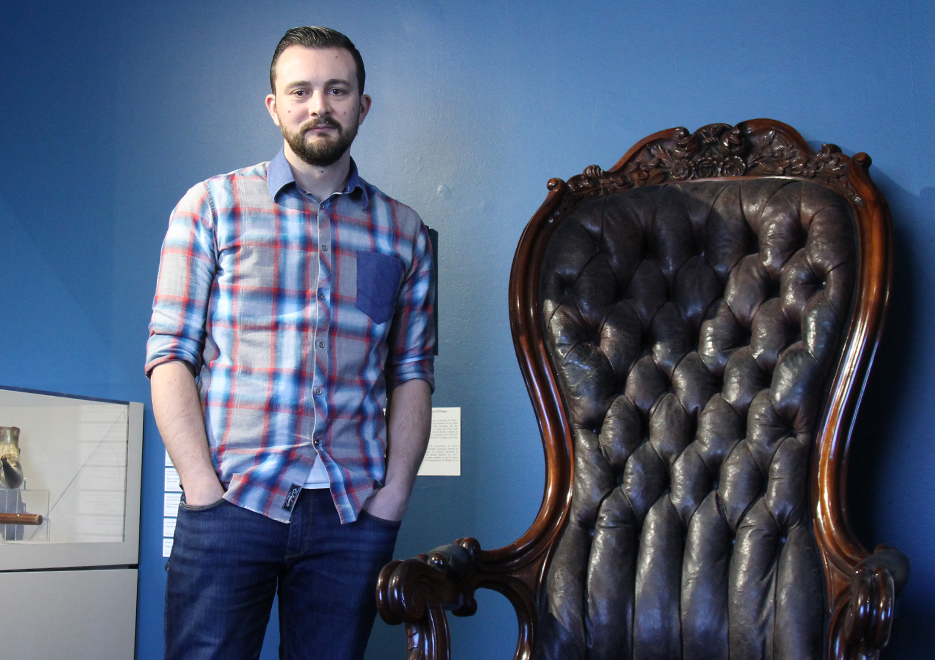 Grant Vogl, the collections and exhibitions manager at the Bytown Museum, stands next to the chair of Ottawa mayor Fred Cook, which was donated to the museum in 1902. Alexandra Mazur, Centretown News
March 28, 2017

Artifacts and pictures tell 100 stories about Ottawa’s history at the Bytown Museum as part of a new exhibit celebrating the heritage hub’s centennial.

“They all have great stories to tell,” said Grant Vogl, the museum’s collections and exhibitions manager, of the pieces featured in Bytown Museum: A Century of Community.

Vogl curated 100 of the museum’s photos and artifacts to be featured in the exhibition. Fifty are housed in the community and temporary galleries, while the rest are interspersed throughout permanent exhibitions.

With over a century’s worth of artifacts opening a window to Ottawa’s past, different stories stand out. Two historic photographs of loan exhibitions held in 1899 on Sparks Street — that featured items loaned by the public for display — help tell a dual story of the city’s history and the museum’s own origin, as an initiative of the Canadian Women’s Historical Society of Ottawa.

“They did travelling exhibits, they did research, they did publications,” said Robin Etherington, the museum’s executive director. “They were an amazing group of women.”

The CWHSO began curating war artifacts and collecting pieces from Ottawa’s early roots as a booming lumber town in 1898.

“It’s a really great story that we were started by this group of women, all volunteers — and the men weren’t allowed in until 1955,” said Vogl, who highlighted the museum’s ties to the CWHSO on International Women’s Day on March 8.

Visitors looking at the two photographs will see some familiar pieces in the Century of Community exhibition, such as Lt.-Col. John By’s armchair and Bytown’s first letterbox. The armchair with upholstered gold and green fabric was one of a set of two belonging to the colonel, who oversaw the construction of the Rideau Canal, which is celebrating its tenth year as a UNESCO World Heritage site. The letterbox comes from the city’s first post office in what is now the Hudson Bay Company on Rideau Street.

“People don’t change, but time does,” said Stéphanie Poujade, the museum’s programming coordinator. She pointed out how seemingly simple artifacts can reflect Ottawa’s past and present.

“Centretown is known for its construction,” she said, pointing to a tool kit on display. “It’s a lot of tools that we’d still use today…  but they did so much with so little (then).”

Fred Cook, Ottawa’s mayor in 1902-03, gifted his chair to the museum in 1917 — the same year it opened its doors. Clad with carvings from the British Isles and upholstered in leather, it is a popular feature of the exhibition today.

The CWHSO first opened the Bytown Historical Museum on Sparks Street. It moved into its current residence — Ottawa’s oldest stone structure — in 1952.

Vogl said the museum was the only community hub to tell Ottawa’s history, thanks in large part to the CWHSO.

“We have to really thank the women for looking ahead and founding the museum at that time.”

Poujade also mentioned the museum’s present location in Centretown, on the edge of Lowertown, as being at the heart of the original settlement.

Nestled between Parliament Hill and the Château Laurier, the Bytown Museum sits amongst Ottawa’s most prominent landmarks and is sharing its own milestone with one of Canada’s biggest years: the 150th anniversary of Confederation.

“This is the coming of age of Ottawa,” said Etherington. “This museum is about the history of Ottawa but it is also about the future of Ottawa.”

Etherington said while Canada celebrates its 150th, this is also an opportunity for Ottawa to honour its unique role as the nation’s capital.