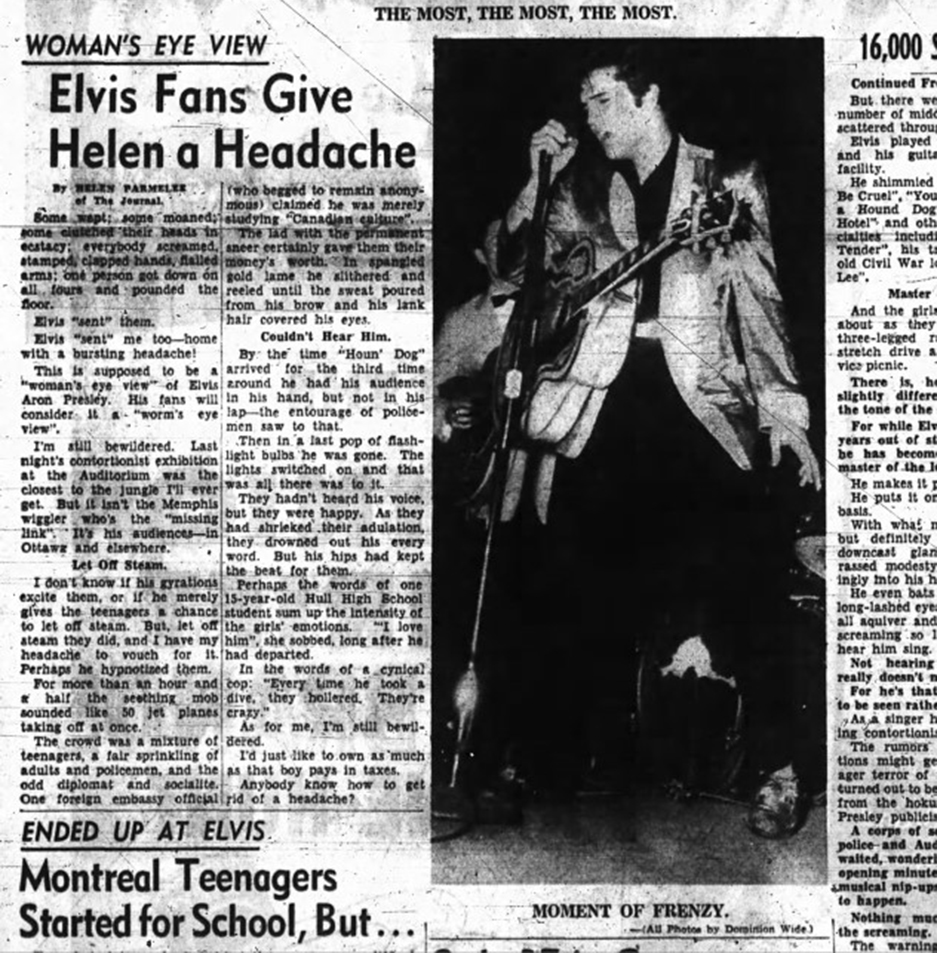 Two of the world’s best Elvis Presley tribute artists are coming to the National Arts Centre to celebrate 60 years since the “King of Rock ’n’ Roll” performed in Ottawa.

Elvis has long since left the building – more precisely, the Ottawa Auditorium, where he performed two sold out shows on April 3, 1957. Today, the site of the old ‘Aud’ is home to the Taggart Family YMCA-YWCA on Argyle Avenue in Centretown.

“16,000 See Elvis In Ottawa Shows,” read an Ottawa Journal headline the day after the concert.

In honour of the event, Elvis tribute artists Ben Portsmouth from Berkshire, England, and Cody Ray Slaughter, from Harrison, Ark., will take the NAC stage on April 4 for a special commemorative concert called “The King is Back.”

“Let’s put it this way, you will never see this show again,” said Aysha Johnson, the concert organizer and the self-proclaimed “biggest Elvis fan north of the border.”

“For one night only, I have not one, but two of the world’s best Elvis Presley tribute artists performing on the same stage,” said Johnson. “It’s common in the United States, but to get two on the same stage up here in Canada is pretty rare.”

Elvis Presley tribute artists are known to some as Elvis impersonators. Both Portsmouth and Slaughter have won the title of Ultimate Elvis Tribute Artist, a competition held every year in Memphis, Tenn.

More than 25 preliminary contests for the ultimate showdown are held by various organizers around the world, including the U.S., Canada, England, Australia, and Brazil.

The winners of each contest then compete in Memphis for the title.

The organizers of the world-renowned competition get approval from Elvis Presley Enterprises to look for the performer who best represents the legacy of the King when it comes to vocals, style, stage presence and overall performance. The contests are held to keep Presley’s memory alive.

Johnson, an office worker by day, who occasionally dabbles as an event organizer, said that although she has enjoyed attending numerous Elvis festivals in the U.S., it was time to bring Elvis back to the nation’s capital.

“I got tired of traveling, so I thought why not bring the show to me!”

After mulling over the idea of creating a tribute concert for years, she said she realized that having the show in 2017 was the opportune moment.

Since the Taggart Family Y now occupies the original concert location, Johnson said she knew of only one other place that would be suitable for the tribute show.

“The anniversary concert needed to be at a prestigious venue and in Ottawa that is the NAC.”

“When someone rents a hall, we obviously have less control (over the nature of the show), but we look at it as a way to add diversity into our programming,” said Xavier Forget, associate producer for NAC Presents. “We are glad Aysha came to us.”

The first part of the show, Elvis ’56, features Slaughter with an authentic four-piece band to replicate the kinds of songs Elvis performed in the 1950s.

“These are all the songs that made him famous and eventually got him here in 1957,” said Johnson.

Although he will not be playing Presley’s original Ottawa setlist, Slaughter will be opening the concert with All Shook Up, the same song the rock legend started with in 1957.

The event will mark Slaughter’s first time in Ottawa and he said he’s looking forward to it.

“It is an honour to perform in the same city as Elvis did 60 years ago.”

During the second set, Portsmouth will be performing many of the King’s biggest hits from his concert years wearing one of Presley’s trademark jumpsuits.

“I enjoy making people happy by recreating Elvis the best I can and I hope they enjoy the performance,” said Portsmouth. “They keep coming back, so I’m doing something right.”

The Sweet Inspirations, including Estelle Brown — one of Elvis’s original back-up singers from the concert years — will provide Portsmouth’s back-up vocals, and leading the musical arrangement will be his own band from England.

“It’s exciting to have Estelle because she literally performed hundreds of shows with Elvis in the ’70s,” said Johnson.

In addition to the show, to commemorate this unique historic event, Ottawa Mayor Jim Watson will declare April 3 as “Elvis Presley Day” in the city.