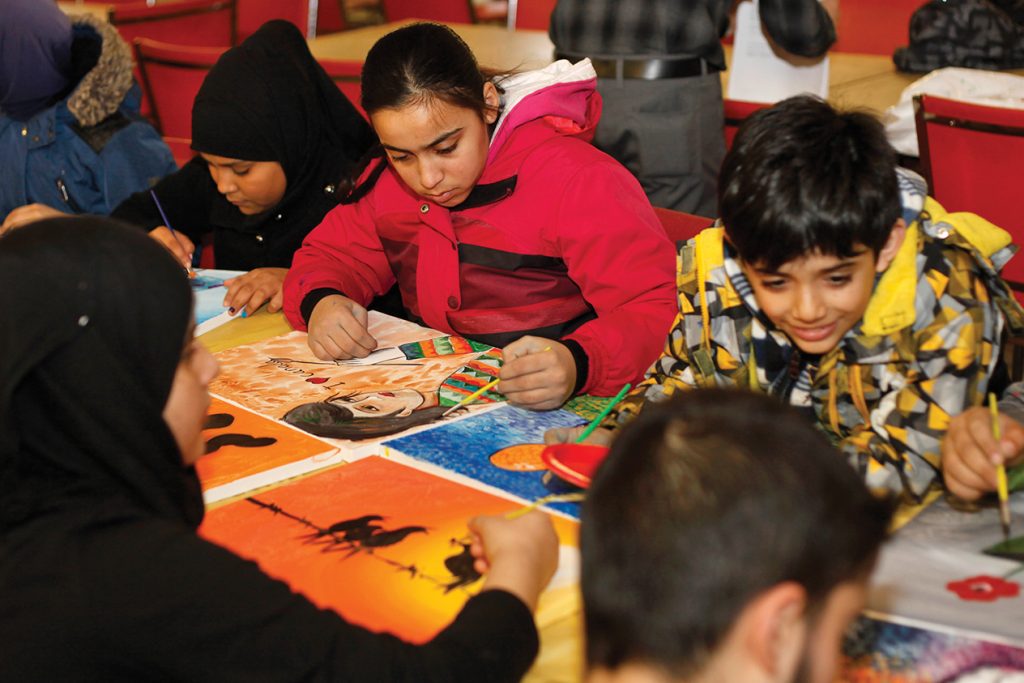 Imagine a bird flying peacefully in the sky, with a flower hanging from its beak. This image comes from the mind of 14-year-old Sara Ali. She is one of many Syrian refugee children who have made paintings for an art exhibit coming to Ottawa City Hall.

The Children for Peace – Heart to Heart art exhibit is the first of its kind organized by the Humans for Peace Institution.

All 40 paintings submitted by Syrian refugee children will be auctioned and the proceeds will go to the Children’s Hospital of Eastern Ontario.

HPI agreed to organize the event after being approached by Mohammad Ali, an artist and Sara Ali’s father.

Alaa Mustafa, 13, and Sham Alobid, 11, also painted art pieces that will be featured in the exhibition.

Mustafa said she is “excited to help, for the children to feel good.”

She made two paintings for the exhibition.  One of her paintings is of a sky with two hands together, almost like praying hands.

Alobid said she is excited to see her painting hanging at the exhibit.

Her painting has a door and stairs with two birds — she said the painting is about peace.

“Most of them are about home, about love, about peace, helping the community,” HPI president Mohd Jamal Alsharif said about the paintings.

Alsharif said the idea was born out of speaking with Syrian refugees, like Ali.

“We saw that most of the organizations that included them are concerned about the language, how to live in Ottawa, how to commute, where to do stuff.  There was not much, with children, on how to get involved with the community,” he said.

The Ottawa Chinese Community Service Centre decided to support the cause.

Almost a year ago, the OCCSC also lent support to Syrian refugees through the Services for Syrian Refugees Program, which was “a response to Canada’s commitment to help refugees settle in Ottawa,” said Hassan Ezdahmad, OCCSC’s program coordinator.

Ezdahmad said that he is very impressed with all of the paintings. “It is something very natural and very meaningful, because it’s really something they are doing from their hearts, by their hands,” he said.

“And most of it reflects big messages of appreciation to Canada and at the same time reflects something Syrian.”

Ali, Mustafa and Alobid agree what they are most excited about is to help the children at CHEO.

“They actually want to do more,” said Alsharif. “You can’t believe the inspiration they have, and when you talk to them they said it’s not enough.”

After many months of organizing, the event will start on April 1. The first day will be the VIP launch party, beginning at 6 p.m., where there will be a ceremony featuring a small dance by the children. Entrance is by invitation only.

On April 2, the exhibit will be open to the public.

Once the paintings have all sold, the organizers of the event are planning a trip to the hospital, where the Syrian children will be able to visit the children there and give them some personal gifts.