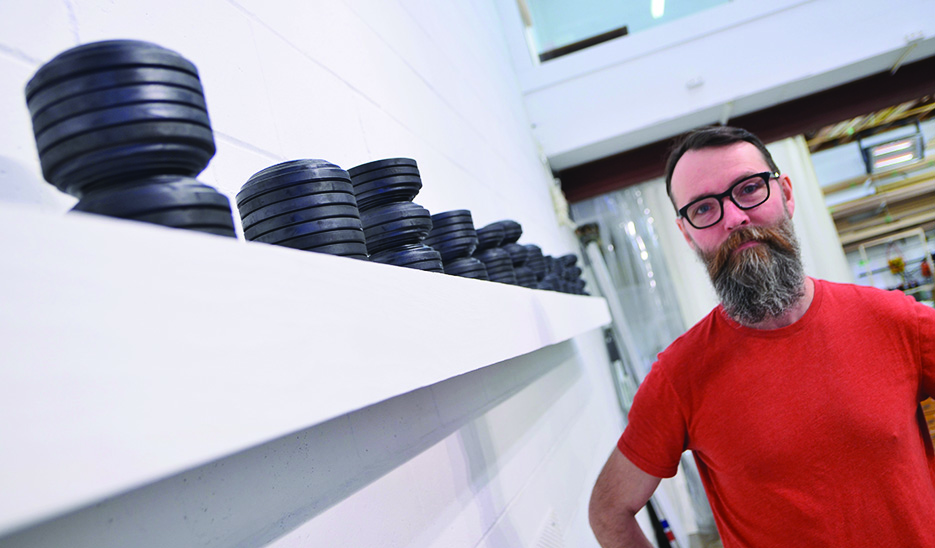 Four years ago, Danny Hussey started an art gallery in Chinatown — with the express purpose of not showing the work of local artists. Instead, he wanted to bring little-known artists from other parts of the country into Ottawa’s art scene.

Central Art Garage, which Hussey co-owns with his partner Bridget Thompson, is housed in a former mechanic’s shop just off Somerset Street West. What makes it noteworthy in the city’s close-knit gallery circuit is the owners’ taste for “conceptual art.”

Instead, they decided, they would all just think.

Thinking for its own sake is the key to both creating and interpreting conceptual art. And usually one starts with the thought: “Is this even art?”

Leonard lives in Halifax and teaches at the Nova Scotia College of Art and Design, a school famous for its conceptual art history. In the white cinderblock garage, Leonard has arranged the following items: 128 disc-shaped skeet shooting targets in 16 stacks of eight; a large fabric frame that flops around, which visitors can play with; a rectangular pile of the spongey material that’s installed under wall-to-wall carpeting; one page of sheet music covered in obscure markings; and an ambient soundtrack reminiscent of prayer bells.

Taken on their own, none of these things really look like “art.” How they relate to one another is an even greater mystery.

Hussey explains. Each part of the show is like a “breadcrumb,” he says. By following the breadcrumbs from artwork to artwork — and doing a lot of thinking along the way — we’re supposed to arrive at an “ ‘Aha!’ moment.” The fog will lift, everything becomes clear, and we will finally understand what the artist was thinking.

But standing there in the gallery space, surrounded by those figurative breadcrumbs, I’m not thinking “Aha!” I’m thinking, “Who decided this was art?” and, “What does it all mean?”

Hussey gives me more clues. The prayer-bell soundtrack is a recording of the weird-looking sheet music. And the markings on the sheet music were made by digitally scanning the spongey carpeting underpad. And each piece of the underpad has a short text on its underside, which Leonard wrote.

And the text expounds on themes of improvisation and impermanence, which, as Hussey explains, are connected to the floppy frame on the wall.

How the skeet targets fit in to all this is still beyond me (it has something to do with Zen philosophy, apparently) but I am getting the sense that all these objects are connected, even if I don’t really know how.

Hussey finances these exhibitions by making picture frames. He works in a woodshop at the back of the gallery.

An artist himself for over two decades, he’s more of a creative collaborator than your typical gallerist. Indeed, without his guidance, I wouldn’t have known what to think of Leonard’s work.

Conceptual art is catching on across the city. Ottawa’s young galleries — like Studio Sixty Six (in an apartment block in the Glebe) and PDA Projects (on Somerset Street West) — are learning to speak the form’s obscure language.

At the root of this growth are Hussey and Thompson and their Chinatown garage, breaking down the ideas for anyone who might listen.

“It’s all about the conversation,” Hussey says.  And somehow that makes sense.