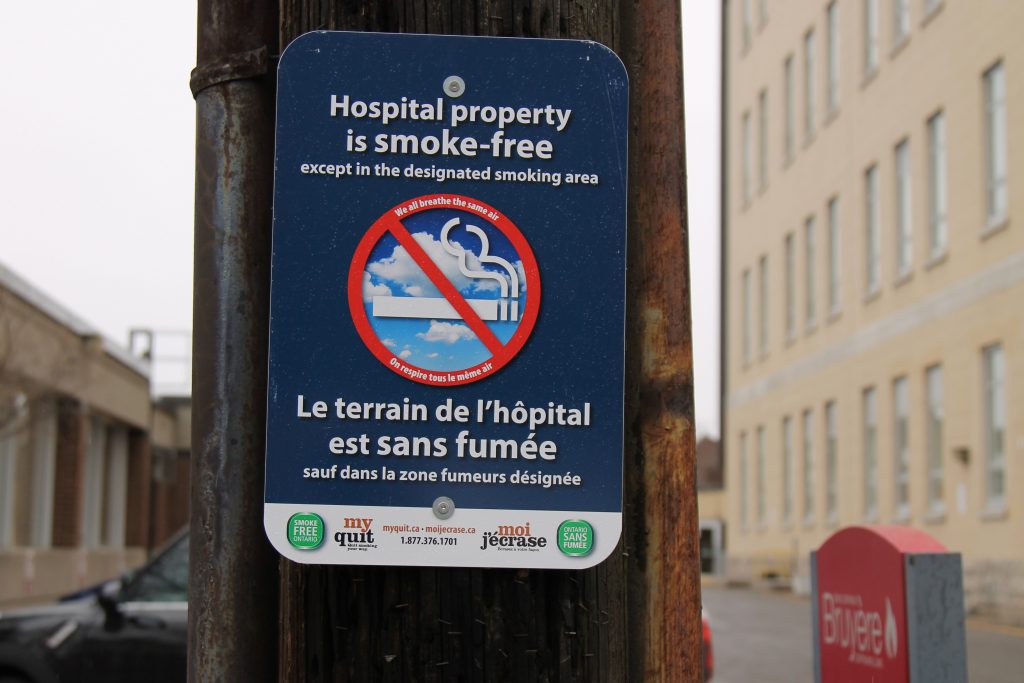 Saint-Vincent Hospital in Centretown is preparing to go smoke free on Jan. 1, 2018.

The complex care hospital, which is a part of Bruyère Continuing Care, is taking steps to comply with the Smoke Free Ontario Act by talking to its patients and putting up signage.

The Ontario government announced in 2016 that hospital grounds would become smoke free except for designated smoking areas, under the Smoke Free Ontario Act.

In following the new law, the hospital will be removing all cigarette receptacles that are currently available on the property, according to Bruyère’s director of emergency preparedness and environmental services, Christine Carrière.

Lucie Desjardins, health promotion educator at Bruyère, added that some staff members at Saint-Vincent Hospital have had difficulty respecting the rules recently. “We just have to redirect them” to the designated areas, she said, until next year when they will have to take their smoke break on the sidewalks just beyond hospital property.

As a former smoker, Desjardins said smokers all wish they could quit and “they respect, usually, their surroundings.”

“They know that this is the time to quit,” Desjardins said, “because they see that spaces for smoking are getting smaller and smaller.”

By adding more resources, people will be more likely to follow the rules, she noted.

“A lot of people wish they can quit but they don’t know where to start.”

By implementing the new restrictions, the hospital will be “getting people to reduce their smoking habits or to stop fully, which is what the government is hoping this will bring,” said Carrière.

The hospital provides patients with counseling to reduce or stop their smoking habit.

However, for those who don’t want this, “we will make sure that patients that still need to go out smoking will do so just off the property,” said Carrière.

There will always be people who support such bans and those who don’t, said Pippa Beck, Ottawa-based senior policy analyst with the Non-Smokers’ Rights Association.  “I can tell you that in other jurisdictions where it is legislated it works.”

There is a lot to consider when this kind of plan is put in place, such as making sure patients are properly attended to, said Beck.  “It is in nobody’s best interest if you have a patient in a wheelchair or hooked up to an IV trying to get off hospital property to get a cigarette,” she said.

Beck emphasized that it is important for hospitals to have appropriate measures to deal with such situations.

At Saint-Vincent Hospital, located on Cambridge Street North just west of Bronson Avenue, there are programs in place to deal with the needs of patients who smoke, said Carrière.

“Bringing patients out on outings or escorting them outside for walks around the property, whether it’s by families, visitors or volunteers that do that,” she said.

“These things are already in place and would not be a significant change in the practices that will start next year,” she added.

Other than signage, which Carrière said has been put across the entire hospital, they do reach out to their patients to inform them of new laws.

Patient representatives are assigned the task to let patients and family members know of all up coming changes, said Carrière.

Enforcement is another issue, said Krista Oswald, project officer at Ottawa Public Health, who expects that compliance with the new law will be high.

“I think the dangers of secondhand smoke are well known and this is just an opportunity to protect people,” Oswald said.

She said that anyone not complying with the rules would be fined according to provincial guidelines. “I believe in Ottawa it’s $305 for smoking in a prohibited area,” she said.

Carrière said it is everyone’s responsibility to enforce the law. “Anyone seeing somebody not respecting, can politely ask them and direct them to the area that they are allowed to smoke, if not they are subjecting themselves to what ever bylaw is around,” she said.

To help patients quit smoking, the Ottawa Heart Institute is offering hospitals at Bruyère Continuing Care, including Saint-Vincent, with a program that gives patients $450 to help them replace cigarettes, said Desjardins.  The patients who sign up are supposed to use the money to buy replacements such as nicotine patches.

“I was not expecting a big turn out,” said Desjardins, “but within a month I’ve signed 15 people.”