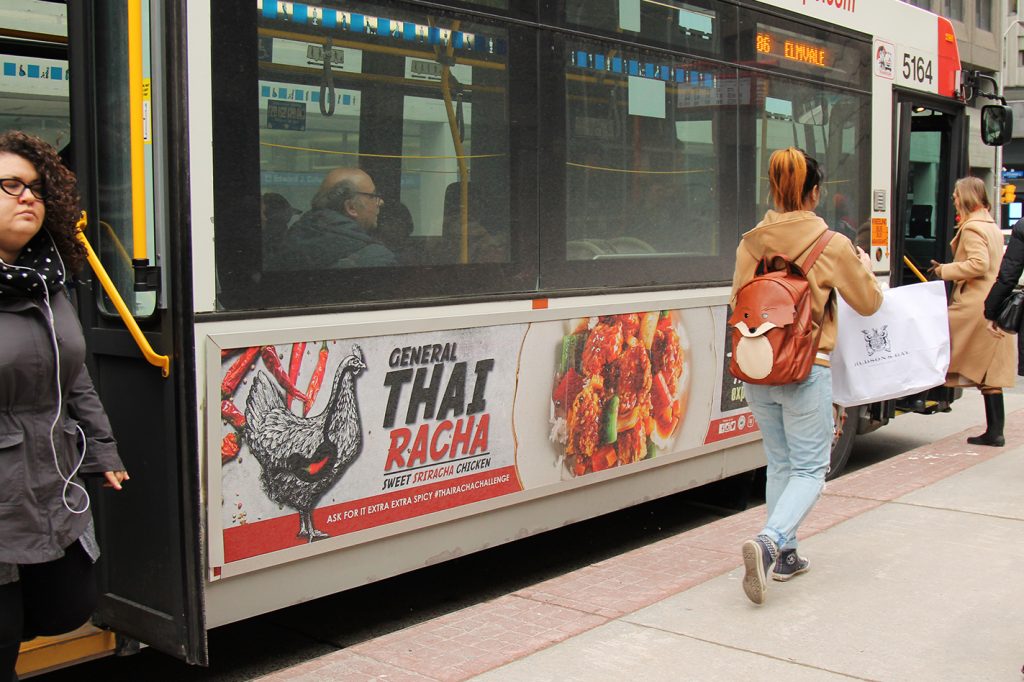 An ad for a high-calorie meal on an OC Transpo bus at the Bank and Slater bus stop. Ottawa Public Health is looking to restrict some food marketing in order to limit the visibility of unhealthy foods in the Ottawa area, part of a strategy to combat childhood obesity. Alex Mazur, Centretown News
April 11, 2017

The Ottawa Board of Health moved one step closer on April 3 to placing restrictions on the marketing of unhealthy foods to children and youth as the proposal progressed towards public consultation.

The move comes on the heels of a February report by the Heart and Stroke Foundation that outlined the series of initiatives aimed at improving the health of young people.

The foundation’s recommendations included such steps as restricting food and beverage  marketing to kids on municipal property, further educating people on the risks that unhealthy food consumption poses, and restricting the commercial marketing of unhealthy foods to youth and children.

Sonia Jean-Philippe, a registered dietitian for Ottawa Public Health, has been involved with the proposal since its inception.

“As a public health unit we follow these kinds of emerging issues throughout time,” says Jean-Philippe. “We have these recommendations from Heart and Stroke on what actions can be taken, and part of the process is to consult with the community to see what is feasible and that’s where we are.”

The consultation will be online and available to the public, which many of the speakers and councillors at the board meeting stressed is imperative.

Donald Leone, a Centretown resident and Carleton University student who has struggled with an eating disorder in his past, is planning on putting in his two cents and he hopes they will take his opinion seriously.

“A lot of these initiatives and ideas usually spawn out of the goal to lower our country’s obesity rate,” says Leone, “and that’s a good cause. But they always fail to articulate that the focus should be on the general health and well-being of the person and not focus as much on their weight, which actually isn’t as important.”

“Educate not regulate” was a common theme articulated by city councillors Michael Qaqish and Mark Taylor, but they both conceded that healthy living education has not been entirely effective.

Jean-Philippe agrees that part of the issue is educating people. “But there’s also another part, which is providing an environment which is supportive of kids who want to pursue a healthy life.”

“But there’s also another part, which is providing an environment which is supportive of kids who want to pursue a healthy life,” said Jean-Philippe.

Jean-Philippe also said that the February report by the Heart and Stroke Foundation, titled “The Kids Are Not Alright,” outlined data that illustrates the need for the proposal from Ottawa Public Health.

Many speakers presented their cases to the board throughout the April 3 meeting and all expressed support for the restrictions.

Annick Buchholz, a clinical psychologist at CHEO and one of a few who had the opportunity to speak at the meeting, said the proposal could have a definite impact in children’s livelihoods.

“In our minds, it was a no-brainer in terms of any type of marketing directed towards children,” says Buchholz.

“Parents do say that it is harder and harder to work with all these strong societal influences, not just on their children but on themselves as well.”

The public consultation will be online soon and will run from April to June.

The report submitted to the city stated: “Research demonstrates that marketing and easy access to unhealthy foods high in fat, sugar, salt and calories, and sugar-sweetened beverages have contributed to rising caloric intake in many populations. Children and youth are developing lifelong health habits in an environment where direct and indirect marketing of food and beverages is increasingly prevalent. The evidence shows that unhealthy food marketing is an important and independent causal factor in… childhood obesity.”