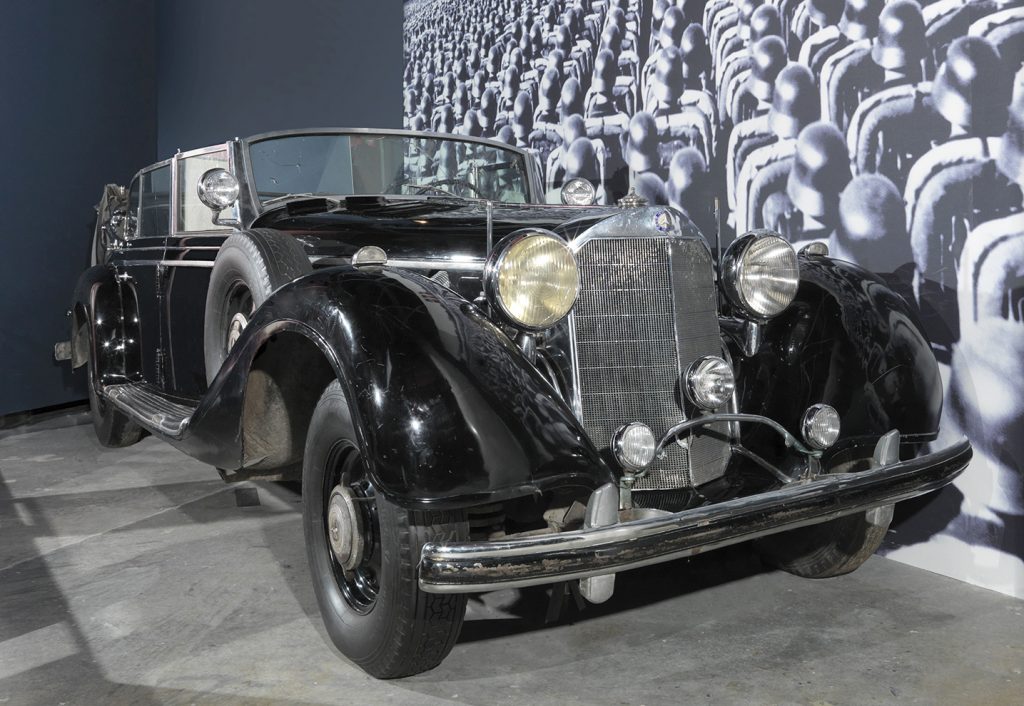 Once part of a fleet of vehicles used by Adolf Hitler and other high-ranking Nazi officials during the Second World War, the black Mercedes-Benz 770 would become a post-war symbol of the terrifying pageantry of the Nazi regime.

Later, it remarkably became a prized artifact at the Canadian War Museum.

Now, a new book about Hitler’s car has unravelled the history of the 80-year-old limousine, as well as a second, nearly identical Mercedes-Benz that also found its way to North America in the years that followed the defeat and destruction of the Third Reich.

That second vehicle was widely toured around the United States, where visitors flocked to see the car said to have been personally used by Hitler.

The other quietly made its way to Canada.

It spent many years in storage before being acquired by the Canadian War Museum in 1970, when it occupied a building on Sussex Drive.

After a controversy in 2000, during which the military heritage hub contemplated disposing of the limousine because of its association with one of the darkest chapters in modern history, the car that actually carried the Fuehrer to meetings and rallies across wartime Germany was put on display at the museum’s new LeBreton Flats location.

American writer Robert Klara is the author of The Devil’s Mercedes: The Bizarre and Disturbing Adventures of Hitler’s Limousine in America.

The book explores how both cars crossed the Atlantic Ocean, and the impact they had on the people who saw them.

“The whole theme here is that when people looked at these cars, they really weren’t just looking at cars,” Klara said in an interview. “They were looking at incredibly powerful symbols, both of a war and frankly of the man who started the war. And, as such, the cars became proxies for Hitler.”

Initially, Klara said he was interested in writing about a “cursed” object with a dark past.

During his search, he started to wonder what had happened to the car Hitler had been driving in. It turns out there were many such vehicles.

“I was interested in cars that had come to North America,” he said. “That’s a very unique proposition because World War II was a war that was not solely, but largely conducted on continents other than our own. So we didn’t have much immediate evidence of the conflict on our shores.”

According to Jeff Noakes, a historian at the museum, the car on display in Ottawa was initially believed to have belonged to Hermann Göring, the head of the Luftwaffe, Germany’s air force.

Its link to Hitler was only exposed through the diligent work of Ludwig Koshe, a former librarian at the museum who spent years digging into the car’s history.

Koshe found that the car was ordered and delivered for Hitler’s use in the summer of 1940, and was used for various parades and processions until about 1943.

Near the end of the war in Europe in 1945, a U.S. Army sergeant found the car sitting on a flatbed railway car in Austria. After a short firefight with German soldiers, he secured the car and drove off with it.

The car was then shipped to the U.S., where it was eventually put into storage. In the mid-1950s, a car collector from Toronto bought the car, and drove it around for a few years before selling it to a Montreal-based collector, who eventually offered it to the Canadian War Museum.

But, the car has not been without controversy. In 2000, Jack Granatstein, then-director of the museum, proposed putting the car up for auction in order to raise money to help build what became the museum’s new Centretown location.

According to reports at the time, Granatstein’s reasoning was that “displaying the car gave the wrong image and glamourized Nazism.” The decision was eventually abandoned after emails and calls from members of the public, who wanted the evocative artifact kept by the museum.

“I don’t think that censorship of that stripe ultimately benefits anybody,” said Klara, in reference to the controversy. “The question is, when you have a very challenging artifact, how do you display it in a way that will be instructive and yet sensitive, that will constitute a public benefit? That will achieve a measure of public education and not glorify the things that are rightfully condemned about a regime like Hitler’s?”

Despite all of its armored glass and reinforced plating, the car is also a convertible. Although this may run counter to security concerns, it was a design choice to maximize the limousine’s use as an instrument of propaganda.

These include a seat cushion on the front passenger side which could be flipped over to become a platform, as well as a handle on the back of the windshield to hold on to.

Given this history, the car is a difficult artifact to display, Noakes said.

Story produced in collaboration with artsfile.ca