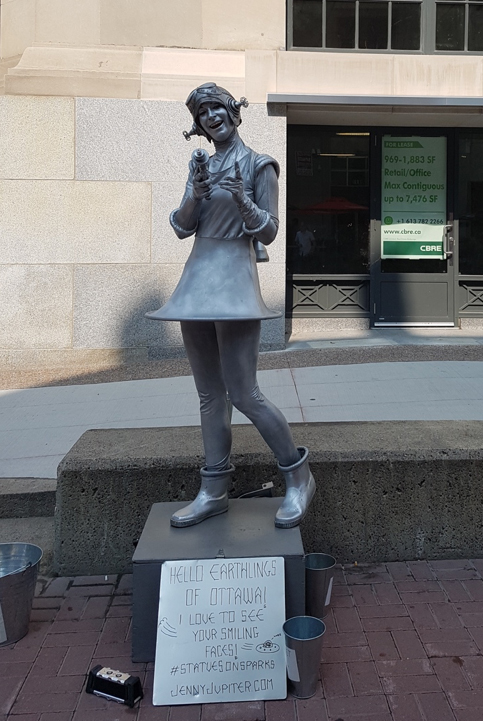 Elvis, Marie Antoinette and other “living statue” performers were miming all over Sparks Street on the weekend of Sept. 16−17. Aidan Chamandy, Centretown News
September 26, 2017

Elvis, Marie Antoinette and other “living statue” performers were miming all over Sparks Street on the weekend of Sept. 16−17 to celebrate the 50th anniversary of the Centretown retail district’s designation as the first pedestrian−only promenade in Canada.

The event began with Mayor Jim Watson, Somerset Coun. Catherine McKenney and members of the Sparks Street BIA announcing they had launched a joint review, seeking to reinvigorate public interest and breathe life back into the once-vibrant mall.

“We want to make it more people friendly, get more attractions, animation and entertainment down here,” said Watson.

He said he was keen on the potential to transform Sparks Street, pointing out how developments already underway — including the LRT system and a new condo and hotel under construction at Queen and Bay — would bring increased traffic and commerce to Sparks.

The tone of the event was upbeat, with attendees enjoying the weather, live music and performances by costume−clad “living statues” engaging in motionless mimicry.

“Ottawa is unique. We’re simultaneously one of the coldest and hottest capital cities in the world. Whatever we do, we have to make it so people can use Sparks Street 12 months of the year,” he said. “Summer is easy: flowers, performers, music. But what do you do in the winter? We have to create those spaces so people don’t think of it as a cold place they just come back to in May.”

McHale stressed his belief that the key to an effective and lasting revitalization of Sparks Street would be striking a better balance between the various types of business that occupy the promenade.

Sparks Street’s restaurants and bars attract a fairly steady flow of customers. But McHale wants an increased retail presence to balance these offerings and give people more reasons to stay and spend on the street.

Sparks Street has been through peaks and valleys since the decision to close the street to cars. At the outset it was boon for business and continued into the 1970s, but as the population grew and Ottawa residents migrated farther into suburbia, Sparks Street faded as a commercial and cultural hub.

David Levesque, an Ottawa resident who was perusing the promenade, said he has many fond memories of time spent on Sparks during its heyday.

“My grandfather worked around here with the Air Force and my mom used to work down here, so I’d come and visit her and we’d have lunch together,” he said. “It was so nice just walking up and down, going to shops, going to Parliament Hill.”