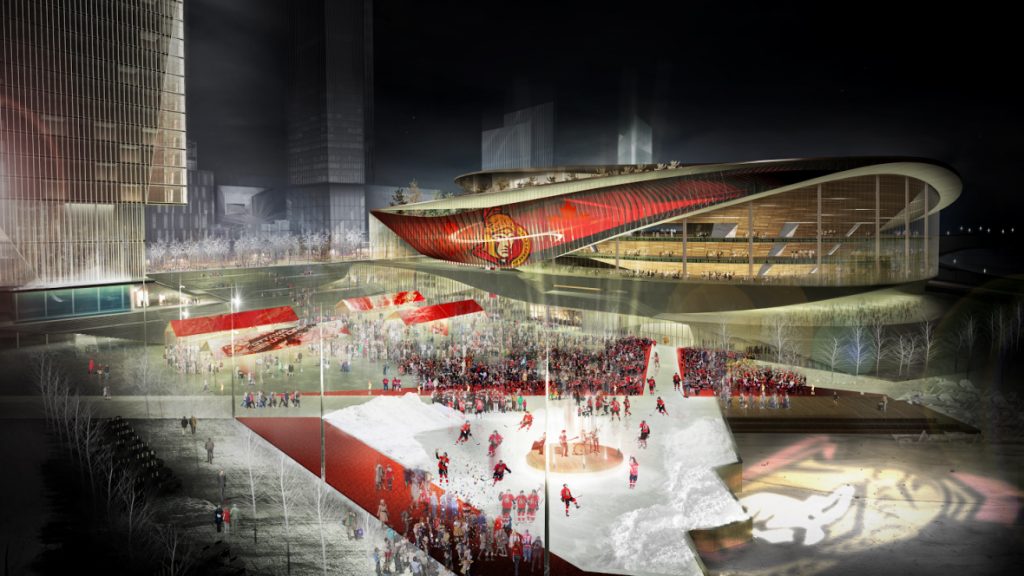 The Senators' proposal for an arena and surrounding district mirrors a similar development in Edmonton. Courtesy, Senators Sports & Entertainment
September 28, 2017

As planning continues for the Ottawa Senators’ proposed new arena in the heart of LeBreton Flats, owner Eugene Melnyk and Co. must look to the example of the Ottawa Sports & Entertainment Group and build not just a venue, but a district at their new location.

The Canadian Tire Centre, the NHL team’s current home in Kanata, is everything the club’s future location ought not to be: a concrete-heavy, stand-alone venue with few other entertainment options in the surrounding area, and far from the city centre.

During the 20 years since its construction, the building and organization have had something of a tumultuous existence. There have been sharp attendance drops, an early-2000s ownership crisis and the team’s ongoing struggle to embed itself in Ottawa’s geographic identity.

When the Senators relocate to Centretown, they will need to ensure they create an environment that has staying power; Melnyk’s group must work to build, as OSEG has done at Lansdowne, an experience that lasts beyond three hours on game day.

With its restaurants, gym facilities and movie theatres, OSEG’s Lansdowne complex has revitalized the surrounding neighbourhood and made Bank Street trendy amongst both the city’s upper crust — seen often in VIP boxes at Redblacks football games — and the younger crowd.

The Senators could do the same with LeBreton Flats — if they’re willing to copy OSEG’s formula and all stakeholders involved at the site permit it to happen.

As it stands, the contrast between the Sens’ and Redblacks’ venues is remarkable.

At Lansdowne, games are an event with a mind-boggling number of pre- and post-game options for fans: banks, stores and restaurants all sit within a minute’s walk of one of the stadium’s entrance gates.

In Kanata, the CTC is a 2.1-kilometre stretch from the nearest main artery — Terry Fox Drive — and restaurants within reasonable walking distance on a cold February night are scarce.

At Lansdowne, the nine Redblacks home games have a festival-like atmosphere; fans are engaged with the product on the field, and the party continues well after the final whistle within the mini entertainment district adjacent to the stadium.

In contrast, the CTC has come to be called “The Library” by visiting media; quiet and quaint, it’s the kind of venue to which people commute, then watch the game and leave straight after. The area has no pull beyond three hours, two or three times a week.

While it may be difficult for the Senators to swallow their pride and copy their cross-town rivals — Melnyk was initially chilly to the idea of hosting the Sens’ outdoor classic game at OSEG’s Lansdowne venue — it is a must.

If you build it, they will come. But as evidenced by OSEG, whose Redblacks have enjoyed good attendance during an era now trending towards three losing seasons in four years, they will stay if you offer a product that isn’t solely dependent on the performance of your major tenant.