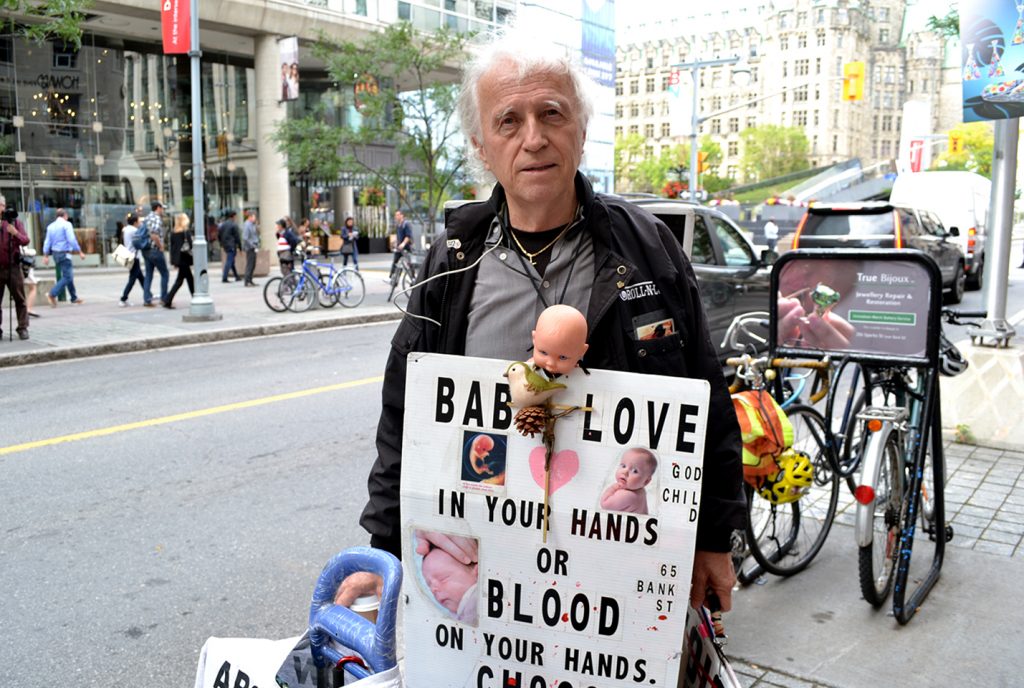 Cyril Winter protests outside the Morgentaler abortion clinic on 65 Bank St. on Oct. 5. Protests came after Attorney General Yasir Naqvi announced that there is soon going to be a ban against protesters picketing near clinics that perform abortions. Alana Thoman, Centretown News
October 10, 2017

The Ontario government has introduced legislation to create safe zones around abortion clinics, a measure designed to keep anti-abortion protesters at bay.

“Women in our province should be able to access health care, free from the threat or fear of violence or harassment,” said Indira Naidoo-Harris, Ontario’s Minister of the Status of Women, in a statement.

Verbal harassment and intimidation are ongoing issues near Ontario’s eight abortion clinics, including Ottawa’s own Morgantaler Clinic near the intersection of Bank and Queen streets.

Anti-abortion protesters are regularly stationed outside, often hoisting signs depicting graphic images in an attempt to dissuade visitors from obtaining services inside. According to news reports earlier this year, protesters have spat on clients entering the Ottawa clinic and routinely violate a city bylaw that stipulates demonstrators must remain on the far side of the street.

In response to complaints about the situation, Somerset Coun. Catherine McKenney and Ottawa Mayor Jim Watson pressed the Ontario government for stronger measures to curb aggressive behaviour near the clinics.

“While I strongly support everyone’s fundamental right to freedom of expression, our laws must balance that right with keeping people safe,” Naqvi stated following the introduction of the new legislation. “Our government is standing up for every woman’s right to choose, and protecting the safety of abortion service providers.”

Once the Safe Access to Abortion Services Act passes, anti-abortion protesting will be banned within a 50-metre radius of Ontario’s eight abortion clinics. That’s the length of an Olympic swimming pool, in every direction.

The legislation will also create 150-metre radius safe zones around the homes of staff and health professionals who provide abortion services. Harassing these employees on matters regarding their work will be prohibited at all times, regardless of location.

For first offenders, infringing the proposed law could mean up to $5,000 in fines and six months in jail, with consequences potentially doubling for repeat offenders.

Several sexual health and women rights organizations, such as Planned Parenthood Toronto, issued statements voicing their support for the legislation.