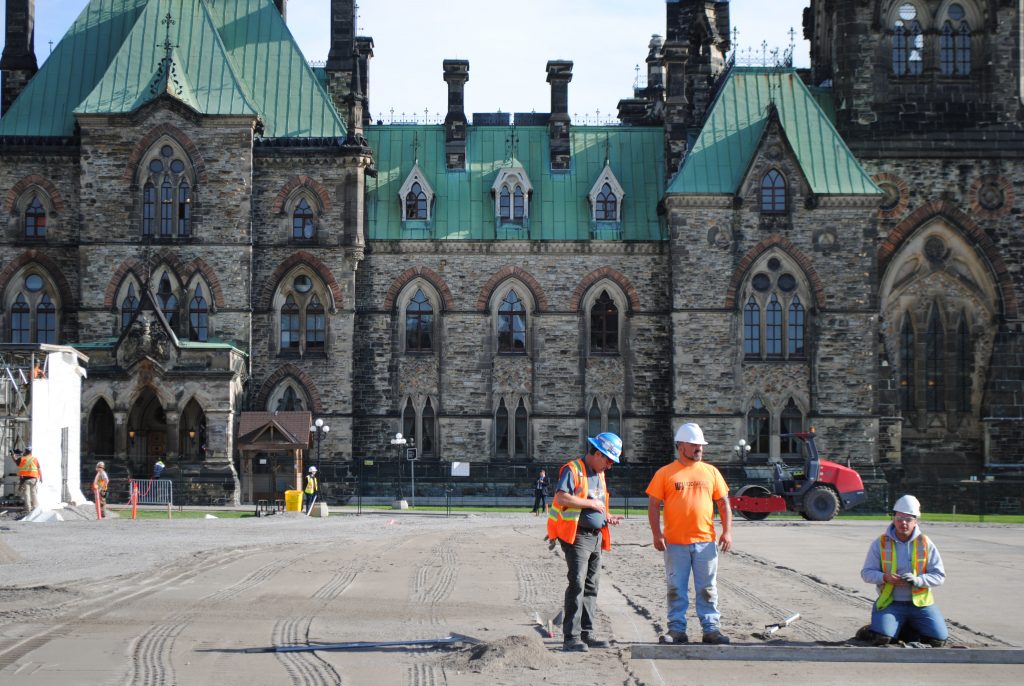 Construction began in mid-October on the Parliament Hill refrigerated skating rink, which will be open to the public from Dec. 7-31 as a grand finalé to the Canada 150 celebrations in the capital. Max Nease, Centretown News
October 29, 2017

December will be a big month for hockey in Ottawa, and final preparations are well under way.

The federal Department of Canadian Heritage is partnering with the Ottawa Senators and the Ottawa International Hockey Festival to build the first-ever skating rink on Parliament Hill.

The outdoor arena will be open to the public from Dec. 7-31, hosting various activities — including public skating and hockey, perhaps even an Ottawa Senators practice.

A construction company broke ground Oct. 12, blocking off the entire East Lawn to make room for the full NHL-sized, refrigerated rink to be surrounded by seating for 1,000 spectators.

The department says the full cost of the rink will only be made available to the public after events conclude.

“Canadians will experience true winter magic during the illumination ceremony of Christmas Lights Across Canada on December 7,” according to a statement from Canadian Heritage.

According to the statement, the rink will then “serve as the focal point for Canada 150 Skating Day on December 10, which will also include events in 200 community arenas from coast to coast to coast.” The ice surface will also be used by some teams competing in the Bell Capital Cup, an Ottawa youth hockey tournament.

“We certainly know for a fact that there will be a lot of public family skates and there will be other special announcements made in the weeks ahead,” said Ottawa Mayor Jim Watson.

Other potential ideas on the table include an Ottawa Senators practice as well as a Senators alumni game, but Watson said it will be up to Canadian Heritage to finalize plans and make announcements.

The initiative will also be a fitting send-off for the year-long Canada 150 celebrations, as the rink will be a part of the annual Parliament Hill New Year’s Eve party.

“Most people in Ottawa are going to want a chance to skate with the Peace Tower in the background because it’s never been done before,” said Watson.

The project is expected to increase tourist traffic to the capital in December.

“I think once people have seen those first images of people skating on Parliament Hill, it’ll positively affect our tourism industry,” said Watson. “It will get people booking hotels and wanting to come here during that time.”

The last large-scale Parliament Hill event caused many complaints due to disorganization, when people spent their Canada Day waiting in boiling hot, over-crowded lineups to get onto the Hill.

“We’ll plan with the police and public works and our traffic division to ensure that people have good access to the Hill and that we don’t repeat some of the real challenges that took place on July 1 with the lineups that were just horrendous,” said Watson.

The NHL originally made a bid to have the Senators play the Montreal Canadiens on the Hill for a classic outdoor hockey match marking the 100th anniversary of the first National Hockey League games in December 1917. That idea fell through last November.

The outdoor NHL game will instead take place on Dec. 16 at TD Place at Lansdowne Park, just three weeks after the same stadium hosts the CFL Grey Cup.

“We worked very hard to try to make (the NHL game) work on the Hill because we thought that would’ve been an iconic shot to see the Canadiens and the Senators replay that game from 100 years ago,” said Watson.

Watson said it turned out the game couldn’t have taken place in front of the Peace Tower due to security and logistical concerns, such as the rules that prohibit the sale of alcohol, advertising and entry fees on the Hill, making the public rink now under construction a good small-scale alternative.

The operation of the Parliament Hill rink follows the unveiling of the new Stanley Cup monument on Sparks Street, which was unveiled on Oct. 28 — a $2.8-million project marking Ottawa as the birthplace of hockey’s holy grail.

“We couldn’t have picked a better time to celebrate the sesquicentennial and hockey, because all these dates lineup with the key milestones of the history of hockey in our city,” said Watson. “The stars have really aligned for 2017.”