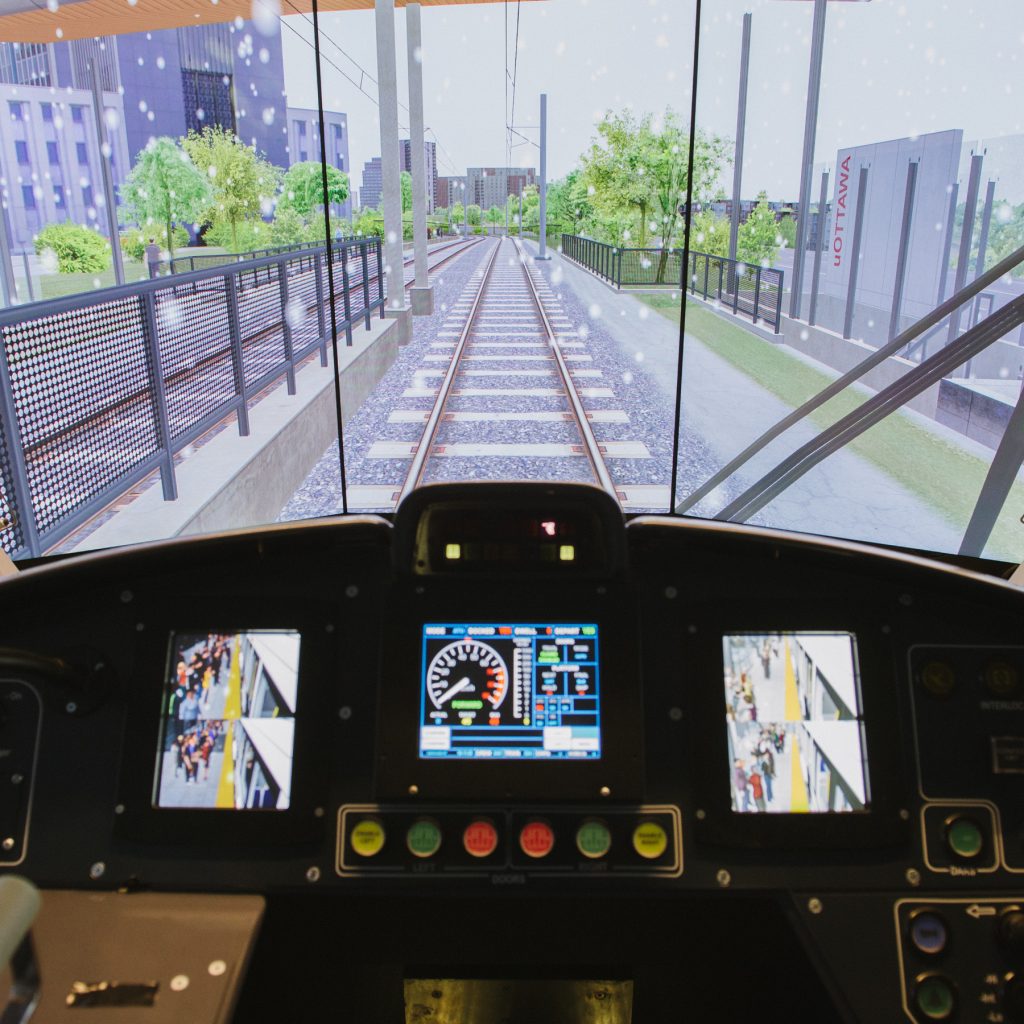 A view of a stretch of the LRT as seen from a new simulator. Courtesy OC Transpo
October 29, 2017

OC Transpo has launched a $2.7-million interactive simulator facility to improve the training of bus and light-rail transit operators, including those who will control trains serving the new LRT Confederation Line.

The facility will include three mock-up simulation stations for LRT and bus drivers, and one desk-top based simulation program.

A press release from City of Ottawa stated that the “real-life situations” that the devices will simulate for operators include “varying weather conditions, station overcrowding and unexpected objects on the track.”

The simulators cover the entire routes of both the east-west Confederation Line — expected to open next spring — and the already-operating north-south Trillium Line, with local landmarks and varying weather conditions embedded in the animation, according to Hopkins.

The bus simulator replicates approximately 25 kilometres of roadway, including Wellington Street, Rideau Street and the Transitway.

Chris Herdman, director of the Visualization and Simulation Centre at Carleton University, explained that simulation training is crucial for helping train operators prepare for daily challenges, as well as rare emergencies.

“You can introduce variance to what trainees experience,” he said. “Some type of unexpected emergency that could happen, but you couldn’t practise in the real train. You can introduce things that they would probably never face in their career — if they did, at least they have had some exposure to it.”

Herdman said the simulation facility must accommodate trainees of all levels with a system that can gradually introduce learning objectives.

“If you want a simulator that does basic procedural things, like button or instrument works, it could be a desktop simulator. If you want to train people on the dynamic changing situations where it’s more real, then you have a simulator that is more fledged out with higher fidelity.”

The City of Ottawa contracted with OKTAL, a company based in France that develops transportation simulations, to produce the virtual models of train and bus routes. OKTAL has worked with Calgary and Montreal to provide similar services.

Herdman said that OKTAL is a very well-known company in the field of simulation technology. He added that although the price of the technology seems expensive, it is comparable to industry standards. An aviation simulation station usually costs tens of millions of dollars.

“The price ranges reflect the fidelity and the extensiveness of the simulation. It can still be costly because they have to be accurate, certified and properly done,” said Herdman.

He also added that the simulation facility is a cost-effective way to train operators on practical knowledge.

“There aren’t many empty tracks sitting around where people can just go up and practise training. It’s a lot cheaper than to buy and maintain tracks and extra railway cars,” said Herdman.