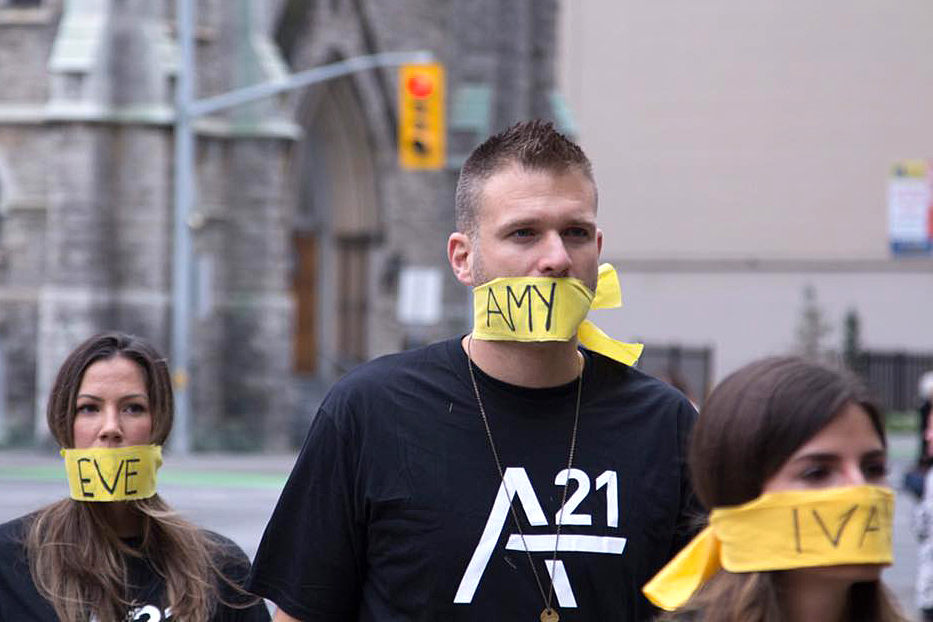 The international non-profit organization A21 (abolitionists of the 21st century) recently partnered with My Church in Ottawa to host the Walk For Freedom, a silent protest aimed at raising awareness of human trafficking and modern slavery.

More than 300 people marched single file from Jack Purcell Park to Parliament Hill on Oct. 14 for the fourth annual Walk For Freedom. With help from Ottawa-based advocates against human trafficking, the event focused on local issues related to sex trafficking, resource availability for victims and public education.

“Our goal today is to teach people that human trafficking doesn’t just happen in other countries. This is something that happens on our streets and in our city,” said Michelle Morgan, a coordinator of the walk.

Sex trafficking, defined as forcing, deceiving, or coercing a person to perform a commercial sex act, is Ottawa’s most common form of modern slavery.

According to a study by the Ottawa Police, the city’s human trafficking industry generates more than $26 million a year. The study also states that 90 percent of those trafficked in Ottawa are Canadian citizens.

In 2014 alone, PACT Ottawa (Persons Against the Crime of Trafficking in Humans) identified and documented 140 cases of local sex trafficking. During a speech at the event, PACT Ottawa representative Terrilee Kelford said that number profoundly underestimates the scale of the problem.

This year, 50 countries participated in the Walk For Freedom, hosting some 300 separate protests around the world.

Protesters wore black to represent grief and solidarity with victims and survivors as well as yellow bandanas over their mouths. The yellow bandanas featured the names of three human trafficking survivor case studies outlined on A21’s website — Ivan, Amy, and Eve.

“By physically wearing survivors’ names, it personalizes statistics,” said Caleb Davidson, the event facilitator and pastor for My Church. “Eve was three years old when she was sold off to sex traffickers in Thailand. She was addicted to drugs, forced to dance for eight hours a day, and raped by grown men… That is more powerful than any number.”

Ontario is a hub for human trafficking in Canada, with Highway 401 historically acting as a major transportation route for traffickers and modern slaves.

Sherry Lacey, an employee with the Ottawa Coalition to End Human Trafficking, highlighted vulnerable populations and their relationship with human trafficking.

In Ottawa, the majority of victims are youth between the ages of 12 and 25, with 16 being the typical recruitment age.

Recruitment by traffickers is often a lengthy process that can include blackmail, forced dependency and victim “grooming” — the psychological manipulation of a victim over a prolonged period of time.

Traffickers often look for factors when recruiting, such as marginalization based on race, gender, homelessness, substance abuse and addiction, historical abuse and trauma, and sexual orientation, said Lacey.

The key to effective human trafficking prevention and policy is an engaged network of resources, said Kelford.

Resources in Ottawa, including PACT, OCEHT, and the human trafficking unit of the Ottawa Police, are working together to educate the public, offer support systems to survivors, and prosecute traffickers.