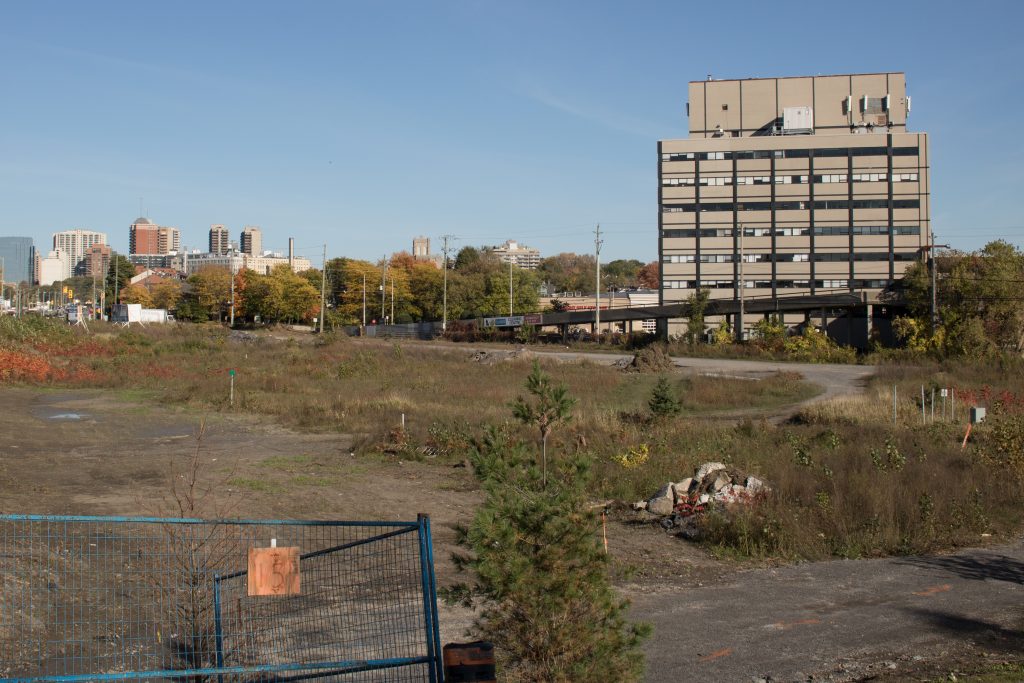 Between the City Centre and the O-Train tracks on the south side of LeBreton Flats, developers plan to break ground soon on a new three-tower complex. The project headed by Trinity Development Group has received significant financial concessions from the city. Michael MacKinnon, Centretown News
October 30, 2017

The planned redevelopment of 900 Albert St. is one step closer to completion with city council’s controversial decision to grant the project partners major financial concessions and approval to begin work on the land.

At its Oct. 11 meeting, council approved giving an $8.25-million Brownfields Rehabilitation Grant to the developers to begin cleaning the contaminated property near Bayview Station. Additionally, council agreed to waive a $920,000 fee that would normally have to be paid to move city pipes off the land, instead charging only $1.

That decision, however, was not unanimous. Somerset Coun. Catherine McKenney voted against waiving the fee because she said it would be better to wait and see what the developer proposes to do with the property, a wedge of tree- and shrub-covered land located in the northwest corner of McKenney’s ward between the City Centre complex and the O-Train tracks.

“We don’t know that the application is actually going to contribute to the public realm and actually be good urban planning, because we haven’t seen it yet,” said McKenney.

McKenney said she thought the rationale of giving up nearly $1 million without knowing the finalized proposal was “flawed”.

“If in fact this development does become a benefit to the entire community, that is when we should be talking about waiving any fees,” McKenney argued.

Although Trinity Development Group, InterRent and PBC Real Estate Advisors have a plan for three residential highrises ranging from 50 to 59 storeys high, along with retail space, they are still working on finalizing their building plans with the city.

One of the most important issues for McKenney is the south side of the proposed redevelopment.

“For me, having that south side animated, not having the podium be essentially dead space and just a wall is vital,” she said.

Mathew Laing, vice-president of development and planning with Trinity Development Group, said these are concerns he has heard from McKenney and something the three partners are reviewing.

“We are continuing to explore various design options for the south wall,” Laing said.

He said with city approval to begin work on the land, the developers are busy coming up with the best possible plan.

“We are looking at the redevelopment as a whole now,” Laing said.

It’s a redevelopment Laing said he is happy to move forward as Ottawa’s only development that close to the intersection of the north-south Trillium Line and east-west Confederation Line of light-rail transit system, to be fully operational next year.

The 900 Albert St. project has been described by the proponents as a “transformational” development for the city because of its proximity to the LRT and its tremendous scale.

“We think that this is a significant benefit for the city and we are excited to move this thing forward,” he said.

The decision by council was supported by Richard Hayter, director of community relations at the Ottawa- area Building Construction Trades Council.

Representing about 35,000 Ottawa residents who work in the construction industry, he said this development will create jobs.

“(It’s a) hub location between the Trillium and Confederation Lines that will provide almost eight million hours of construction work,” Hayter said.

Hayter said he applauds the redevelopment and council’s approval of waiving fees to close the gap between now and construction beginning at LeBreton Flats.

“We are concerned if this building doesn’t get going we have people out of work,” Hayter said.