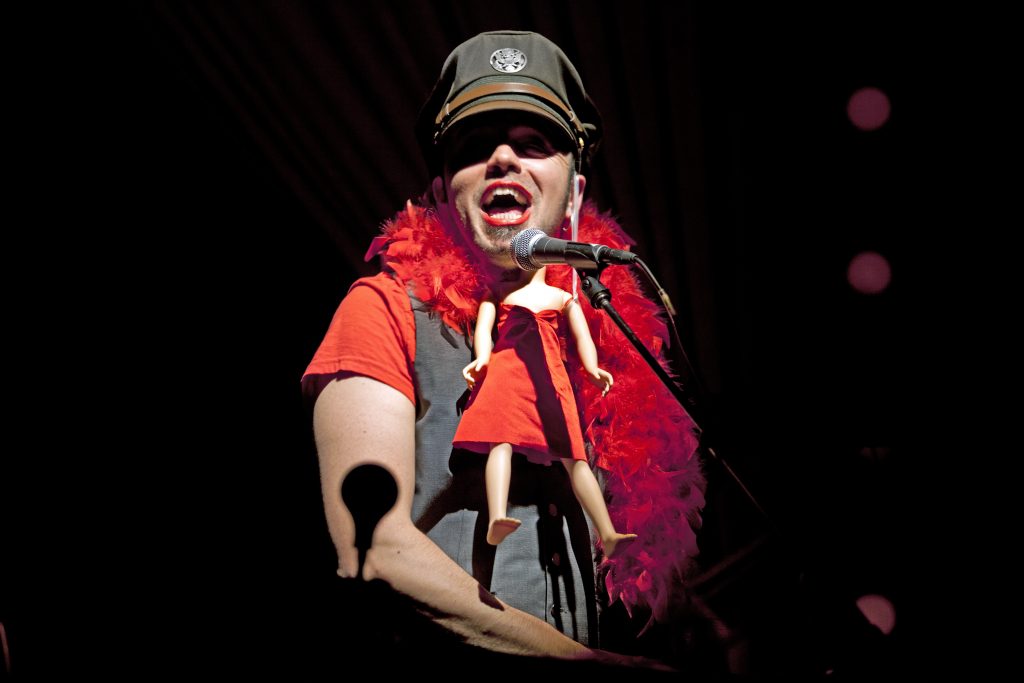 The God that Comes was one of the productions performed at the National Arts Centre during the 2013 Magnetic North festival. Courtesy of Trudie Lee.
November 14, 2017

With a new board of directors in place, supporters of the Magnetic North Theatre Festival are looking to resurrect it after last year’s cancellation. But there’s no word yet on whether the revived festival would have any footing in Ottawa.

Magnetic North, Canada’s only national theatre festival, used Ottawa as its home-base during its previous run. The festival took place in the city every second year, alternating with various other Canadian cities.

Magnetic North cancelled its 2017 season after directors had faced financial trouble for a number of seasons. According to a statement made in March by the chair of the Canadian Theatre Festival Society, Mike Hawkes, Magnetic North had an accumulated deficit that had been reduced by half over the previous five years, but still stood at more than $200,000.

“The continued pressure of an accumulated deficit,” the statement said, “makes the festival untenable.”

According to the board’s chair, Vancouver arts leader Heather Redfern, the new board of directors urged the previous executive team not to declare bankruptcy despite the financial burdens. Redfern wanted time to figure out a new plan for the festival.

Although Ottawa was previously the festival’s home base, Redfern said it’s too early in the process to determine if the festival will still call Ottawa home.

“Ottawa has been amazing to the community, but in a big city it’s hard to distinguish from the crowd,” Redfern said. “We’re keeping open to every option.”

Magnetic North was envisioned in 2001 by a number of Canadian theatre professionals, including Marti Maraden, the former artistic director of English theatre at the National Arts Centre.

Two years later, Magnetic North premiered in Ottawa. The first season, as well as the following 13 editions of the festival, were co-presented by the NAC.

Nathan Medd, managing director of the NAC’s English Theatre, said the festival “jumpstarted a culture of theatrical touring in Canada,” and has provided great opportunities for emerging artists.

Medd also said that, “as one of the largest cities in Canada, there is still a lot of room for Ottawa’s theatre industry to grow.”

According to Eric Coates, artistic director of the Great Canadian Theatre Company, Ottawa has a thriving arts scene even without Magnetic North.

But having participated in the 2015 festival, Coates said he appreciated the opportunity to partner with another organization. However, the GCTC would’ve been producing the same show even if it had not been involved with the festival, he said.

“It’s incredibly important for communities not served by a large institution,” Coates said of Magnetic North, “but Ottawa probably won’t notice the absence.”

The 2016 season of Magnetic North was presented in the Yukon. Coates used this as an example of a community that benefitted greatly from hosting a major festival.

Magnetic North presented 11 shows in Whitehorse during the 10-day festival. Six of the shows sold out completely, according to a news release from the Government of Yukon.

Among those sold out shows was a production by Whitehorse’s Nakai Theatre. Landline invited audience members to go on a walking tour of their city, while listening to a provided audio track. The participants heard prompts through a set of headphones that encouraged them to explore Whitehorse.

Over 5,000 kilometres away, in Ottawa, strangers were listening to the same audio track at the same time. Participants in Whitehorse and Ottawa were paired up, and texted each other throughout the journey through their respective cities.

This immersive and collaborative production connected people from opposite sides of the nation, and displayed diversity in Magnetic North’s programming, organizers said at the time.

Redfern and her fellow board members, who come from a variety of different theatre communities across the country, are holding meetings to decide the future of the festival. The first meeting was held Nov. 7, with further ones planned for Toronto and Ottawa later this month.

Magnetic North is working towards an event in 2019. The amount of funding that becomes available, she said, will help shape what kind of event it will be.