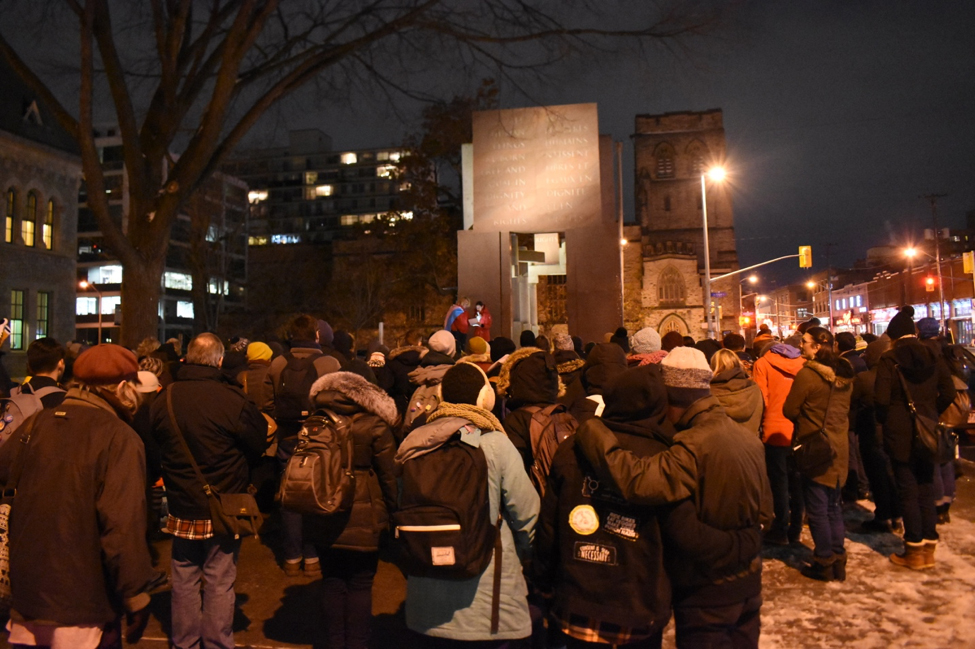 A crowd of trans people and allies huddle for warmth and support in front of the Canadian Tribute to Human Rights, where vigil organizer Lyra Evans speaks with the help of a vigil attendee. Julia Moran, Centretown News.
November 28, 2017

About 200 trans people and allies gathered in front of the Canadian Tribute to Human Rights on Elgin Street recently, holding candles and white roses as part of Ottawa’s main event for Trans Remembrance Day.

On the cold, snowy evening of Nov. 20, participants huddled for warmth as they held a vigil to honour trans people all around the world who have lost their lives to transphobic violence.

Trans people are those who do not identify with the sex they were assigned at birth. The word trans encompasses many intersecting notions of sex and gender. While some trans people medically transition to male or female, others identify as neither, and straddle the lines of gender identity and expression.

Rivard said trans people are especially vulnerable to violence. “The sad reason a vigil is needed is that trans people, and in particular trans women of colour, are murdered for the simple fact that transphobia is rampant and we are seen as disposable,” she said.

Trans people in Ontario are not exceptions. According to the TRANS Pulse Project, a group that surveyed trans Ontarians, 34 per cent of respondents reported being verbally threatened or harassed for being trans. Thirty-two per cent moved away from their homes because of safety concerns, and 57 per cent avoided using public washrooms for the same reason.

Johnstone, queer youth activist and organizer, says transphobia is deeply entrenched in society. “The rates of murder and physical violence that lead to loss of lives for trans folks are terrifyingly high. The vigil is very much to memorialize those lives lost and to mourn the effects that transphobia is still having on folks,” she said.

The vigil began with the introduction of three trans women speakers. One was Alyssa Gonzalez, who read an original poem titled Today, We are Candles.

Candles in the crowds’ hands dimly illuminated Gonzalez’s face as she spoke of resilience: “Today, we bring this flicker of warm hope into the darkness where we live our secret days, and counter their hateful fire with a star scape of succor and remembrance. Today, we are candles.”

After the speeches, organizer Lyra Evans read a list of the names of over 350 trans people from all over the world, all of whom have died in the last year due to suicide or transphobic violence. Many were stabbed or shot; some were stoned to death.

It was not a complete list, as a lot of trans deaths go unreported. Johnstone said the number of trans deaths is likely much higher because a lack of acknowledgement of trans identities leads to a deficiency in accurate statistics.

There was silence from the crowd, then some muffled tears, as Evans read name after name into the microphone, sometimes needing to hold back tears herself.

Faelan Quinn, a trans man and anthropology student, said the vigil allowed him to remember the lived realities of trans people worldwide. “For me it has a lot of personal significance, as a trans person who’s experienced different kinds of violence after coming out and knowing countless other trans people with similar experiences. Even if it can be incredibly depressing and painful to think about, it isn’t something that I want to let myself forget,” he said.

Many in the crowd began to embrace one another, literally and figuratively leaning on each other for support.

Rivard said the vigil commemorated people such as Sisi Thibert, a 26-year-old trans sex worker who was stabbed to death in September in a Montreal apartment building by an alleged client.

“For those within the trans community, this is a space where we can come together to grieve and remember those we’ve lost,” Rivard said, “to check in on each other. We feel each and every loss to the trans community very deeply and those losses have a profound effect on us.”

When the list-reading was over, Evans placed the litany of names at the foot of the monument and the crowd placed candles and roses in the snow surrounding it. A reception followed at the Lord Elgin Hotel.

Other events in support of the trans community took place throughout November, which is Trans Awareness Month.