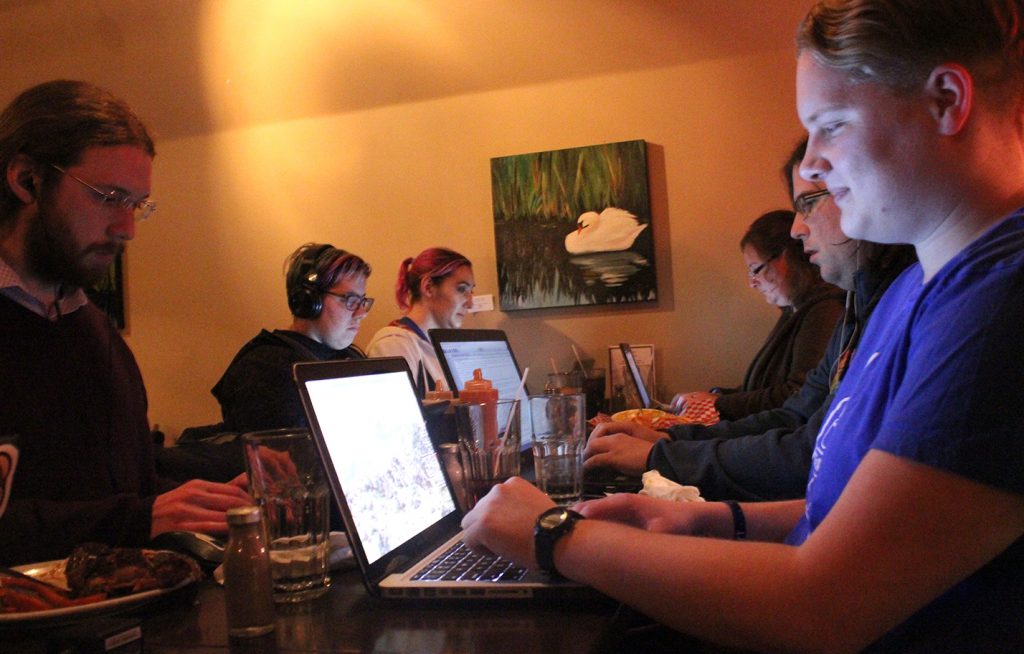 Organizers and participants of the National Novel Writing Month gather at Foolish Chicken in Hintonburg on Wednesday, Nov 22, 2017. Participants at these meet ups bounce ideas off of each other and work on their personal pieces of writing. Emma Fischer, Centretown News.
November 28, 2017

The soft clicking of many keyboards could be heard at the downtown library recently as participants in NaNoWriMo — National Novel Writing Month — tried to write as many words as possible in 15 minutes for the chance to win a prize.

NaNoWriMo was in full swing throughout November, the movement’s 15th year in Ottawa. People gathered for numerous events at various locations across the city, including the Main branch of the Ottawa Public Library on Metcalfe Street, to try to write 50,000 words before the end of the month.

NaNoWriMo began in 1999 with the goal of encouraging writers to dedicate time to creativity and set goals to achieve their literary aspirations, according to its website.

Kim McCarthy, one of the event’s “municipal liaisons” for the Ottawa region, organized several events throughout the month with her three other MLs for the 643 active participants this year. The MLs plan events such as the café crawl, where the participants write in multiple coffee shops in downtown Ottawa over a four-hour block of time.

“The big focus most MLs have is they organize the write-ins and they encourage their participants to have fun and do as well as they can throughout the month,” McCarthy said.

The write-ins are held across Ottawa, at places such as Carleton University, the University of Ottawa, Algonquin College, library branches and downtown coffee shops.

McCarthy and the other MLs also give pep talks throughout the month to keep participants, also known as “wrimos,” engaged and on track.

McCarthy said she urges writers not be perfectionists. “One of the big ideas behind NaNoWriMo is that this is a first draft, it is a rough draft,” said McCarthy. “You’re just getting words on the paper and then you will later polish them and make them something better.”

According to McCarthy each ML – including published author, Angela S. Stone – writes a pep talk for the participants.

Stone, who has worked as a nurse and is the author of several novels — including Sometimes It’s Fate (2011), Unsportsmanlike Conduct (2013) and Duty, Honor, Sacrifice: Toronto’s Elite (2017) — said her pep talks focus on how writers draw on their personal experience.

Scott Delahunt, a previous ML and active member of NaNoWriMo for the past 12 years, said he comes back every year for the time and space to write, as well as to make connections with other writers. “With Nano, I know I can come out to events like this and see people I recognize and meet new people, and just get a lot of writing done,” he said.

“It really allows you to connect with other authors and other writers, not just in your own community but across the world.”