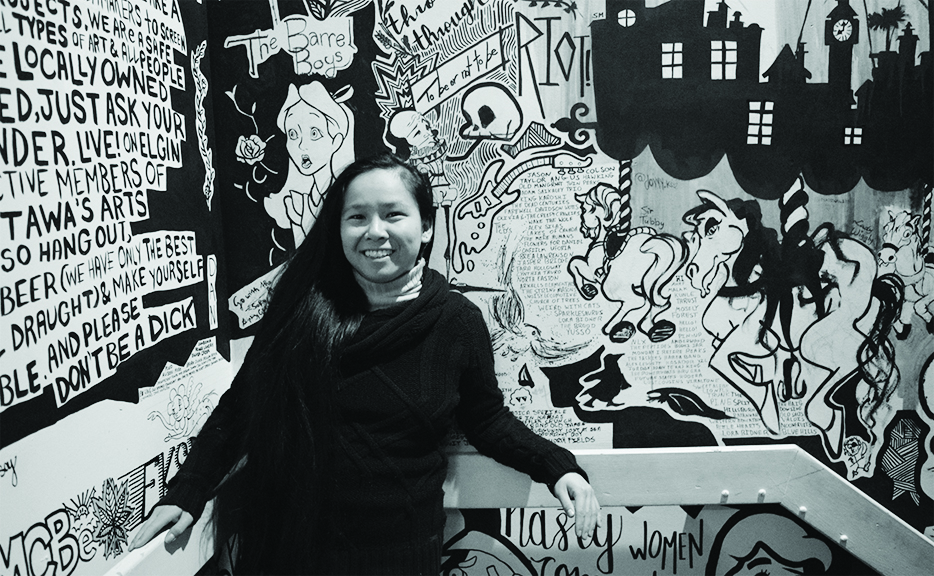 Rhube Knox was, for a long time, a secret poet — like many aspiring wordsmiths, she penned lines in notebooks and stashed them away.

“I’ve written poetry my whole life – never necessarily wanted to admit to it,” she says, laughing.

When her roommate started inviting her to poetry slams, Knox didn’t think it would be her cup of tea.

It was a VERSeFest invitational. And after listening to the performers, Knox quickly changed her mind.

“There were a few poems that gave me chills — my whole body felt it,” says the 24 year-old. “And I was like, OK, this isn’t as stupid as I thought it was.”

Knox attended some writing circles and eventually started competing in Urban Legends Poetry Collective slams, a gladiator-style spoken word competition. She started off writing mostly about love (“which doesn’t score well, but f**k it, it feels good!”) before moving on to the more challenging themes of trauma, gender and sexual identity.

“It’s hard, it’s really hard, to actually get past those roadblocks and actually write,” Knox says. “But once you do, it’s the best. Every time I read a poem in that vein, someone will come up to me afterwards and say, ‘Thank you so much for sharing that. I thought that I was the only one.’ And that makes poetry worth it.”

This year, Knox and fellow poet King Kimbit, also 24, attended the Urban Legends annual general meeting and learned that the collective was looking for women to organize a women’s slam. Knox and King Kimbit agreed to take on the project, saying they felt passionately about the need to stage an alternative to usual mixed events.

“Even though the competitors seem to be pretty much equal, when I look at who wins things, it’s often men,” says Knox. “I think it’s a sign that women’s narratives are often devalued, which is why I think a women’s-only slam — or a non-men slam, because it is inclusive to trans people and femmes — is super-important. It’s often those kinds of narratives that people roll their eyes at, and that people don’t want to give big scores to.”

Knox has personal experience of how the gender dynamic plays out in the slam poetry scene.

“As is typical with men, their word is often respected more,” she says. “I know that first hand as somebody who has lived as a man and lived as a woman. My opinions, my insights were always more respected when I was a man.”

The women’s slam took place Nov. 21 at Live! on Elgin, at 220 Elgin St. Competitors Scores earned at the competition go towards a women’s finals to be held at a later date, and the winner of that round will be sent by Urban Legends to compete at the international women’s slam in Texas in the spring.

Knox says the poetry community in Ottawa is growing in large part because of the city’s supportive atmosphere.

“Anybody new who has come in, who’s new to poetry or shy to share, very quickly feels supported in developing their art and getting up on that stage,” she says. “It feels like they have allies and friends in there, and that’s really contributed. People want to bring people and be a part of that.”

“Urban Legends is kind of like my home,” she says.

King Kimbit has won a Grand Slam with UL, competed nationally on its team, and acted as Team Captain in 2012. She says Urban Legends is a great jumping off point for new artists.

“Slam is a medium for people to come up,” says King Kimbit, noting that Jamaal Jackson Rogers, Ottawa’s poet laureate, has also won a Grand Slam and competed with the Urban Legends team.

“It’s a good way to make connections,” she says of the slam community. “Once your name is out there, you can do whatever you want – if you’re good at it.”

Deepening those community connections is the collective’s writing program for younger poets, Youth Speak.  King Kimbit and Knox are both facilitators, helping youth with whatever writing they want to work on.

“We just cater it to whoever is there,” King Kimbit says. “We don’t want to force it on them. They don’t have to commit to it. They can just come by.”

Urban Legends runs Youth Speak out of the North Gloucester and Main library branches, free of charge on Monday nights from 5 to 8 p.m.

For Knox, participating in Youth Speaks is just as beneficial for her as it is for the youth she works with.

“The thing I love about working with youth is that they’re going to be better than me,” Knox says. “They are so insightful, they are so artistic. The more humanity moves on, the better we get. And you see it in just a few years – somebody maybe a decade younger than me is so far ahead of where I was then.”

The facilitators provide an extra set of eyes for young writers, and can help connect them with other resources.

“Recently I had a young poet who was writing from the perspective of a woman,” Knox says. “We were able to have a really productive conversation, and I read him some poetry of my own that I think really opened his eyes to a woman’s experiences in the world. And as a 14-year-old kid, you don’t really get that.”

This story was produced in collaboration with Artsfile.ca