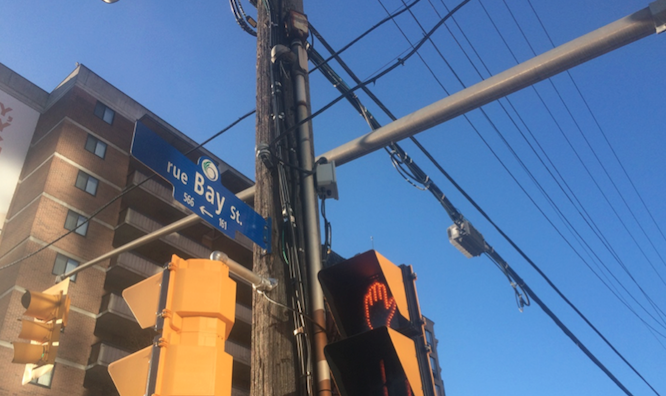 Plans to create a new downtown bike lane on Lyon Street were abruptly abandoned recently in favour of using the space for bus transit, forcing the planned cycling route to nearby Bay Street.

The decision flowed from ongoing construction of the light rail system, expected to be completed early next year. When the intersection of Lyon and Queen was chosen to be the primary point of connection for the LRT Confederation line and Gatineau’s STO buses, planners decided that the intended bike lane needed to move one block to the west.

The city’s decision was met with disappointment by Bike Ottawa, a cycling advocacy group that took to Twitter to express concerns in the wake of the bike-lane relocation.

News of the change filtered out gradually over social media. In the days following, Somerset Coun. Catherine McKenney addressed concerns with a website posting to explain the shift — and acknowledged that the altered plan should have been better communicated to the public.

“Overall, it is my belief that the current Lyon Street design at Queen Street is a necessary step to ensure that all alternative transportation modes are prioritized in the core,” wrote McKenney.

“In the grand scheme of things, this design will concentrate buses on one street segment in order to liberate the rest of the core from buses, while ensuring the flow of pedestrian and cycling traffic throughout downtown Ottawa.”

Heather Shearer, president of Bike Ottawa, voiced mixed views on the subject. Shearer expressed discomfort with the fact that the fine details of the Bay Street plan — and the funds — aren’t currently available, as the 2018 budget hasn’t yet passed.

Shearer said “we’re always happy to hear about protected lanes and are interested to hear more about plans for Bay, but in that particular location we have some early concerns about adequate separation from oncoming motor vehicles, conflict points at intersections, and the steepness of the hill.”

Added Shearer: “Lyon seemed like the obvious connection to Laurier, since there are already lanes on most of Lyon. Lyon and Bay are used by cyclists from all over the city, since they form the connection between the Laurier bike lane, the Ottawa River paths, and the Portage Bridge. This is much more than a local issue.”

The turn lane for buses from Queen to northbound on Lyon will include a new island and stop sign to ensure pedestrian safety.

Shearer applauded the fact that the plan aimed to lessen traffic in the core.

Cyclist Stephen Robards said: “It would be convenient to be able to ride my bike all the way down Lyon in safety. Bay is just one block away, though,” he added. “I also want light rail, I guess you can’t always have your cake and eat it, too.”