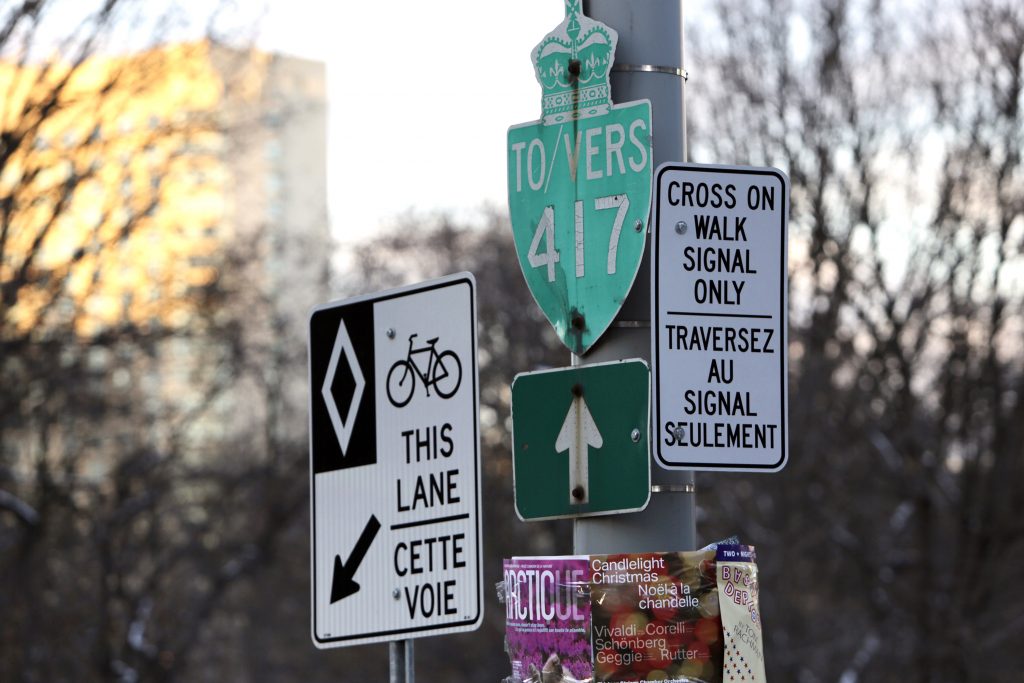 Since 2001, all City of Ottawa services, including street signs and OC Transpo services, have been offered in both French and English. David Kawai, Centretown News.
November 28, 2017

An Ontario government bill could make the City of Ottawa officially bilingual as early as next month.

The measure, included in omnibus legislation tabled on Nov. 14 at Queen’s Park, would ensure that the city’s current bilingualism policies cannot be reversed by future municipal governments.

Ottawa Mayor Jim Watson has said he believes the city is “bilingual enough,” and responded to the proposed Ontario legislation by saying it merely amounts to “recognition that our city is already bilingual, as stated in our bylaws, and that we are doing a good job at providing services in both English and French.”

In 2001, the City of Ottawa adopted a bilingualism policy that gave all residents the right to receive municipal services in either official language. But while that municipal bylaw has been hailed as an essential step to support the city’s francophone community, it isn’t a secure enough protection of language rights, according to John Trent, a political science professor at the bilingual University of Ottawa and a leading advocate of official bilingualism for the capital.

“We wanted to ensure that Ottawa did not at some point slide back if another city council wants to change what has already been done,” said Trent. “It’s not so much about getting things, but making sure what we’ve got will be there in the future.”

The planned provincial legislation was initiated by Ottawa-Vanier Liberal MPP Nathalie Des Rosiers, a constitutional expert who has served as dean of civil law at the U of O.

“As our national capital, Ottawa is already an example of bilingualism. I want the legislature to recognize this special character,” Des Rosiers said in announcing the bill for official bilingualism in May.

Trent is the former president of Dialogue Canada, a national organization that strives to foster understanding among Canadians of all cultural and linguistic backgrounds.  He said the next steps for the city will be to take the policy from legal theory to living reality.

“We don’t just want a law; we want a culture. We want (francophones) to have a feeling that the city is bilingual.”

“Canadians should feel as if their capital is bilingual. But we also want the international community to feel this,” said Trent.

Chantal Beauvais, rector at Saint Paul’s University, said the Main Street university has previously pushed both the City of Ottawa and the federal heritage minister to introduce similar legislation to guarantee no future claw-back of bilingual services in Ottawa.

Beauvais said the proposed Ontario legislation is important for the francophone community in Ottawa.

“When you’re a minority, you need to have some level of comfort that your culture and your language are recognized. It will create a sense of trust in the community and give (francophones) proper recognition,” she said.

About 50 per cent of students at Saint Paul’s are francophone, and the proposed Ontario bill sends a comforting message to French speakers coming from outside of the city to study in Ottawa, said Beauvais.

She added that the push for official bilingualism is “never quite over” because these steps may help the francophone community flourish. When that happens, there will be more demand for French-language services from the municipal government.

“Self-assertion and the quest for autonomy are on-going processes,” she said.

Ontario has a long history of bilingualism policies, dating back to the 1960s, when it began guaranteeing the provision French-language services in designated areas with significant populations of francophones, including Ottawa.

While bylaws ensuring bilingualism in the City of Ottawa were adopted by the municipal government upon amalgamation of the 11 previous municipalities of the former region of Ottawa-Carleton in 2001, the new City of Ottawa was not deemed “officially bilingual.”

The push for official bilingualism has come from several organizations — including the coalition of groups called the Movement for an Officially Bilingual Capital of Canada — and has focused on convincing the provincial government to amend the City of Ottawa Act.

The coalition has garnered the support of more than 66 community organizations. Its mandate cites the vision of the Royal Commission on Bilingualism and Biculturalism in 1970, which recommended full equality of French and English in Canada’s capital city.