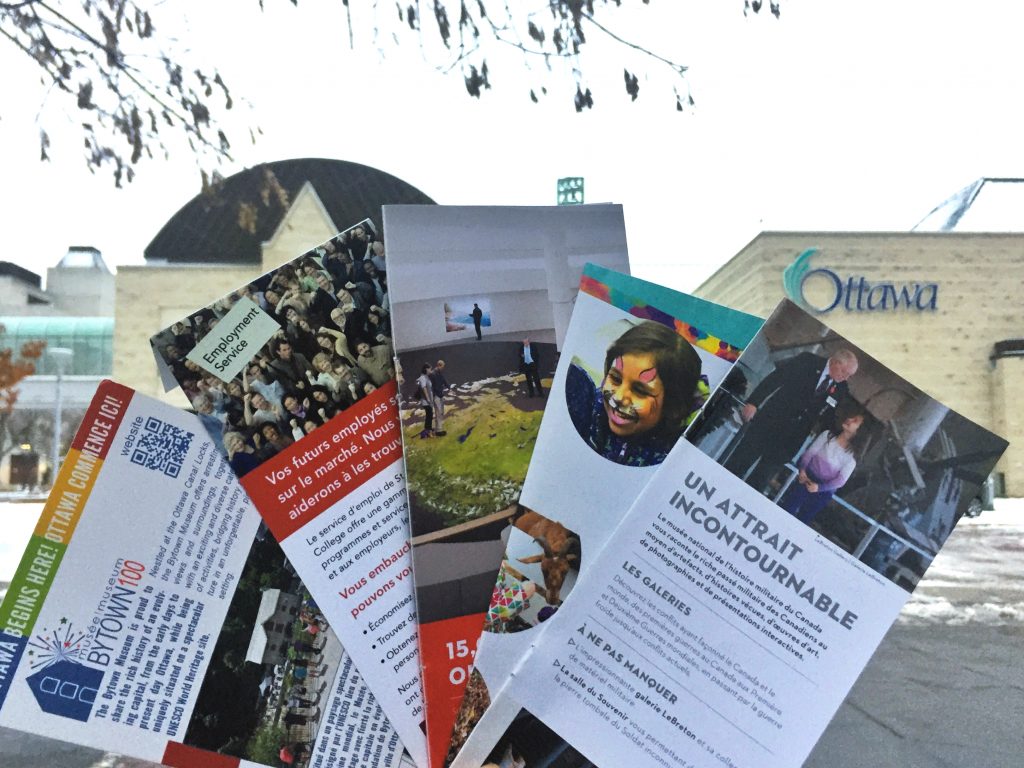 The Accessibility Advisory Committee says that communication material, like what is available to the public at City Hall and other municipal buildings, is not inclusive enough. Amanda Marsh, Centretown News
November 28, 2017

The City of Ottawa’s accessibility advisory committee wants the municipal government to include more people with disabilities in its public outreach campaigns.

The motion was discussed on Nov. 22 and unanimously passed.

“It’s such as simple idea and a small gesture, but it goes a long way to building a world class city that is inclusive and accessible to all,” said Brian Wade, chair of the committee. “As a person with a disability, I feel that I can call Ottawa my city, that I matter.”

Wade said the advisory group had noticed that during public consultations, the displays prepared by city staff frequently featured people walking around and children playing, and that very few of the displays showed people with living with disabilities.

A provincial action plan imposes standards meant to ensure that “people living with disabilities can enjoy increased participation in their communities.”

The action plan also states that one in seven people in Ontario has a disability.

According to the AAC, this population is underrepresented in municipal communication materials.

“The AAC has noted this for years and things have not really changed,” said Wade. “So as a group, we have put forth a motion to encourage the city to be more inclusive with its communication materials.”

Mike Gifford, the founder of Open Concept Consulting Inc. and an advocate for resolving accessibility issues, said that many organizations have tried and failed to meet accessibility requirements. Gifford also says that in many cases, “the city isn’t approaching accessibility in a way that ensures that the new technology it acquires meets the goals of the AODA.”

Ontario was the first Canadian province to pass a law that aims to improve accessibility in areas that impact the lives of people with disabilities. The Accessibility for Ontarians with Disabilities Act, which was introduced in 2005, established standards and procedures on how to make Ontario accessible by 2025.

There are various deadlines that organizations must meet during the transition to full accessibility.

The City of Ottawa does have a policy calling for communication material to fairly represent the diversity of Ottawa. And Jocelyne Turner, the city’s program manager of public information and media relations, said that the department is “always striving to be better.”

In September, Turner met with the AAC to discuss ways to improve the city’s representation of people living with disabilities in city brochures, advertisements and other outreach material.

“We had a productive conversation,” Turner said. The committee suggested that the language in communication materials become more inclusive, and that public engagement activities be more accessible.

Municipal communication material can be developed weeks or months in advance for a big campaign. On the other hand, sometimes material is produced day-by-day depending on what situations arise.

Turner said that in all these cases, she and her colleagues are, “endeavouring to create more equitable communication material.” She added: “We strive to depict the city’s diversity.”  .

Public communication material being created for the June 2018 municipal election was brought to the AAC in order to get constructive feedback, she noted.

According to Turner, she wants the AAC’s critiques on the communication material to help guide the creation of material encouraging citizens to vote and where to cast ballots.

“That’s our goal — to meet the expectations of the community,” she said.

According to Wade, including people that have a disability — such as someone using crutches or a wheelchair — is an important step to ensure people don’t feel excluded.

The cover page of the 2018 city budget includes a person with a disability. Wade said he welcomed the depiction.