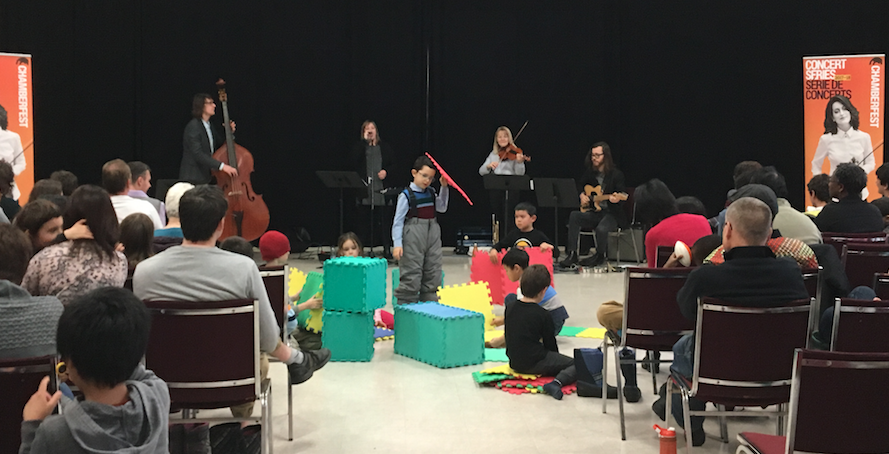 Picture caption: The Laura Swankey Quartet, featuring Swankey on vocals, Emily Denison on trumpet and violin, Patrick O’Reilly on guitar, and Andrew Furlong on the upright bass, performs a Xenia concert at Dominion-Chalmers United Church. The concerts are designed to welcome children on the autism spectrum and their families. Julia Paulson, Centretown News
November 29, 2017

A third of the chairs were empty as children raced around the room, shouting, clapping, and playing with toys. At one point, a young boy approached the guitar player and attempted to use his instrument. The jazz quartet played on.

It was a scene from many parents’ nightmares, but for these families, it was a refuge and relief.

On Nov. 19, Autism Ontario and Ottawa Chamberfest teamed up to host a concert meant exclusively for children on the autism spectrum and their families.

The performance, titled “Xenia – Changing Skies,” was held at Dominion-Chalmers

United Church and was offered free of charge. It was performed by the Laura Swankey Quartet.

Vanessa Goymour, director of community engagement and education at Chamberfest, said it can be hard for families of children with special needs to find ways to spend their time together.

“There’s very few activities they can do as a family with a child who has autism because the child sometimes cries out, or needs to move, or whatever,” said Goymour. “So they can’t go to a regular theatre, they can’t go to the symphony, there’s so many things they just can’t go to, so they feel somewhat isolated.”

While there are a wealth of social programs in Ottawa designed for children with special needs, Goymour said Ottawa needs more variety. “There are more and more programs for kids who have autism to participate in, but not with their siblings or their parents.”

The Xenia concerts originated in Toronto, created by the Cecilia String Quartet. Sarah Nemetallah, one of the group’s violinists, said that traditional concert protocols discourage children with autism away attending performances.

“It may be a generalization to attach elitism to all classical or jazz music concerts… (but) it’s difficult to deny that (these concerts are usually enjoyed) in stillness and silence,” said Nemetallah.

Xenia concerts do more than combat stifling social norms, though. They are specifically designed to accommodate the needs of children living with autism spectrum disorder, also known as ASD. This includes providing open seating so children can move in and out of their chairs easily, soft mats near the stage to play on, toys and fidgeting devices to use, and quieter music to listen to.

They’re also not the only concerts in Ottawa designed for this purpose. Erin Parkes, founder and executive director of the Lotus Centre in Kanata — a music school catering specifically to children with special needs — said her son, who has ASD, was part of the reason she founded her business.

“Trying to find extracurricular activities… where he would be able to participate where it wouldn’t be prohibitive in the way it was presented or he would be disrupting everything — it was really hard,” said Parkes.

“The more research I did the more I found how much kids with special needs often have a special affinity for music, and I’m not just talking about savants,” she added. “All of these kids should have an opportunity to learn.”

The Lotus Centre works with the National Art Centre Orchestra to host concerts at the NAC designed to accommodate children with special needs. Dubbed “The Music Circle,” Parkes’ program focuses on first providing educational workshops for the children on the instruments and music being played, and then presenting the concert.

The Music Circle concerts are also free. Both Parkes and Goymour said charging families with special needs children for the performances would make them largely inaccessible.

Mike DeBreyne, a parent in attendance at the Xenia concert, agreed.

“All of these things add up of course, so anything we can get for free or at a discounted price is great. A lot of times for a lot of parents, it’s just that you don’t know how they’re going to react,” said DeBreyne. “That’s why the free ones are great.”

The Dominion-Chalmers concert room was near capacity for the recent Sunday concert, despite it being the first day of snowfall for the season. Goymour said each concert attracts about 100 people.

At the end of the concert, the children crowded to the front of the room as the musicians let them take turns touching the instruments and talking into the microphone. Parents waited patiently by, preparing to leave this safe haven behind.