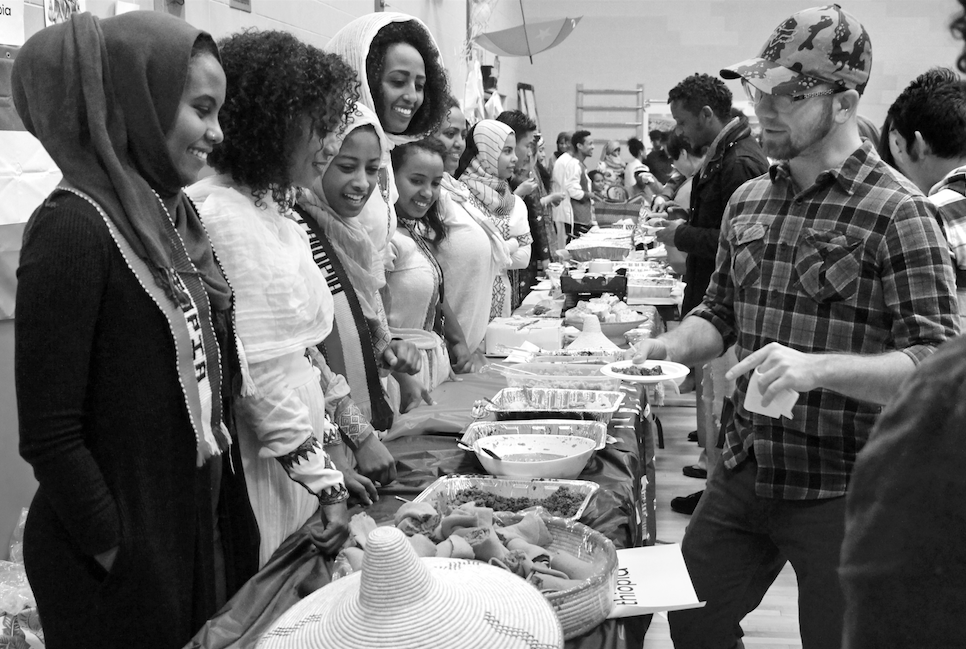 Kevin Bush, principal of the Adult High School on Rochester Street, says it’s important to celebrate the many cultures present in the Centretown school.

The school held a Global Village festival on Dec. 7, aimed at showcasing the multicultural mosaic of the student population. The cafeteria was closed and students were invited to gather in the gym for food and music in celebration of the different countries the students come from.

Entering the gym brings a rich variety smells of different spices and flavours from around the world. Some participants had flags draped around their shoulders, many were dressed in traditional clothing.

During the event, students came to the stage in the centre of the gym to perform songs, skits or dances to celebrate and share their cultural identity.

Bush said the event is important to the school because “it emphasizes the fact that it is an oasis of peace and an environment of inclusivity.”

Bush has been principal at the school for three years. He said the Adult High School is focusing more on its collective identity and the staff are currently brainstorming ideas for an official emblem.

“We are thinking of the phoenix for us, the idea of rising from the ashes, that whole notion of rebirth.”

Mona Cheaib is a Lebanese student at the school who was volunteering handing out plates and cutlery as people walked in.

“You can learn a lot about other people by tasting the spices in their food and listening to their music,” said Cheaib. “You get to know more about where they come from.”

Kate Naumova is a math teacher at the high school and was in charge of organizing the event this year. Naumova moved to Canada from Russia, where she was a university professor. She said that when she came to Canada her English was shaky so she studied at the Adult High School, and has now been teaching at the school for 11 years.

Naumova said the school is like home to her, where all her friends are.

“I remember doing this event as a student and having the Russia table, so it’s important to me that I can carry on that tradition.”

She added: “You see students differently here. A student may be shy in the classroom because maybe their English isn’t great, but here they can be themselves. It’s a real community effort, because all the staff and students get involved.”

Naumova said that they have no rehearsals for the event and anyone who wants to participate is welcome. There are no auditions for performances and many of the dances that were performed involved people from the crowd joining in halfway through the song.

Another student, Abdullah Usaman, represented Afghanistan. “Sharing my culture is important to me,” he said, “to show that we are good people.”