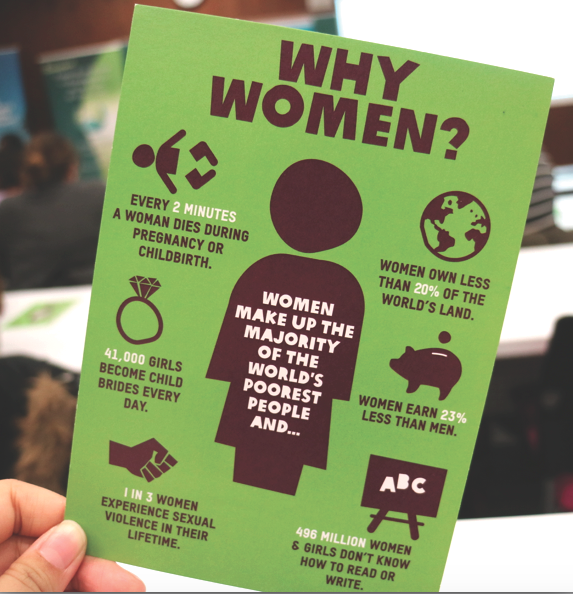 This card was placed on each seat for those who attended the film. Photo: Vera He, Centretown News
December 23, 2017

A screening of the Canadian documentary film A Better Man was held at the University of Ottawa on Dec. 2 as part of the 16 Days of Activism Against Gender-Based Violence campaign in Ottawa, which urges women to speak out about their experiences of abuse.

16 Days of Activism is an annual campaign to counter violence against women that starts on Nov. 25 with the International Day for the Elimination of Violence Against Women, and ends on Dec. 10, International Human Rights Day.

For Canada, the campaign also includes another important date: Dec. 6, which this year marks the 28th anniversary of the 1989 Montreal Massacre, the murders of 14 female engineering students at Montreal’s Ecole Polytechnique.

This year, the campaign kicked off in Ottawa with a proclamation by Mayor Jim Waston’s at city hall on Nov. 25.

A Better Man is co-directed by Attiya Khan, a gender-based violence survivor. The film is about the abusive experience Khan had two decades ago involving her ex-boyfriend Steve when they were living and going to high school in Westboro.

Before the screening of the 76-minute documentary, audiences were warned about explicit descriptions of abuse in the film. A counsellor was available for people who needed to talk during the screening and tissues were on hand.

When the lights slowly turned on at the end of the film, sobs could be heard and some people’s eyes were still red from crying.

According to Zoe Mallett, a volunteer from One Film Arts — one of the groups that co-organized the screening — the campaign’s theme for this year is to “leave no one behind.”

“I think it’s really important to be present for this kind of event because our presence does count,” said Jack Latour, a self-described feminist who attended the event. “You can think that it’s just one voice, (but) it’s not. It is what’s changing things.”

According to Delahanty, having conversations about gender-based violence is important because while the issue has gained much public attention, some people are still quiet about their personal trauma.

“Solutions and preventions can only be found when people are willing to come forward and talk about their experiences,” said Delahanty.

Delahanty acknowledged that Canada has made significant progress towards curbing violence against women, but she said more could certainly be done.

“As the issue is coming out more and more, we realized that we should’ve been doing a lot more all along,” said Delahanty.

Throughout the discussion, panelists emphasized the importance of having conversations about domestic violence and answered questions that the audience raised.

“The conversation,” Mallett said as the event concluded, “didn’t start here today and it’s not going to end here today.”