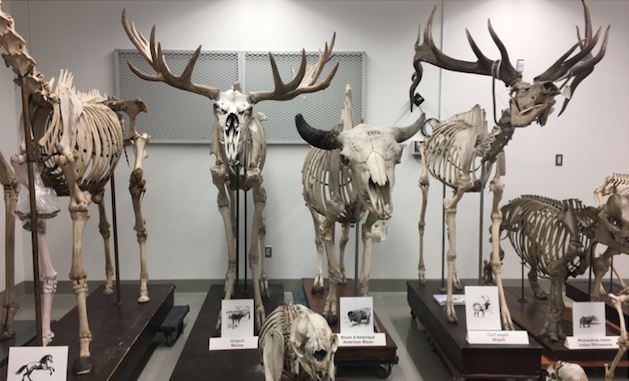 The Canadian Museum of Nature opened the doors to its Gatineau research and collections centre in October, showcasing for public visitors only a fraction of the 14.6 million specimens. Photo: Meredith Lauzon, Centretown News.
December 23, 2017

From a beast 4.5 metres long to the most microscopic form of life, every organism needs a name.

Judith the dinosaur — a recently identified, SUV-sized creature from the Jurassic era — isn’t the only new species named lately by the Canadian Museum of Nature.

But it’s definitely the biggest.

The McLeod Street museum revealed in its latest annual report that its scientists have named 38 new species over the past year. The release of the report was a highlight of the federal agency’s annual general meeting on Dec. 5.

Judith — a member of Spiclypeus shipporum, a new species of the family of horned Triceratops dinosaurs discovered in Montana — was an exciting acquisition for the museum, but CMN spokesperson Dan Smythe said many of the newly described organisms are little creatures that people don’t usually think about, such as beetles and diatoms (a group of microalgae).

The museum has 14.6 million specimens in its collection, and each year sets a goal to describe a certain number of previously unclassified species. In the 2014/2015 year, the goal was 10 new species, but that year 39 were named; since then, the scientists have always exceeded their new target of 20.

The museum has been able to up its numbers because of a shift in focus, said Robert Anderson, director of the Beaty Centre for Species Discovery. The centre was named after a $4-million investment from the Ross Beaty family earlier this year, and the goals are to focus on identifying new species, preserving their remains and digitizing museum collections.

Anderson said the boost in naming and describing new species is a tribute to the work that CMN scientists and research associates — often retired professors — are doing at the museum.

Part of what the scientists at the Beaty Centre do is fieldwork, collecting samples nationally and internationally. The museum focuses on Canada’s Arctic, but Anderson said fieldwork in tropical locations has also proven successful in finding new species.

Specimens are put under the microscope in museum labs for DNA sequencing. If the species seems to be different from previously documented organisms, further research is conducted to be sure the species is new. Then comes the naming of the specis and publishing of the research results, said Anderson.

Mark Graham, vice president of research and collections, said there is a “type specimen” — basically the best specimen the museum has, and which becomes the basis for the description and name — and sometimes “paratype” or additional specimens, which the museum keeps, as well, and will loan out to other researchers.

The type specimen’s description will detail its physical form and characteristics, and specify what differentiates it from other species.

Anderson said since Swedish botanist Carl Linnaeus developed the the system of binomial nomenclature for naming species in the 18th century, there have been 1.5 million species formally identified, with an estimated 10 million other species still unnamed.

Generally, large organisms such as mammals, birds, and fish — as well extinct megafauna such as Judith — are all described, while a multitude of smaller species still await proper identification.

Graham, who was the head of the science program on the Canada C3 ship voyage this summer, said samples of species were collected on land and in the water. Those samples will be processed over the coming months, Graham said, and in about a year’s time, the museum should be able to determine if there are new species among the creatures collected.

He called the museum’s massive collections facility in Aylmer a “reference library” for specimens not currently being used in exhibits.

Anderson said important information about ecological shifts and climate change — including the altered ranges of species — can be derived by comparing specimens collected in the 1950s and 2010s in Ottawa, for example.

In February, the museum will host the Beaty Centre symposium Biodiversity Conservation for a Sustainable Future. Anderson is one of the event’s organizers, and said the symposium will focus principally on endangered species in Canada, the traditional Indigenous approach to living harmoniously with nature, and training the next generation of students to be involved in conservation.