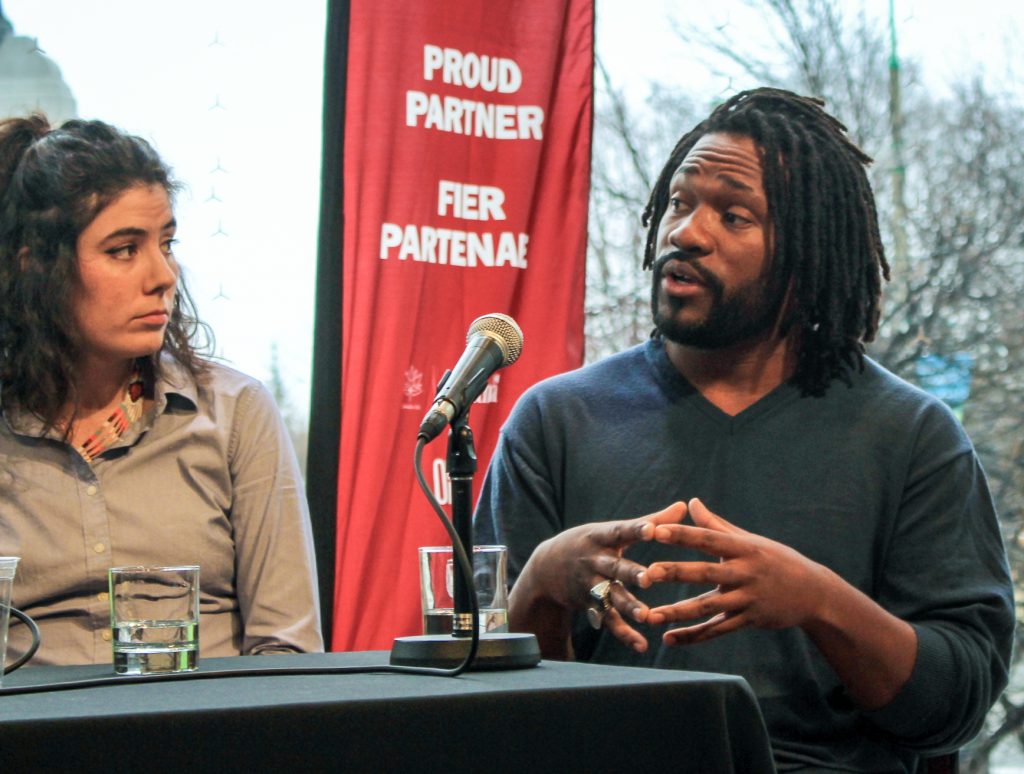 Thirteen of Canada’s poets laureate gathered in Ottawa from Dec. 1-2 for the Laureate City event held at the National Arts Centre, marking the first-ever formal gathering of the nation’s public bards.

The participating poets — typically appointed for a term in their respective jurisdictions to promote the appreciation of literature and to produce poems for public occasions — came from Yukon, Victoria, Saskatchewan, Calgary, Sudbury, Mississauga, Montreal, Halifax, Fredericton and St. John’s.

The weekend kicked off with readings from several of the delegates followed by a late show dedicated to young poets.

Four poets laureate had a panel discussion about their roles and mandates, and some of the challenges they face.

While they all have the title of poet laureate, their roles differ from city to city.

However, she doesn’t get a budget or stipend the way the term-based poet laureates in Ottawa and other places do. .

Johnson said for her, when it comes to a laureate’s mandate, promoting and supporting spoken-word poetry and literary arts in general are the top priorities.

“From there, each laureate can establish their own personal mandate . . . but to me, I see it being the arts first.”

Jackson Rogers said he feels it is one of his duties to empower his community through his work. He works with youth in detention centres to help them express themselves through poetry and rap.

“The stories and the poetry that comes out these young men — most of them are from racialized groups — they will blow your mind and also open you up to understanding that we need to hear and experience in Canada more of these stories.”

Rebecca Thomas, Halifax’s poet laureate and an Indigenous woman from the Mi’Kmaw nation, echoed that sentiment. She said she also works with Indigenous youth poets and those from marginalized communities.

“I like to take my mic as poet laureate and pass it on, because I have the power to do that,” she said.

Thomas added that she sees her role as an opportunity to speak for her community as best as she can.

“I am Mi’Kmaw at the end of the day and that’s not something I take lightly.”

Being a poet laureate doesn’t come without its challenges.

George Murray, poet laureate for the capital of Newfoundland and Labrador, said at some point he resigned from his position after a conservative city council cut the city art budget.

“I said, ‘Take the rest of the funding that you would have given to me, and spread it amongst the artists who you’re cutting it from.’ ”

Murray said after his actions garnered media attention, the city reinstated the budget and asked him to return to his position.

She said because her poetry focuses on the relationship between the federal government and Indigenous communities, she often tries to make her viewpoints more “palatable” when speaking to officials.

“Creating these palatable arguments so people would listen puts a lot of effort onto me — to hold the hands of the people who make all the rules and have all the power so that they can feel supported when they’re making these decisions.”

Rebecca Zseder, Mississauga’s youth poet laureate, said being invited to the Laureate City event was an “opening to a world I didn’t know existed.”

“Just to be able to stand up and perform with all these really, really important people … it was just incredible to share the stage,” she said. “I feel like in today’s world, poetry is really overlooked and this weekend was just advocating for the fact that it shouldn’t be.”