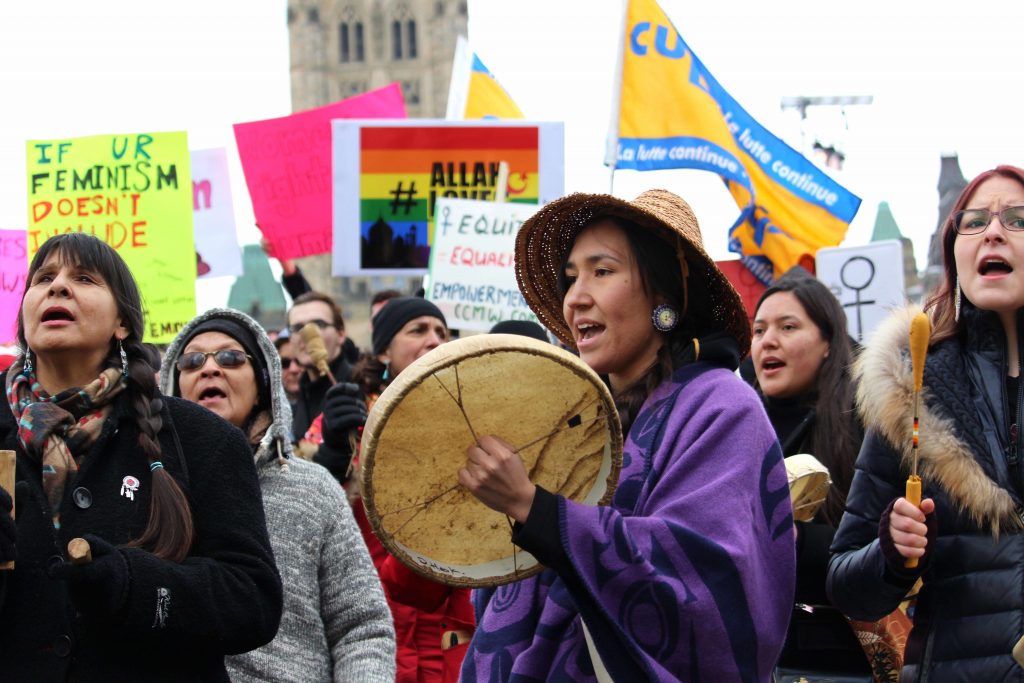 The organizer of the event that saw thousands of women pour into downtown Ottawa on Saturday to march for greater power and equality — and against violence and injustice — says a key goal for the movement in 2018 is for women “to be marching 365 days of the year through your decisions and your choices.”

Catherine Butler promoted the second annual Ottawa Women’s March with a promise that this year “our voices will be stronger, louder. We will no longer be silent. Women in Ottawa have had enough.”

Butler and Sara Bingham, executive director of Women’s March Canada, said they remember being surprised by the large turnout at the inaugural march last January — coinciding with a massive rally in Washington, D.C. the day after U.S. President Donald Trump was sworn into office.

The Ottawa march leaders were expecting only a few hundred people to come out in solidarity,  but an astounding 6,000 people participated.

This year, the march from Parliament Hill to the Bronson Centre drew between 6,000 and 8,000 people. Women, men and children gathered in front of the Peace Tower around noon — all ready to parade south and west through Centretown carrying signs and voicing chants.

“2017 was a wild year,” Butler had stated in the press release announcing this year’s march. “From the #MeToo movement, to the TimesUp campaign, and the recognition that women have a long way to go to eliminate violence, harassment, discrimination, and an unjustifiable lack of representation in our political systems.”

Bingham says she attributes the rising anger among women in North America partly to Trump’s diminishing of women’s rights. From his cuts to funding for female reproductive options to various misogynist comments, including one in which he called Miss Universe “Miss Piggy.”

“I think there was intense anger and support for those south of us last January and this year with everything that has rolled out in 2017, (it) has illuminated that there is so much work to be done — and the march is the signal to the world saying, ‘We’re here and we got to work on things,’ “ said Bingham.

The TimesUp campaign took centre stage at the Golden Globe Awards in Hollywood earlier this month. The movement was launched by entertainment figures to combat sexual harassment against women. Actors such as Reese Witherspoon, Meryl Streep and Emma Stone wore black on the red carpet and brought female activists as their dates.

Oprah Winfrey also took the podium to tell the world there is a new day for women on the horizon — her stirring words rippled around the world for days.

Bingham and Butler say they stand with the #MeToo movement and the TimesUp campaign.

“It’s helping women realize they have a voice,” said Bingham. “It sounds very simple: yes, we have a voice. These campaigns and marches are showing that we have an effective voice and we need to amplify it and move it forward.”

Butler said she has some priorities for change: “The first one getting more women elected into municipal and provincial politics. The second is to support our Indigenous sisters and raise awareness to the disproportionate violence towards Indigenous women.”