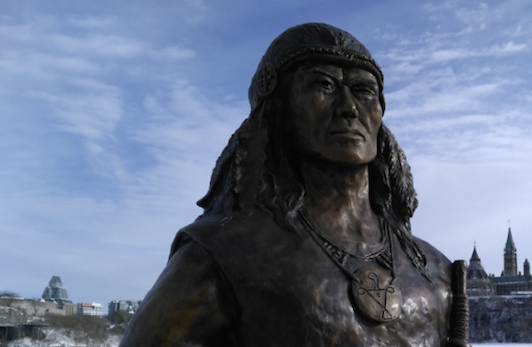 A life-sized sculpture of Chief Tessouat has been erected on the grounds of the Canadian Museum of History. This memorial marks the 450th anniversary of the birth of the Algonquin leader responsible for controlling trade along the Ottawa River in the 1600s. Photo: Cassandra Plourde, Centretown News.
January 23, 2018

The capital region recently bolstered its symbolic Indigenous presence with the erection of a life-sized sculpture of Chief Tessouat, the Algonquin leader who was responsible for controlling trade along the Ottawa River in the 1600s.

The influential leader, little known to most residents of the region, is now receiving the recognition he deserves, area Indigenous leaders say. A ceremony that unveiled the eight-foot bronze monument was held at the Canadian Museum of History in early November on the 450th anniversary of the chief’s day of birth.

The unveiling along the north shore of the Ottawa River, directly across Parliament Hill,  included a traditional prayer, drumming, dancers and a purification ceremony performed by Indigenous elders.

“Tessouat was someone with great power, with great diplomacy and love for his people,” said Georges Lafontaine, information officer for the Algonquin Anishinabeg Nation Tribal Council. “For us it was important that we take the opportunity in Canada’s 150 to get the government to recognize that and put this statue in place.”

The place where the Tessouat statue was erected is close to an ancient Indigenous burial site that was excavated in the 19th century by Dr. Edward Van Cortlandt, a pioneer physician and antiquarian who lived in Centretown until his death in 1875.

Tessouat was chief of an Algonquin tribe that was situated for more than 10 years along the river at Morrison Island, near modern-day Pembroke. According to the Dictionary of Canadian Biography, Samuel de Champlain – the French explorer who played a major role in founding Canada – encountered Tessouat on several occasions.

In 1613, Champlain met the chief during a feast at Tessouat’s home, where Champlain hoped to establish a friendly relationship and advance farther west along the river.

But after the feast, Tessouat refused to allow Champlain passage and introduced a new policy to ensure the Indigenous community’s continued influence on fur trade along the river.

“They controlled everybody that passed up and down for trade and to exchange fur with the Europeans,” said Lafontaine. “They all passed through Morrison Island and each time, Tessouat was collecting a bit of a tax. Each time the Europeans passed by, they had to respect that.”

Verna Polson, Anishinabeg Tribal Council Grand Chief, said in a press release that Tessouat’s birthday was a special day for the community as they gathered to celebrate an important historical figure that she feels is too often left out of Canadian history.

“This monument of the great chief, which rests on traditional Algonquin territory, will stand as a reminder to future generations of the importance that Tessouat and all First Nations had in the early formation of Canada,” Polson said.

The statue of Tessouat stands with his back towards the river, at the rear of the museum, with Parliament Hill looming as a backdrop.

Allan Elder, research manager for First Peoples and Early Canada at the museum, said the organizing committee and the Anishinabeg community were “very interested in having the statue near the place where Tessouat quite likely stood.”

The land the museum occupies today was a natural canoe portage for those travelling around the Chaudière Falls on the way up or down the river.

Lafontaine said his hope is that people will walk by, see the statue and be reminded of the Indigenous presence in the area as well as First Natons’ instrumental part in Canada’s history.

“Tessouat was a kind of father to this country as it became Canada. He should have been recognized way before this statue.”

Minister of Canadian Heritage Mélanie Joly said in a press release that acknowledging Canada’s past as multicultural and including the Indigenous community in historical celebrations is a top priority.

Lafontaine said there is not enough respect or representation of Indigenous culture in the national capital. But he said this monument is very symbolic and very important to the Anishinabeg community.