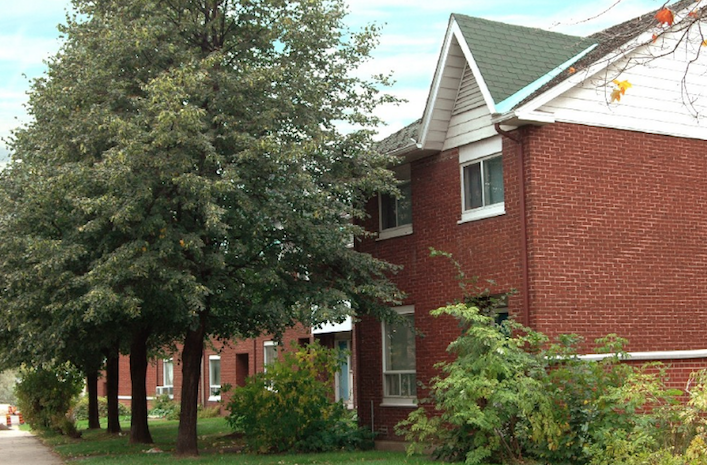 An eight-storey, 148-unit affordable housing project is set to rise in Centretown between Booth and Rochester streets.

The federal and provincial governments have granted $11 million for the project, while the City of Ottawa is budgeting another $1.5 million in fee waivers and other incentives.

The building, which will be constructed by Ottawa Community Housing, is part of Action Ottawa, a city program aiming to increase low-income affordable housing.

OCH’s CEO Stéphane Giguère said the project will help cut down the lengthy list of people waiting for affordable homes.

“We saw the needs of the community and we saw the 10,000 people on the waiting list,” said Giguère. “We wanted to increase the number of people we can help and provide more affordable housing for those who need it.”

The L-shaped apartment building will be built at 811 Gladstone Ave., in the Rochester Heights neighbourhood. The building will replace the 26 townhouses that were constructed on the property more than 50 years ago, and which the OCH said have reached the end of their service life.

Giguère said almost all townhouse residents have moved out or are in the process of moving. All residents requiring rehousing are provided support and other housing options from OCH, he said.

Ottawa Community Housing is the largest social housing provider in Ottawa, currently providing homes to 32,000 tenants and maintaining 15,000 residential units across the city.

Giguère said with the Gladstone project, the OCH is replacing the older houses with a new building that will serve a larger number of residents. He said the agency is looking to maximize the occupancy rate of the new building and ensure Centretown is an affordable place for all levels of income.

“Affordability is something that is prevalent in the conversation happening around Ottawa,” said Giguère. “At OCH, it is important that we provide affordable and sustainable homes that meet not only current needs, but also future needs.”

OCH said the new building will be more environmentally sustainable than the homes that came before it, and planners are still working out various energy-efficiency elements that will be implemented.

Construction is set to start on the units later this year, with completion slated for early 2020.

Two other affordable housing projects were approved in December as part of the city’s Action Ottawa program. One project, led by the Ottawa branch of the Canadian Mental Health Association, received $1.2 million in federal and provincial grants for eight supportive condominium units across the city.

The other project is led by the Shepherds of Good Hope, which plans to construct a 42-unit supportive housing building at 765 Montreal Rd. with $6.3 million in government grants.

The housing focuses on mental and physical support for its residents, as well as affordability.

Leah Myer, manager of marketing and communications at Shepherds, said the housing will have full-time staff and 24-hour support for its residents.

“Everyone who lives in the facility will either be formerly homeless or at the risk of becoming homeless,” she said, noting that tenants will be individuals coping with addiction, physical or mental health problems, or “trauma challenges.”

Myer said the goal of the housing is to provide people with a permanent home, and to give those individuals the “real wrap-around support they need.”

“The main goal is to continue to include affordable units in our city, to enable families that are low-income to live in our downtown, and to revitalize existing Ottawa housing communities,” he said.

Fleury said the older housing units in the city are not enough to meet the current demand.

“We have existent properties that frankly need to be torn down and rebuilt,” he said. “There’s an opportunity to do it right.”

Fleury said the city is being dynamic in how it plans to restructure supportive housing throughout the city.

“This gives us an opportunity to revitalize a section of our community,” he said. “It’ll bring in more density, and bring in better units for the tenants.”