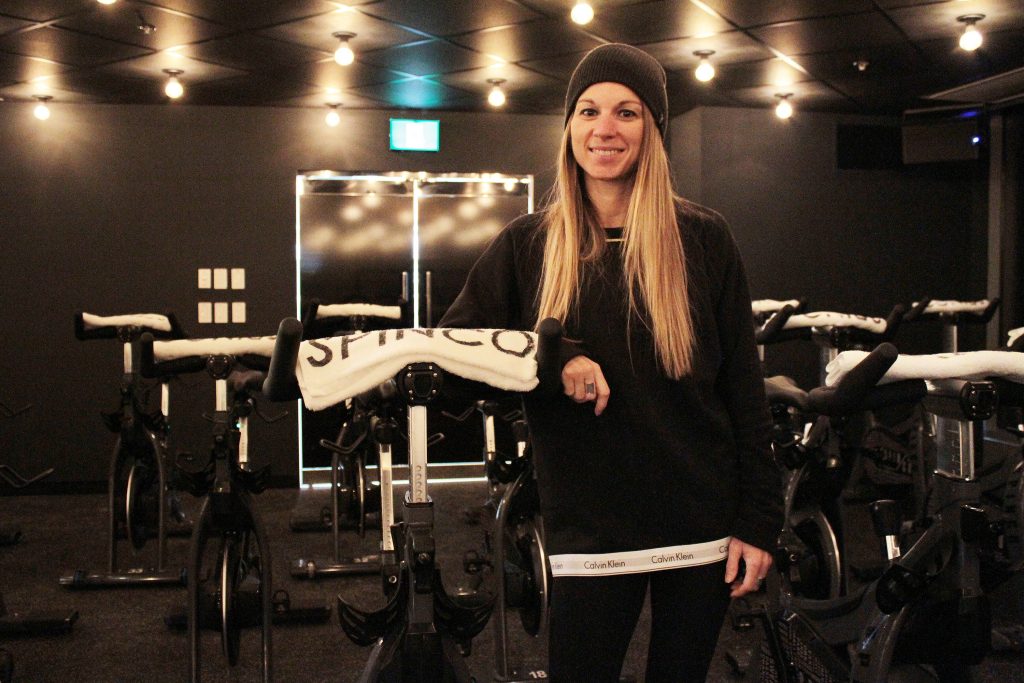 A dark room, sweaty bodies and heart-pounding beats — it’s not the new bar in the Market, but the latest workout craze taking Centretown by storm.

Indoor cycling or “spin” is a fitness trend that’s been around for decades. But it appears to be gaining increasing popularity in the capital with two, new downtown spin studios opening in recent weeks.

Wheelhouse Cycle, founded in Westboro, opened the doors to its second location on Bank Street in Centretown on Dec. 9, and SPINCO — a company from Kelowna, B.C. — opened for business on Slater a month later on Jan. 8.

The workout is low-impact but high-intensity, it improves cardiovascular fitness but also targets a number of large, important muscle groups. “What people can expect and experience in their first class is a fun, motivating and supportive environment that they can always step into whenever they need it,” said Janae Gallant, an instructor at Wheelhouse.

Gallant said it was important to open the second studio because of the natural growth of the community and the consistently packed space. “Other small businesses have started putting down roots here and are flourishing because this neighbourhood really values and supports local,” she said. “We love getting to be a part of that and offering something new to the people living and working close by who couldn’t otherwise experience something like Wheelhouse.”

SPINCO owner Nicole Hilstob said the best part about their location is that it’s in the hub of Ottawa. “There are literally 250,000 people within 10 kilometres of the studio,” she said. “It’s close to all of the hotels, the mall, office towers, Ottawa U and it’s right on the transit way.”

Since opening in 2015, Wheelhouse has helped to develop a spin culture — like the one that’s taken hold in New York, California and Vancouver — that was never before seen in the capital. Co-founder of Wheelhouse Cycle, Nadine Hogan, said the studio was the first of its kind in the city. “One of the things we’re proudest of is introducing spin to Ottawa, which has created space for other studios and the need for spin across the city landscape.”

Gallant said traffic to the Centretown Wheelhouse location has exceeded expectations. “Things are going better than we could have imagined,” she said. “The most exciting part is the huge influx of brand new riders who live in the area, which affirms that we are definitely in the right place.”

Hilstob said SPINCO has seen a steady stream of clients walk through their doors as well.

“It’s amazing that there is a spin culture in Ottawa and I am sure every studio brings something different,” she said. “For us, we opened one week ago and the response to classes has been unbelievable.”

Kevin Sourapha has been trekking from his apartment in the Byward Market to the spin studio in Westboro either by public transit or road bike, so he said he’s excited the new, closer options he now has for his favourite workout.

“Centretown is quite the hub as it’s close to the business sector, but also close enough for university students to get to,” he said. “With the new studios being so easily accessible, it allows for people to get a quick sweat in.”

Sourapha said that “spin” definitely has a solid place in the Ottawa fitness community. “When you’re in the class you feel connected to the instructor but also the other riders around you — and it doesn’t just stop once you leave the studio,” he said. “The instructors are always there to chat and to get to know the riders.”

“At SPINCO, we believe strength comes from within but are stronger as one,” said Hilstob. “Our aim is to infuse our community with a positive, never-quit attitude that reaches far beyond the walls of our studios.”