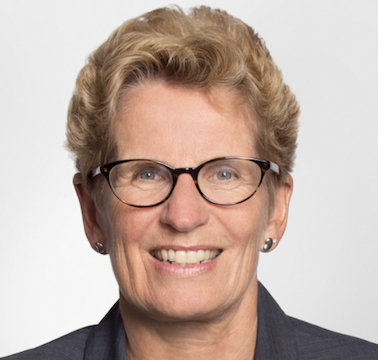 Editorial: Ontario Premier Kathleen Wynne's push towards a $15/hr minimum wage in 2019 should pause for a review of the impacts of the Jan. 1 rise to $14/hr. Photo from Wikipedia Commons.
January 27, 2018

On Jan. 1, the first phase of the Ontario government’s mini- mum-wage increase came into effect, bringing workers’ base pay to $14/hr — and the results have been less than promising.

Premier Kathleen Wynne has also vowed to raise the minimum wage to $15 by the start of 2019, so long as her party is re-elected in the June 7 provincial election.

The Ontario legislature’s independent, non-partisan Financial Accountability Office predicts the loss of at least 50,000 jobs in Ontario as businesses adjust to the wage hike. Similarly, the Bank of Canada has forecast 60,000 lost jobs, while a TD Bank report concluded that 90,000 would vanish.

The heirs to the Tim Hortons empire, Ron Joyce Jr. and Jeri-Lynn Horton-Joyce, drew Wynne’s fire after complaining about having to raise prices, roll back employee benefits and scrap paid breaks to off-set the costs of the increase.

In short, the downside of the wage hike is hitting home.

Other business owners have taken similar steps.  The Clocktower Brew Pub in Centretown, one of countless small businesses in downtown Ottawa, says it’s had to change its tip-out policies. Servers and bartenders will be asked to increase what they pay into the tip pool for other employees by 1.5 per cent, and dish- washers will now be excluded from getting a share of gratuities.

Such cutbacks and changes in workplace policies indicate that the minimum-wage increase was too much, too soon.

That’s not to say the pay hike isn’t necessary or popular. In fact, according to a poll by the Angus Reid Institute, 60 per cent of Ontarians strongly support an increase.

Economist Armine Yalnizyan has praised the increase, arguing that it will give workers more purchasing power, ultimately benefitting businesses’ bottom lines. And let’s not forget that when people make a decent wage, the general standard of living is improved.

However, both the speed at which this hike was implemented and the magnitude of such a change are two major challenges for business owners who had minimal time to prepare.

When those businesses can’t sustain the blow of an abrupt hike in wages, employees will be the first to feel it through cutbacks in benefits and hours, as well as potential layoffs.

Had the increase been rolled out over a longer period of imple- mentation, workers would have still been receiving fair wages while employers would have had sufficient time to adjust.

So one has to ask if Wynne is truly concerned about helping the most vulnerable Ontarians pay their bills and gain a livelihood, or if she’s simply waving dollar signs before their eyes in return for a vote in this year’s election?

To prove that this is a principled policy change rather than a re-election scheme, Wynne needs to postpone the push to $15 an hour.

She should establish a task force of experts and stakeholders to coolly analyze the impact — including unanticipated effects — of raising the minimum wage. She should then ask herself: Does pushing this plan further make sense for both workers and business owners? Is it truly in the long-term interest of the province?

Only if the task force’s answer is yes will it be appropriate for the Ontario government to continue with the next phase of the minimum-wage increase. It’s what a responsible and fair government would do.