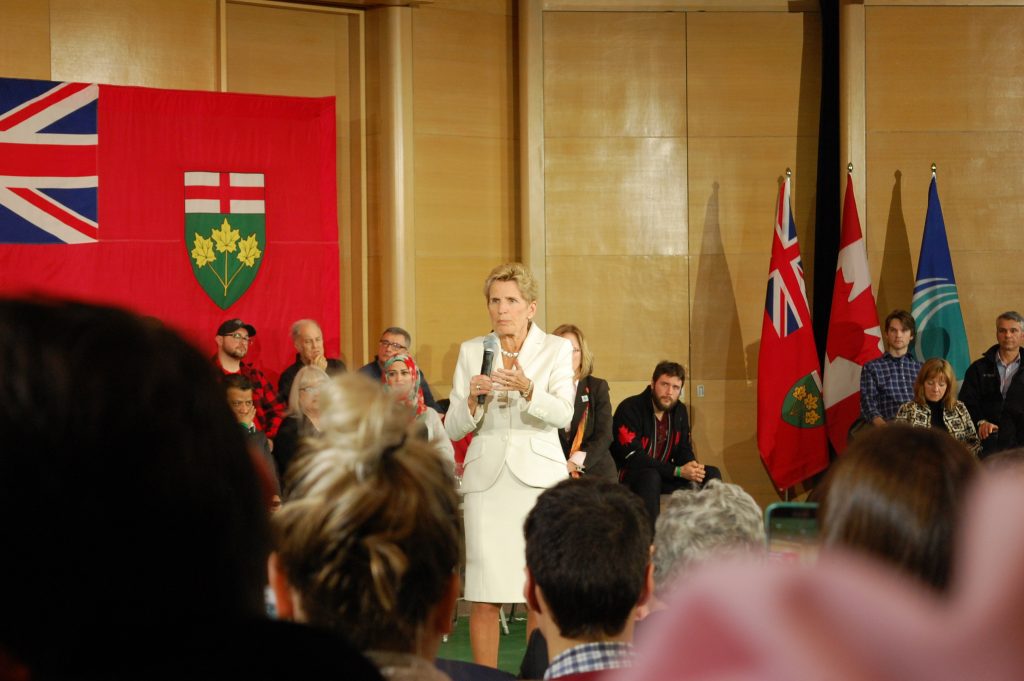 More than 300 people packed an auditorium and overflowed into the lobby at Ben Franklin Place in Nepean at the Jan. 18 event.

The bear-pit session took place just a week before allegations of sexual misconduct against provincial Progressive Conservative leader Patrick Brown — whose party had been leading the polls for months ahead this year’s June 7 Ontario election — toppled Wynne’s main political opponent.

In her first town hall of the new year and her third one in recent months, Wynne took questions from the audience for about 90 minutes.

With the provincial vote less than five months away, Wynne fielded questions on marijuana legalization, the highly controversial minimum-wage hike to $14/hour and other high-profile issues.

The question period was moderated by Cherlyn Jensen, president of Algonquin College.

The first subject of the evening was the province-wide faculty strike that saw 500,000 college students — including those at Algonquin — out of class for five weeks.

Wynne expressed regret for students who were caught up in the middle of negotiations.

“I believe in the collective bargaining process,” said Wynne, but she admitted that it was a learning experience for “how we can do this differently.”

“It is a big shift,” Wynne said, but emphasized that the safety of youth is a priority.

“At the heart of it is the attempt to make it safer,” Wynne said of the provincial marijuana legislation. “If we can undercut the black market, if we can put in place some of the controls that are in place around alcohol for example . . . And there’s more education, because I think that is a big key. We have not done a systematic education of people about what is in the marijuana that’s available today and how it is safely used.”

Bob Farmer, representing the Canadian Federation of Pensioners, asked if pensioners will be protected.

“My priority and focus would be to make sure that people who have saved all their lives and paid into a pension plan are treated fairly,” Wynne said.

A larger challenge, said Wynne, are the “many, many people who don’t have a pension at all.”

The subject of elder abuse in long-term care facilities came up more than once.

“Elder abuse…When will it stop and when will the ministry release an honest survey of the nursing homes and abuse in this province?” asked local resident Shirley Mosley.

“There is not a person in this room or in the lobby who doesn’t believe that we need to treat, in our society, elderly, vulnerable people with respect, with gentleness,” Wynne responded.

As the evening went on, the crowd grew more raucous.

As one man began to ask a question in French, someone in the crowd shouted: “English!”

At another point, a young man compared Wynne’s minimum-wage increase as “akin to socialism, which destroyed Russia under the Soviet Union.”

As Wynne thanked everyone for coming, a heckler interrupted, shouting, “You’re ruining our province!”