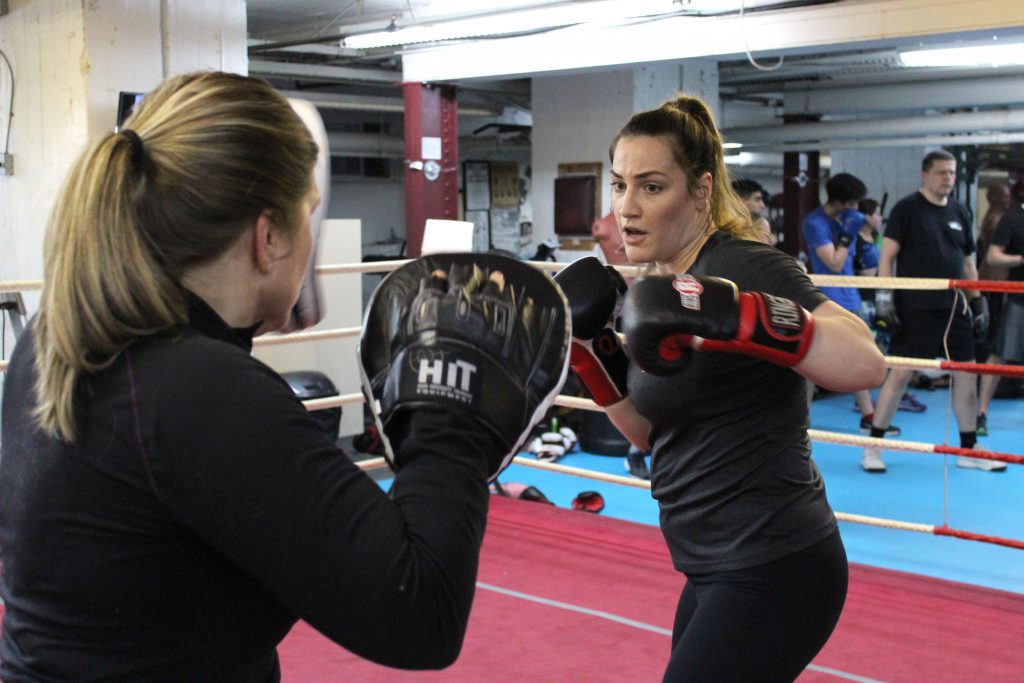 From a light morning workout, to her day job with the federal government, and then straight to Beaver Boxing for an evening training session, 30-year-old Marija Curran’s routine is relentless six days a week. It’s what she needs to do to prepare for the Canadian Boxing Championships in Edmonton at the end of March — and what she did to claim the 2017 national crown she’s defending this year.

The Burlington native, who relocated to Ottawa in 2005, trains out of the renowned Little Italy boxing club. Curran was competitive in jiu-jitsu when she was just 10 years old and was a national champion at the age of 15.

In order to improve her “hand game,” she began taking boxing lessons, her first exposure to the sport. After retiring from jiu-jitsu competition and attending grad school, Curran found the cost for recreational jiu-jitsu a little steep for her student budget, so she turned to boxing for fun.

Curran joined Beaver Boxing as part of the recreational program for two years before making the switch to competitive — and she’s been involved in the sport at a high level ever since.

“I love everything about it,” said the reigning Canadian women’s champion in her weight class. “I enjoy the routine, the discipline that comes with training, the people and the community are exceptional, the culture of it and of course I also like boxing because I’m good at it. Everyone likes winning.”

Curran is trained by Jill Perry, president and head coach of Beaver Boxing, as well as a two-time Canadian amateur women’s boxing champion.

Curran and three other Canadian female boxers travelled with Perry to Borås, Sweden earlier this month for the 2018 Golden Girl Championship, the biggest female boxing tournament in the world.

Perry said the tournament was particularly important because it allowed the Canadian athletes to be exposed to other fighting styles and athletes from other countries. A key lesson Curran said she took away from her experience at the tournament was that there is “no point stressing over things that are out of my control.”

In Sweden, Marija had two scheduled matches with two different opponents fall through back-to-back before a match finally panned out the third time around.

“I was obviously feeling a bit frustrated because you’re mentally ready to fight, and then you have to turn it off only to turn it back on again,” she said. “I boxed well, but didn’t feel like I was mentally there,” But judging by her performance in the ring, you would not assume that. Curran, competing in the elite 81-kilogram weight class, won her bout 5-0 against Norwegian boxer Martine Kjartansdottir.

This isn’t the first time Curran has left the ring and stepped onto a podium, and she’s had quite a number of impressive performances in the past year. In June 2017 at the Continental Championships in Honduras, Curran earned a silver medal and a few months later in Bulgaria at the Balkan Cup she earned gold.

Curran also earned a silver medal at the Canadian championships in 2016 before taking the national title in 2017 — a victory she hopes to replicate this year.

The growth of women’s boxing has been exponential over the past few decades, said Emilie Garneau, communications, marketing and events manager at Montreal-based Boxing Canada.

“The boxing world really took a big step in 1994 when we recognized women’s boxing for the first time,” said Garneau. “And although it took nearly two decades for the discipline to actually be added to the Olympic Games, it was the first step in the right direction.”

She attributed the sport’s rising popularity among women to a variety of things. “Fitness boxing is a great gateway for the pool of competitive female boxers,” she said. “In January 2017, a few magazines even declared boxing as the ultimate fitness craze, surpassing yoga.”

That being said, Curran noted that there are still obvious gender inequalities within the sport.

“Typically in Canada, at least in more recent years,” she said, “the girls have performed far better than the guys in competition  —and they don’t receive the same funding opportunities as the men do.”

As it stands, Curran’s 81-kilogram weight class is not yet a recognized category of competition at the Olympics. So after next month’s nationals, she hopes to represent Canada at the world championships, held this year in November in India.