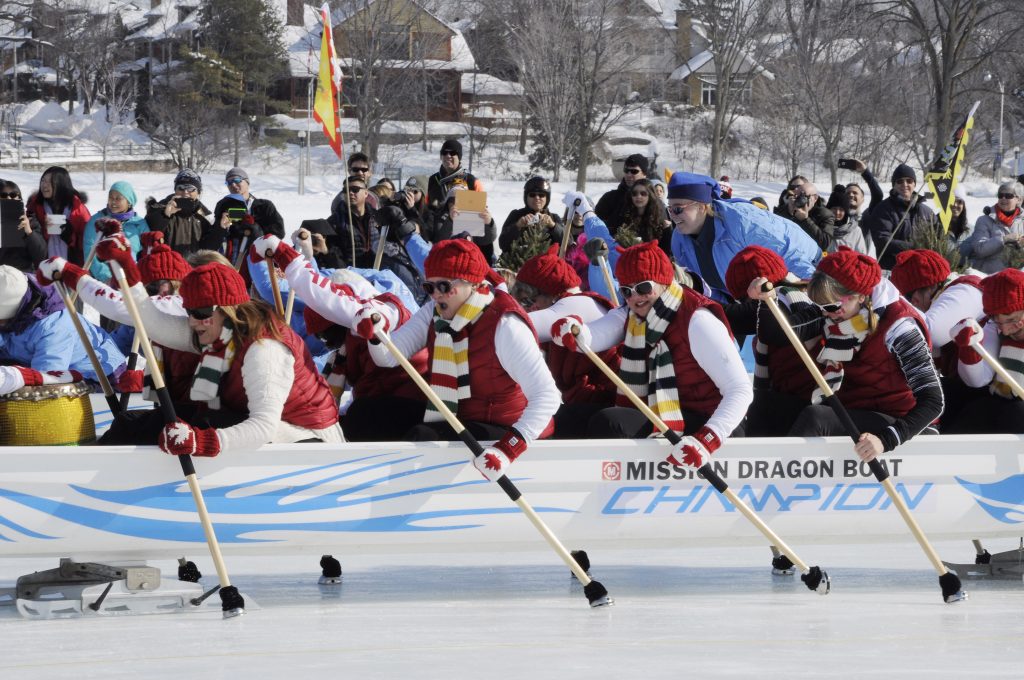 Teams from Centretown to California “paddled” their way across a frozen Dows Lake this month at the world’s largest Ice Dragon Boat Festival.

The festival held its second annual event on Saturday, Feb. 10. Teams of eight to ten paddlers — their paddles really spiked poles used to pushing their bladed canoes across the ice — raced over the ice to raise money for charities such as the Boys and Girls Club of Ottawa, Ottawa Integrative Cancer Centre and Children’s Aid Foundation of Ottawa.

Cheryl Kardish-Levitan was a member of Pink Force, a team of breast cancer survivors. She and her fellow dragon boaters were competing to honour those who have fought the disease.

“I feel very privileged and honoured. It’s exciting to be here with my teammates — and to be healthy, that’s the most important thing,” Kardish-Levitan said. “We have unfortunately lost a lot of team members over the years, so we’re here in spirit and we think about the teammates who are no longer here. But we’re here to participate and have a fun time.”

For the past 18 years, Kardish-Levitan and other breast cancer survivors have also participated in the summer Dragon Boat Race on water with a team called Just Doing It.

Teams are made up of eight to ten paddlers, one steersperson and one drummer. The highest ranked teams in each division go head-to-head in a championship race.

“We are a local group, we come from all over the city. . . . I think we’re pretty awesome, eh? How about you ladies?” Kardish-Levitan said as Pink Force and their supporters roared with clapping and cheering.

Pink Force member Susan Lim said last year was a little disappointing because of slush conditions, but this year’s colder race-day weather made up for it.

“I will do it every year that I can,” Lim said.

“Everybody had a great time. We just had better conditions this year,” said Holloway. “It’s only a two-year-old sport and a lot of room for changes and development for it to evolve.”

Holloway was the first woman to compete in both the Winter and Summer Olympics in the same year when she represented Canada for canoe sprint and cross-country skiing in 1976.

She talked about how ice dragon boat racing allows fans to get up very close to the action.

“Who doesn’t want to come down and see these monsters cross the lake? Everybody talks about it. It’s great for tourism. We’ve had people come into our restaurant operation from all over.”

Andy Church was the top individual donor and a team manager with the top fundraising team, Chinatown Showboat. This Centretown-based crew has raised money at a host of events, such as craft beer production, Glebe garage sales and cupcake bake sales. Over the past 13 years, they have raised more than $130,000 for local charities.

“We are known to be the fun team,” said Church. “Maybe a couple drinks, a couple cheers and if we win along the way that’s a bonus.”

It is all about the charities, said Richard Martin, the team captain of Chinatown Showboat. “They are doing incredible work in our community.”