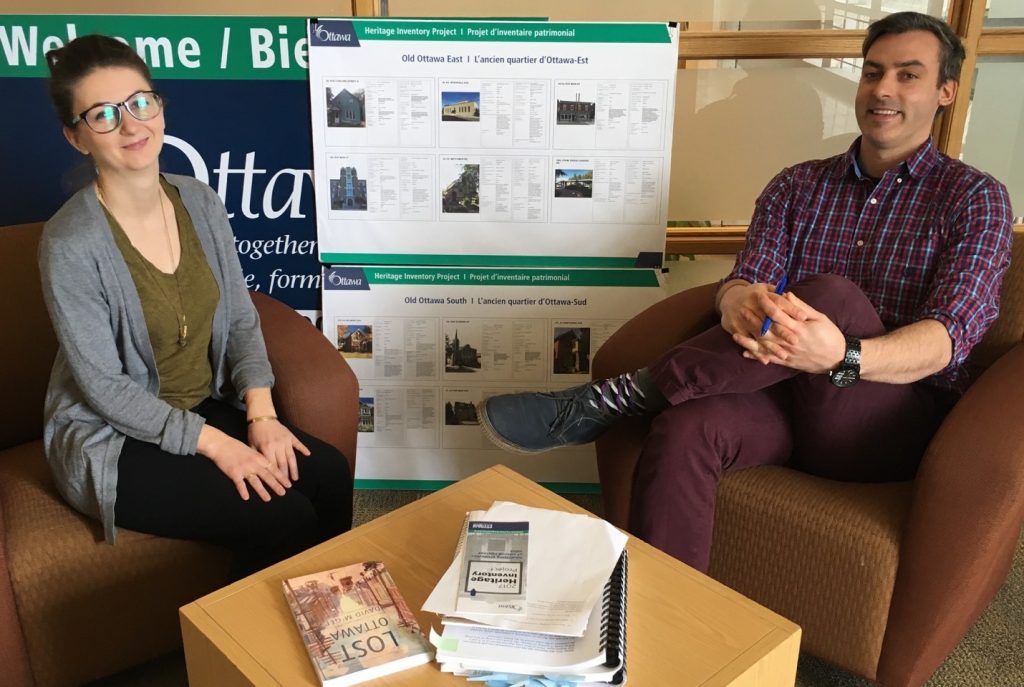 The pedestrian bridge over the Rideau Canal was also a bridge into the past for Avery Marshall, the built heritage researcher for the Heritage Inventory Project currently underway in Centretown.

Through the project, Marshall discovered that today’s Golden Triangle area between Elgin Street and the Rideau Canal used to be called Corkstown, an Irish borough where the city’s immigrant working class lived in 1839.

The Heritage Inventory Project is identifying properties of cultural heritage value or interest that are not formally designated. A property qualifies if it still reflects its original architectural style or is linked to a story valuable to Ottawa’s history.

The project is in its preliminary stages in Centretown. Marshall said they have looked at every building, and have conducted research in the area. She expects they will register about 600 structures in Centretown (between the canal and Bronson Avenue) and Centretown West (from Bronson to the O-Train line).

“Centretown is one of the earliest parts of the city — so much has happened here. It’s exciting to find buildings that reflect those stories,” she said.

The Heritage Register allows municipalities to identify sites that have cultural heritage value. Before the register, said Maloney, a heritage reference list existed from the 1980s and which had 14,000 properties recorded. However, he said the reference list was unclear, it missed many examples of cultural heritage value, and it did not include any legal obligation to preserve buildings.

As a result, a lot of structures of historical significance were lost.

While the Heritage Register does not make a property a “designated” and protected heritage property, it does compel an owner to notify the city’s heritage department 60 days before any planned demolition. That gives city officials some time to attempt to designate a building as a heritage property if worthy or preserve parts of the building that have heritage value.

Maloney said 11 people raised objections with the registry project in a meeting in August, expressing their concerns about possible loss of property value and decreased development potential of their property.

“Whether people agree or not, our concern is to apply criteria equally everywhere to determine whether properties have cultural heritage value,” said Maloney.

Christopher Ryan, a contributor to Ottawa’s Historic Apartment Buildings, said the city does not recognize the historical significance of buildings enough and the register is a good first step.

Ryan spends his free time recognizing the forgotten historical gems in Centretown in his blog Margins of History.

He understands people don’t want the aggravation of a heritage identification when they sell their property, but he says the information is important to all of us.

“When people don’t recognize the stories or identities of a building, they don’t value it.” He said many people are reacting negatively to the proposed glass-and-steel addition to the Château Laurier because they value the hotel’s history.

“Sometimes it’s not so much about the architecture, but the life the building has had,” said Ryan.

The Inventory Project is encouraging residents to come forward with any information that can help bring Centretown’s past alive.

Citizens are invited to contact heritageinventory@ottawa.ca to share information about the life of a structure they may know about.