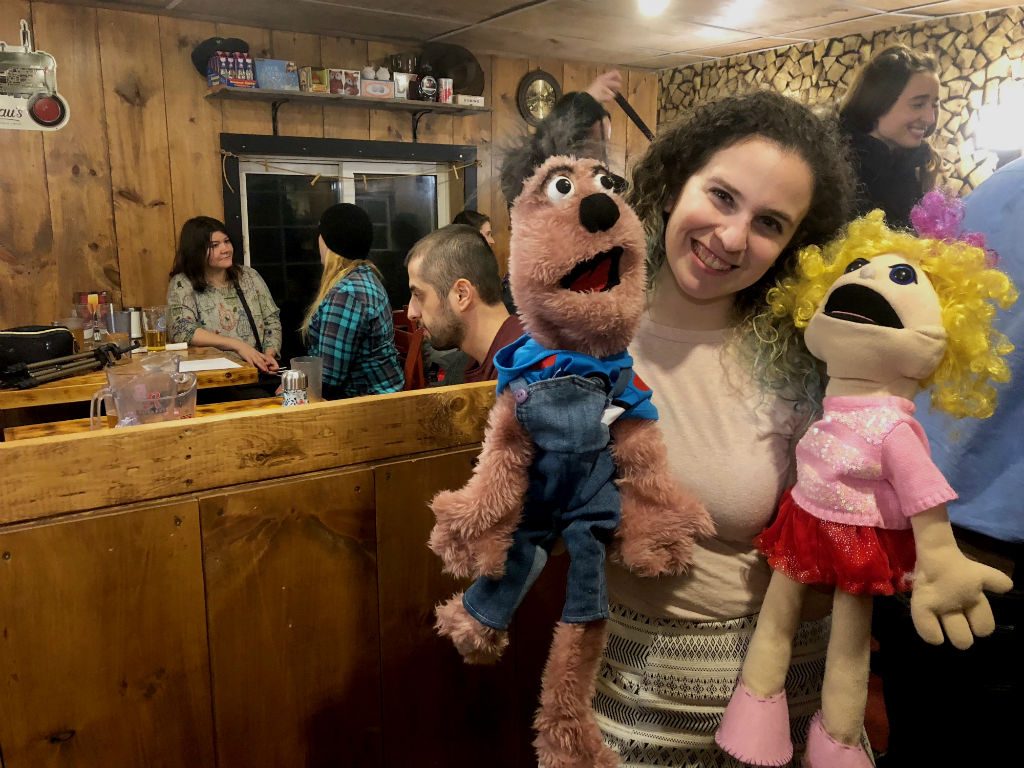 At the back of Flapjack’s Canadian Diner in Little Italy, two puppets sat across the table and stared at Lara Russo.

The puppets, handmade by her mother, Estel, made their official debut in Ottawa’s first official science slam on Feb. 9.

Science slams aren’t ordinary science lectures. Participants such as Russo prepare a five-minute presentation on a scientific topic of their choice and deliver it with a twist: no slides, no projectors and nothing traditional.

“My mom was telling me to remember to make the puppet’s mouth move more,” Russo said.

Some of the participants brought props. An apple, a satellite, and a sound board demonstrated the science of taste, fish-tracking and sound to the audience.

The panel of judges rated the slammers on their communication skills, engagement and scientific accuracy.

The local event is a branch of Science Slam Canada, a group founded by Nikki Berreth and Alan Shapiro in 2016. The idea behind science slams, however, is not unique to Canada. Similar events happen in Europe.

Berreth said the events in Europe have a distinct academic audience. The presenters there have 10 minutes to slam while using slides or projectors.

Science Slam Canada began its take on slams in 2016. The group began running regular slams in Vancouver before branching out to the rest of Canada.

“It just has been like a ball rolling downhill. It just keeps picking up speed and picking up cities and more events and people, and so it’s definitely spreading,” Berreth said.

The pair visited Ottawa last November to present at the Shaw Centre on science slams for the Canadian Science Policy Conference.

Eight participants from that initial workshop took the reins on Science Slam Ottawa and helped organize the first official event earlier this month.

“Science has this personality of hard work and long nights and crunching numbers, and there’s a lot more fun to it than that,” said Jesse Rogerson, one of the event organizers.

With science-themed jokes on hand, Rogerson warmed up the crowd before choosing the name of the next participant out of a hat.

As Russo was called to stage, she brought along her puppets as she prepared to present on the science of languages.

Russo has lived in Centretown for the past three years. She’s also lived in Montreal, but she grew up in Turkey. As Russo speaks both English and Turkish, she said she noticed the different ways she could express her emotions through language.

“In Turkish there are four ways to say, ‘I love you,’ but in English, there are only two,” she said.

“We all feel love in the same way, but we want to express it differently, and as a native Turkish speaker, it’s so hard for me to express those feelings with two words.”

On stage Russo shared the story of two love-struck puppets. The puppets spoke different languages and tried to express how they felt about one another.

“We see languages as a tool to communicate but languages also shape how we perceive the world,” Russo said.

She added that she hoped the audience saw that science isn’t as complicated or difficult as some may think.

“It’s us who make it complicated,” she said.

The sold-out event drew a crowd of 40 science enthusiasts ranging from professors to students to those who call themselves “science illiterate,” like Albert Chambers.

“They educated me. They communicated things that were interesting. I really quite enjoyed it,” he said.

Chambers said he plans on attending the next event.

Although Russo’s presentation didn’t earn her first place, she said she wants to present again and continue to share her love for science.

The next science slam is scheduled for April at the Canada Aviation and Space Museum.