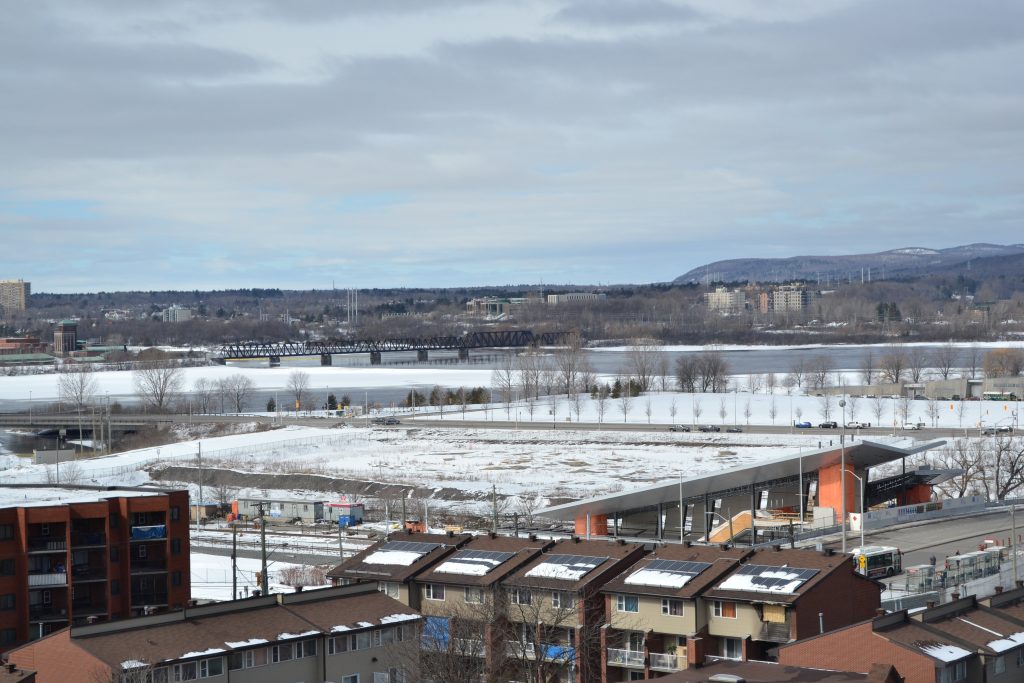 The empty land in LeBreton Flats awaits its redevelopment, but the soil that lies beneath its surface is in need of a cleanup, as well. Photo By: Meaghan Richens, Centretown News.
March 8, 2018

The soil beneath the surface of NCC-owned LeBreton Flats is the first issue the RendezVous LeBreton Group must tackle before it begins its planned redevelopment of what’s been called “Canada’s most famous vacant lot.”

The soil, exposed to generations of industrial contaminants throughout Ottawa history, must be remediated before any ground can be broken to construct the sprawling commercial and residential community proposed for the northwest corner of Centretown, including a planned new NHL stadium at the heart of the property south of the Canadian War Museum.

However, the remediation strategy “is yet to be defined at this point,” according to Mario Tremblay, the National Capital Commission’s spokesperson on the LeBreton Flats project.

“RendezVous LeBreton will be paying for the costs of the remediation. The remediation costs are taken into account in the value of the LeBreton Flats lands,” said Tremblay.

In the past, the NCC spent $6.7 million to decontaminate the soil on a 5.7-hectare site, according to the Federal Contaminated Sites Portal. The process involved removing and remediating 110,000 cubic metres of soil, enough to fill 44 Olympic-sized swimming pools.

With the current area awaiting remediation being just over three times that size at 21 hectares, RendezVous LeBreton has a considerably larger and undoubtedly more expensive amount of soil to remediate.

The total cost of the soil decontamination is undetermined at this time, but is estimated to be around $170 million, according to RendezVous LeBreton.

The NCC will not reveal the price of the land being redeveloped, only that RendezVous LeBreton is expected to pay market value for the land, including the costs of remediation.

“Normally the government does it themselves and then sells, but in this case, they are going to subtract the decontamination costs from the land price,” said Michael Powell, president of the Dalhousie Community Association.

“It’s the same thing for price and outcome, but I assume it’s easier for the developer to stage construction. Either way, contaminated soil must be decontaminated,” Powell said.

Stretching back to the 19th century, LeBreton Flats has housed many industrial sites, exposing the soil to metals such as lead, zinc and arsenic, as well as polycyclic aromatic hydrocarbons such as creosote, according to the Government of Canada.

According to the NCC’s estimated timeline for the redevelopment, the process of building the new NHL arena will be long and extensive, but the end result should be a clean area and new community space.

“We look forward to the redevelopment of LeBreton Flats and are happy to see the process continue,” said Powell. “Our hope is that it encourages a development that connects to the existing community seamlessly and has the services and supports needed for a healthy urban neighbourhood.”

During talks throughout 2018, the NCC and RendezVous LeBreton are to draft detailed terms for the master development agreement, which will be presented to the NCC board of directors. When the agreements is approved, it will be submitted to the federal government.

The NCC said negotiations are expected to continue for at least another year, with the process of transferring the land to RendezVous LeBreton starting in 2020.